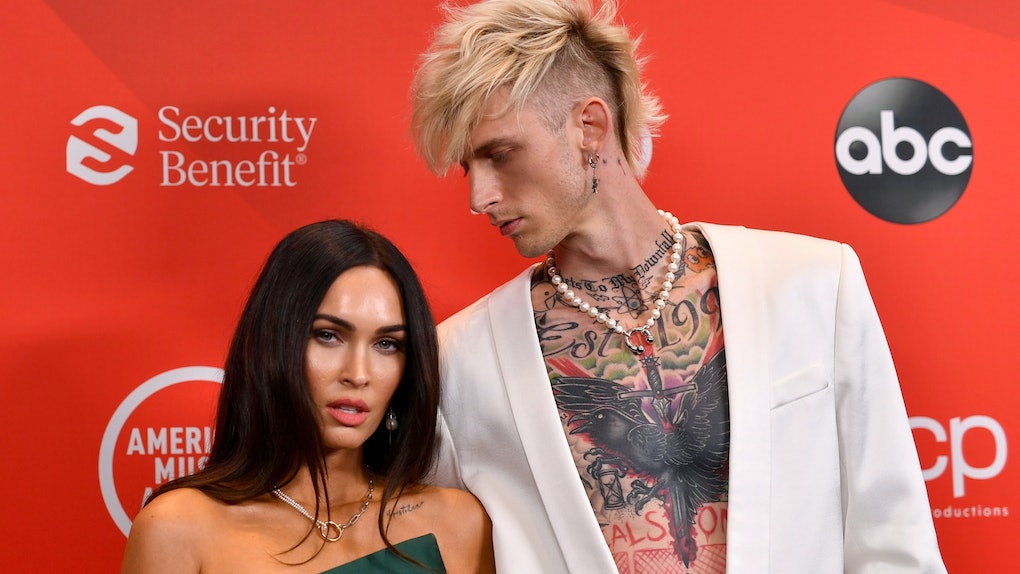 I think most people would agree it's been a rough year for romance. Because of the ongoing coronavirus pandemic, dating has become a thing of the past for some, but others have managed to find love despite social distancing measures. There are more celebrity couples who started dating in 2020 than you may realize, and these new A-list couples have given me hope by finding love in an otherwise hopeless year. Despite all the celeb breakups that occurred over the past 365 days, I can at least go into 2021 knowing I have plenty of new couples to ship.

Some of Hollywood's newest relationships are simply rumored. (If you could let me know where you stand, Zac Efron and Vanessa Valladares, that would be great.) Others have been flaunting their love loud and proud. (Keep up the good work, Megan Fox and Machine Gun Kelly.) And while a few of this year's cutest new couples have gotten engaged, others ended up breaking things off before the new year. Even if not all of these famous 2020 couples find lasting love together, I'm just glad these A-list pairs were able to remind fans love is still possible, even in this dumpster fire of a year.

In March, a source for TMZ claimed Ariana Grande was dating real estate agent Dalton Gomez, and apparently, the two had already been together for a few months. In May, Grande confirmed her relationship with Gomez in her music video for "Stuck With U," and after seven more months of quietly dating, Grande surprised fans by announcing her engagement to Gomez in December.

Like Grande and Gomez, Demi Lovato and Max Ehrich first sparked dating rumors in March, and they went public with their relationship two months later in Grande's "Stuck With U" music video. By July, Lovato and Ehrich were engaged, but after just about six months together, the couple decided to call off their whirlwind engagement in September.

After breaking off his engagement with Hannah Ann Sluss and briefly dating Madison Prewett, Season 24 Bachelor Peter Weber finally got together with Kelley Flanagan, a contestant who finished in fifth place on his season, in March. In May, they went IG official with their relationship, and though they claim they aren't in any rush to get engaged right now, they do plan on moving to New York City together in 2021.

In May, not long after she split from her girlfriend of two years, Cara Delevingne, Ashley Benson sparked dating rumors with G-Eazy, and a month later, she seemingly confirmed those rumors when she brought the rapper to her sister's wedding as her date. Benson made their romance official in a November Instagram post showing off their matching Halloween costumes, and in December, G-Eazy's birthday post for Benson made their love known. Fans even suspect the two are secretly engaged, but those rumors have never been confirmed.

During an appearance on the Little Known Facts with Ilana Levine podcast in May, actor Noah Galvin revealed he's dating Ben Platt, who first played Evan Hansen in the musical Dear Evan Hansen before passing the role on to Galvin. A few months later, Platt posted a cute pic of him and Galvin on Twitter, and in November, he celebrated their 10-month dating anniversary in his IG stories.

After months of relationship rumors, Outer Banks co-stars Chase Stokes and Madelyn Cline finally confirmed their relationship in a June Instagram post, and they've been looking loved-up together ever since.

Orange Is the New Black star Taylor Schilling seemingly confirmed she's dating artist Emily Ritz in June by re-posting a photo Ritz shared of them together on her IG story. "I couldn't be more proud to be by your side @TaylorSchilling Happy Pride!" Ritz captioned the photo. Though the rumored couple has kept their relationship quiet since then, the two are seemingly still together as of December.

Though they have yet to confirm relationship rumors themselves, multiple sources claim Zac Efron is dating Vanessa Valladares, a waitress and aspiring model from Australia he reportedly met in June. The two were rumored to have split in December, but luckily, a source for Us Weekly claimed the maybe-couple is still going strong.

Not long after meeting on the set of Midnight in the Switchgrass back in March, Megan Fox and Machine Gun Kelly sparked dating rumors, which intensified after Fox appeared in Kelly's music video for "Bloody Valentine." In July, they went public with their romance, and in December, a source for Entertainment Tonight claimed Kelly "sees marriage" with Fox in their future.

During a July appearance on the Wild Ride With Steve-O podcast, Tiffany Haddish confirmed she's dating Common, whom she first met on the set of 2019's The Kitchen. Since then, the couple has said the sweetest things about each other, and in October, Common confirmed they're still "doing wonderful" during an appearance on The Karen Hunter Show for SiriusXM.

In August, just weeks after Season 16 of The Bachelorette started filming, rumors began circulating that Clare Crawley had already found love with Dale Moss, one of her contestants. Those rumors were later confirmed when The Bachelorette premiered in September, and in November, fans finally got to see Moss propose to Crawley. Some fans even suspect the two are already married, as Crawley accidentally called Moss her husband during a December IG story, but she denied those rumors.

Fans first started wondering about Dixie D'Amelio and Noah Beck's relationship status in August when the two got cozy on the set of D'Amelio's music video for "Be Happy." In October, Beck confirmed their romance by wishing D'Amelio a happy one-month anniversary in his IG stories. Though the two briefly sparked breakup rumors in November, D'Amelio has since tweeted about wanting to marry Beck, so it seems the TikTok stars are still going strong.

While she's kept her new relationship relatively quiet, Camila Mendes went Instagram official with Grayson Vaughn in September, just about six months after the Riverdale star and the photographer were first spotted together. A month later in October, she posted a mushy birthday post for her boo, where she even dropped the L-word.

Though they started off 2020 linked to other people, Kaia Gerber and Jacob Elordi reportedly got together in September. The two have yet to officially confirm their maybe-relationship, but their many sightings together and their coordinating Halloween costumes seem pretty couple-y to me.

In September, fans first suspected Rebel Wilson is dating Jacob Busch, heir to the Anheuser-Busch brewing company, after she took him as her date to Prince Albert II's fourth annual Monte-Carlo Gala for Planetary Health in Monaco. It wasn't long before she made their relationship IG official, and she's posted plenty of loved-up pics with Busch since then.

Fans began wondering whether Jordyn Woods is dating NBA star Karl-Anthony Towns after he joined her 23rd birthday celebration in Cabo San Lucas, Mexico in September. Woods confirmed fans' suspicions soon after on Instagram, and she's shared tons of couple's pics since then, including a collection of photos for Towns' birthday in November.

Though Addison Rae Eastering and Bryce Hall's relationship status has been pretty confusing in the past, the TikTok couple finally confirmed they were together during a joint vlog in November. "We are dating and we've been dating since October 13," Easterling revealed. "We're dating officially and this is gonna be really interesting to see where this goes."

Though they have yet to confirm their rumored relationship, Rihanna and A$AP Rocky sparked dating rumors in November after they got dinner with friends. A source for People claimed the two are "inseparable" in December, and the maybe-couple spent the holidays together in Barbados, per E! News.

After Crawley rode off into the sunset with Moss, Tayshia Adams took over as the new Season 16 Bachelorette. Unlike with Crawley, it wasn't clear to fans which suitor Adams would pick, but in the end, Adams got engaged to Zac Clark during the season finale in December. The two still seem totally in love, and they have plans to live in New York City together.

Just about a year after divorcing Justin Hartley, her husband of two years, Chrishell Stause went public with Keo Motsepe, a Dancing With the Stars pro, in December. Not long after, Stause gushed about her new boyfriend during an appearance on Nick Viall's podcast The Viall Files, and Motsepe even spent Christmas with Stause's family.

I hope to see many of these celeb couples continuing to thrive in 2021!