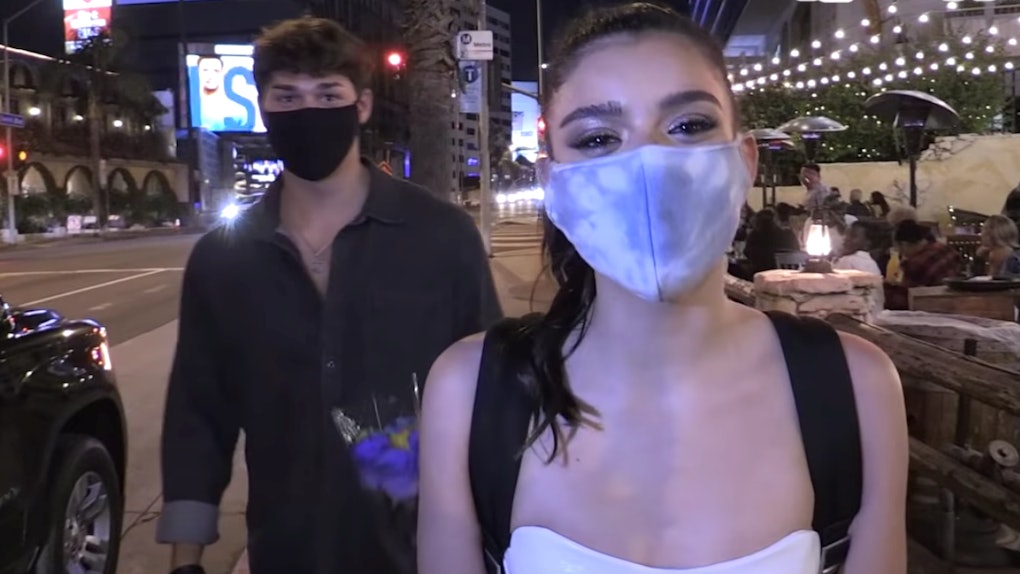 Are Dixie D'Amelio & Noah Beck Dating? The TikTok Stars Have Been Getting Flirty

Dixie D'Amelio is one of the biggest names in the TikTok world right now, and with that comes a lot of attention on her personal life. D'Amelio's relationship with Griffin Johnson was the talk of the town from early 2020 to Aug. 3, when she confirmed the two had split. Since then, fans have wondered if D'Amelio has moved on, and after some flirty nights out with another TikToker, the world is wondering: Are Dixie D'Amelio and Noah Beck dating? Here's why people are talking.

On Sunday, Aug. 30, behind-the-scenes photos of D'Amelio and Beck filming her upcoming music video were posted to The TikTok Shaderoom's Instagram page. D'Amelio could be seen with her arms wrapped around a shirtless Beck, and obviously the photos turned heads.

"Mixed emotions," one fan wrote. Another shipper was fully on board with the potential couple, exclaiming, "they would be so cute together." Other commenters were more focused on what Johnson will think of D'Amelio and Beck getting so close, sharing he's "going to be mad about this one."

Not long after the photos surfaced, D'Amelio and Beck were spotted getting cozy IRL at Saddle Ranch restaurant in West Hollywood. In paparazzi video caught by The Hollywood Fix, D'Amelio flirtatiously wrapped her hand around Beck's neck while he whispered something in her ear.

Check out the behind-the-scenes photo and flirty video below.

If these moments of PDA weren't enough to get fans talking, The Hollywood Fix caught up with D'Amelio and Beck outside Saddle Ranch as the pair were leaving together. When asked if there was anything romantic going on between them, D'Amelio simply replied, "BFFs," before one of her security guards led her away from cameras into a black SUV. Beck stood close behind them holding a bouquet of flowers.

If fans are taking D'Amelio's word for it, she and Beck are just best friends enjoying each other's company, but shippers can't help but hope there's something more than that going on with them.

It seems like things heated up between these two real quick, and eagle-eyed social media users will surely be on the lookout for more hints of a possible relationship.