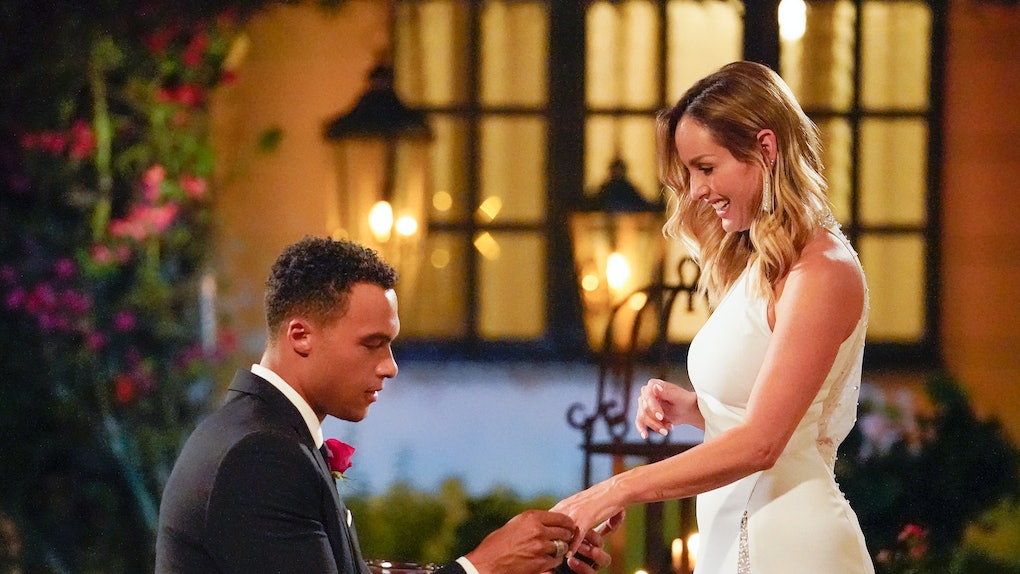 19 Celebrity Engagement Rings From 2020 You Need To See

This hasn't been a great year for... well, anything, but IMO, all the celebrity engagement rings from 2020 have seriously delivered. From classic to unique to totally on-trend, A-listers have shown off a wide range of sparklers this year. While some newly-engaged Hollywood stars have yet to give fans a good look at their diamonds (yes, I'm talking to you, bride-to-be Sue Bird), plenty of others have made 2020 (and my IG timeline) a little brighter with their new jewelry. And though I couldn't pick my favorite one if I tried, there are def a couple of standouts that deserve your attention.

If you're wondering what's trendy in the world of engagement rings right RN, just look at what the celebs are rocking. Engagement ring trends for 2020 include hidden halos, elongated cuts, solitaire diamonds, side-stone accents, and — most notably — yellow gold bands. Of course, not all A-listers followed this year's trends. From Lily Collins' rose-cut bezel-set diamond stunner to Leigh-Anne Pinnock's vintage cushion-cut black diamond rock, some of 2020's coolest celeb engagement rings are unique AF. No matter your own personal preference, there's no denying these stunning celebrity sparklers made this year just a tiny bit more bearable.

After Lily Collins and filmmaker Charlie McDowell got engaged in September 2020, she took to IG to show off her rose-cut diamond ring designed by Irene Neuwirth, complete with a bezel setting and thin gold band.

Fans weren't entirely shocked when Dale Moss proposed to Clare Crawley during Episode 4 of The Bachelorette Season 16, but they were stunned by her gorgeous ring. For Crawley, Moss chose a 4.5-carat sparkler featuring a radiant cut-center stone and two shield-cut diamonds, plus 145 smaller round-cut diamonds.

Ever since Gwen Stefani and Blake Shelton announced their engagement in October 2020, I've been eager to see a good pic of her impressive bling. Sadly, I have yet to see one, though she did give a closer peek at the rock in an Instagram Story, showing off a large, square diamond set in what appears to be a white gold or platinum band.

Glee alum Jenna Ushkowitz got engaged to David Stanley in August 2020, and not long after, she gave fans a peak at her trendy round-cut diamond set on a yellow gold band.

Victoria's Secret model Jasmine Tookes got engaged to Juan David Borrero, a Snapchat exec, in September 2020, and he wowed her with a seven-carat oval-cut diamond set on a yellow gold band and designed by Ritani. The secret to its sparkle: It also features a hidden halo and diamond-embellished prongs.

Little Mix's Leigh-Anne Pinnock's engagement ring from soccer star Andre Gray (which she received in May 2020) is perhaps the most celeb unique ring of 2020: a vintage cushion-cut black diamond, surrounded by a white diamond halo with a split shank and diamonds on the band.

Model and actor Jourdan Dunn got engaged to rapper Dion Hamilton in February 2020, and he surprised her with a oval-cut diamond stunner featuring a diamond halo and diamond pavé band.

Jenna Dewan and Steve Kazee announced their engagement in February 2020, and in an Instagram Story, Kazee showed off his fiancée's new 2.5-carat oval-cut solitaire diamond set on a gold band, which is a custom-designed piece from her friend Nikki Reed's jewelry company, Bayou With Love.

In July 2020, Brooklyn Beckham and Nicola Peltz announced their engagement on IG, and fans were dazzled by Peltz's emerald-cut solitaire diamond set on a delicate diamond pavé band.

Bachelor alum Ben Higgins proposed to Jessica Clarke in March 2020 with a unique oval-cut diamond, flanked by two round or half-moon-shaped diamonds and set on a yellow gold band.

Younger actor Molly Bernard got engaged to Hannah Lieberman in January 2020, and though she has yet to provide fans with a super close look at her new jewelry, the ring appears to feature a solitaire or three-stone ring with tiny tapered baguettes and a second curved half-crown yellow gold band.

Victoria's Secret model Martha Hunt got engaged to photographer Jason McDonald in January 2020, and a few days later, she gave fans a good look at her cushion-cut diamond with tapered baguettes in a vintage yellow gold setting.

Though Orange Is the New Black alum Danielle Brooks technically got engaged to Dennis Gellin on one of the last days of 2019, her round-cut solitaire diamond set on a diamond-adorned band is too pretty not to include.

Shout-out to these celebs for adding a little extra sparkle to this year.