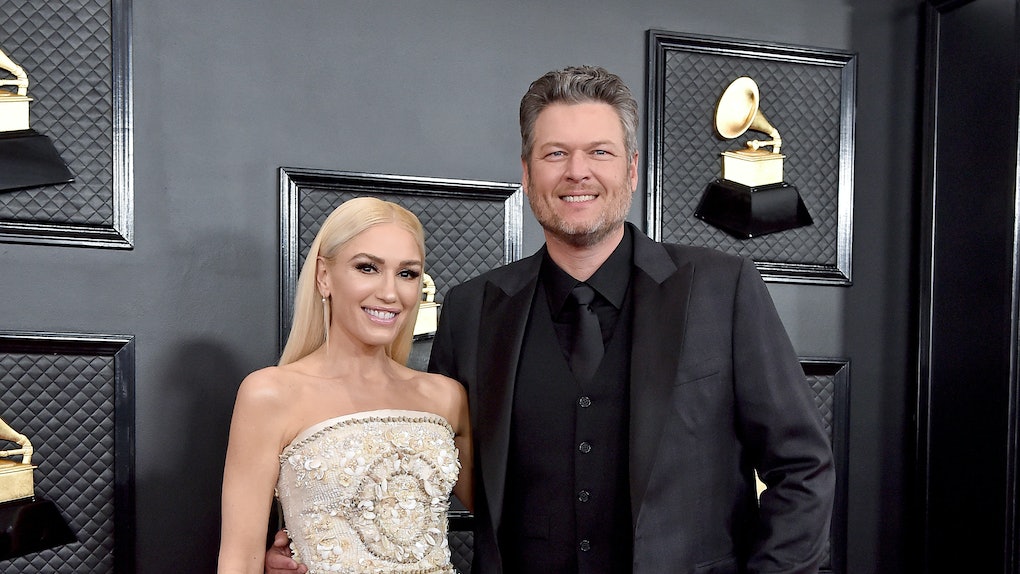 Congratulations are in order for the music industry's cutest couple! Gwen Stefani and Blake Shelton are engaged, and her Instagram announcement on Oct. 27 couldn't be any cuter. In the romantic snap, Stefani and Shelton kiss while she holds up her blinged-out hand. The caption says it all: "@blakeshelton yes please! 💍🙏🏻 gx"

Shelton shared the same photo on his feed, writing, "Hey @gwenstefani thanks for saving my 2020... And the rest of my life.. I love you. I heard a YES!"

The Instagram account for The Voice, the show where Stefani and Shelton met and fell in love, chimed in with a supportive comment: "This is the GREATEST."

The lovebirds met in April 2014 when they both joined the NBC singing reality show as coaches. They were both married at the time, but Shelton and Miranda Lambert announced their split in July 2015 and Stefani and Gavin Rossdale followed suit that August. Rumors of their romance began swirling that fall, and while Stefani didn't straight-up confirm their relationship at the time, she admitted she and Shelton bonded over their divorces. "It is kind of crazy we both went through the same thing at the same time," she told Ryan Seacrest.

Stefani and Shelton made their debut as a couple in February 2016 at the Vanity Fair 2016 Oscars afterparty and have been clearly smitten ever since. They're so tight that people apparently mistake them for a married couple fairly often.

"Do you know how many people say my 'husband' about him?" Stefani told Extra in an interview earlier this month. "I guess we're just together." Later, she added, "People got used to it or something like that... But it's pretty cute."

Thought they were married already? You're in good company. In August, Dua Lipa accidentally referred to Shelton as Stefani's husband on Jimmy Kimmel Live. "Um, well ... he's not my husband, but that sounded cool when you said it," Stefani said.

The engagement plans have apparently been in the works for awhile. In July, multiple sources reportedly claimed to Us Weekly that the couple wanted to tie the knot "as soon as possible" and wanted to go "all out" for a summer wedding, though the pandemic had thrown a wrench in their plans. "It won't be the end of the world if they have to move things back till the fall," a source reportedly added.

According to Us Weekly, Stefani and Shelton are planning two ceremonies in Los Angeles and on Shelton's ranch in Oklahoma. “Oklahoma gives the couple more privacy and the possibilities are endless for a wedding reception people will talk about for years,” a source reportedly claimed. (Elite Daily reached out to reps for the couple for comment on their reported wedding plans and did not hear back in time for publication.)

Whenever and wherever the wedding takes place, it'll be fit for music royalty. Cheers to the happy couple!