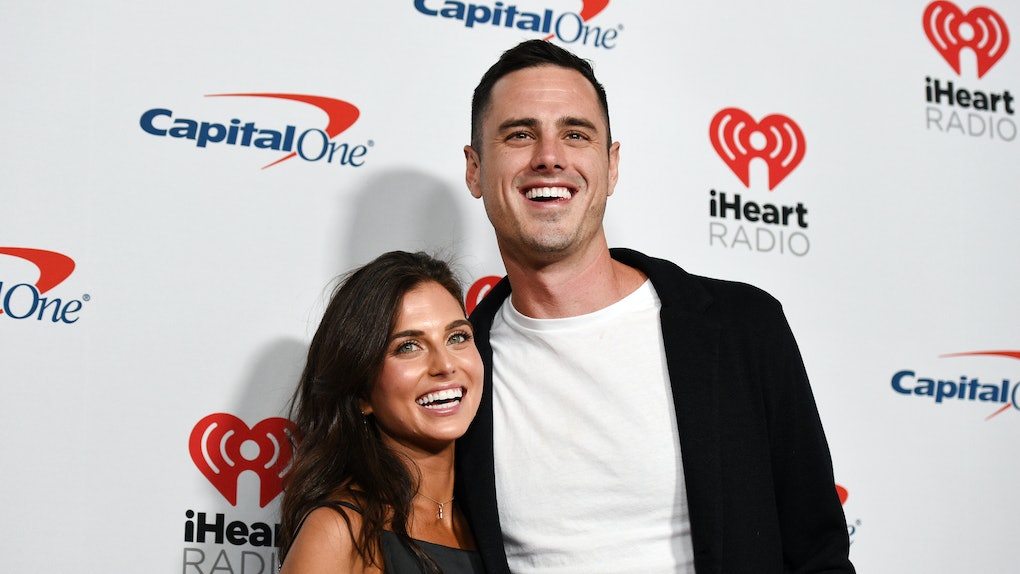 It's official, Bachelor Nation: Ben Higgins popped the question to Jessica Clarke — and when you hear the sweet story and see the jaw-dropping sparkler on her hand, you definitely won't be surprised that she said yes. On Sunday, March 29, Clarke posted a series of precious pics on Instagram showing Higgins getting down one knee in a beautiful outdoor setting, as well as the two embracing and kissing after he proposed. The real star of the show, Jessica Clarke's engagement ring from Ben Higgins, can't be seen super well in that post — but fret not, because her recent IG Story is packed with close-ups. Take a closer look and you'll discover that not only does the ring feature multiple dazzling diamonds, but it also includes two of the hottest engagement ring trends for 2020.

In her March 29 IG post announcing the engagement, Clarke wrote "I don’t remember everything you said, but I know that I said yes. I woke up in a dream today and I get to live in this dream every day from now on (eeeep)." Speaking of dreams, let's take a closer look at the ring, shall we? In her Instagram Story, Clarke's ring is prominently displayed on her hand as she gently pets their dog. She tells followers that she and Higgins were going to wait until after the weekend to post about their engagement, but decided to go ahead and share the news early — and again, her hand is visible in the frame throughout much of the video.

According to Kathryn Money, SVP of merchandising and retail expansion for Brilliant Earth, Clarke’s three-stone ring features what appears to be an estimated 2.5-carat oval diamond, flanked by two round or half-moon shaped diamonds, and set on a yellow gold band. Depending on the quality and specific characteristics of the center gemstone, Money estimates that the ring is worth between $30,000 and $50,000. Oval-shaped diamonds are one of the most popular engagement ring trends for 2020, and three-stone rings have been on the rise ever since Meghan Markle debuted her rock with that setting. Fun fact: this style boasts some super romantic symbolism, as the three stones represent friendship, love and fidelity, — or, a couple's past, present and future.

The ring is undeniably stunning, but what makes it really special is that Higgins had it custom made for Clarke, and spent several months working with Denver-based Gnat Jewelers on the design.

"I'm pretty happy with it," he told ET Online, adding that it was a "big team effort."

You may remember that back in November of 2019, Higgins actually hinted that he might be popping the question soon, telling former Bachelorette and Extra's correspondent Rachel Lindsay, "I don’t want to say when it could happen, but if you come to these live shows, it could possibly happen live onstage.”

Higgins originally planned on proposing in Central Park in early March, when he and Becca Kufrin were slated to co-host “The Bachelor: Live on Stage” in New York City, according to Entertainment Tonight. However, when that event was cancelled due to the coronavirus outbreak, Higgins had to go back to the drawing board and come up with a new idea. While the couple has been quarantining with Higgins’ parents, he decided to drive them to Franklin, Tennessee to pop the question in front of her family (but kept the reason for the trip a secret). Higgins admitted to ET Online that he was super nervous, but fortunately, his updated plan went off without a hitch.

"This is exactly how I would have wanted it to be," Clarke told ET Online. "Central Park would have been magical and special in its own way. But it's really cool that we just got to be together last night and not really have to talk to anyone else but my family. It was great. It was perfect. I couldn't imagine it a better way."

Since Clarke's ring was custom-made, you won't find an exact replica of it anywhere — but if you can't stop swooning over her rock, here are a few look-a-likes to consider.

Higgins and Clarke, who went public about their relationship in February 2019, met via Instagram after Higgins slid into her DMs. How's that for modern-day romance?

“I’ve shared some ups and downs,” he told ET Online in an exclusive interview. “But now it’s time for a new chapter, and I think that excites me. It’s a chapter for me to have a lot of peace when it comes to romantic love, a lot of confidence in our partnership and who we are to each other ... I’m not going to break this girl’s heart and I know she’s not going to break mine. It’s time to start a new, more confident journey forward.”

For her part, Clarke added that the ring is “never coming off” and honestly fam, can you blame her? Just! Look! At the sparkle!