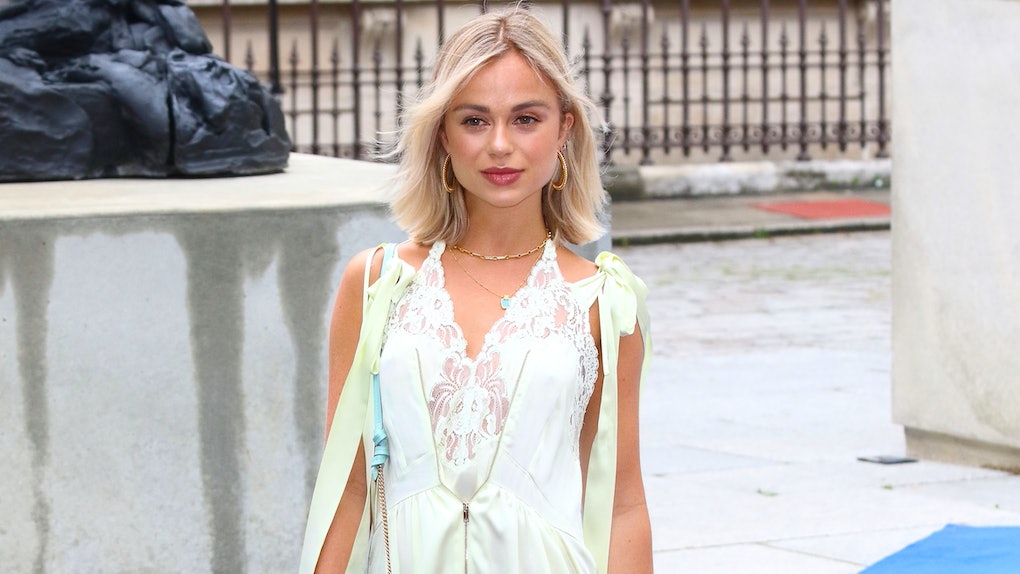 Romance is in the air for the royal family these days — first Princess Beatrice and Edoardo Mapelli Mozzi tied the knot in early July, and now Lady Amelia Spencer and Greg Mallett are engaged. Notably, Spencer's engagement ring has some strikingly similar features to the rock worn by her late aunt, Princess Diana (which now belongs to Kate Middleton). And luckily for all royal fans and stans, Mallett's Instagram announcement features some adorable post-proposal photos which offer a phenomenal glimpse at the ring.

According to The Daily Mail, Spencer and Mallett met while studying at the University of Cape Town. They had reportedly been dating for 11 years (according to her father's recent congratulatory tweet) when he popped the question on July 22 at the Clouds Wine and Guest Estate in Stellenbosch, South Africa. The boutique hotel and working wine farm happens to be "situated on one of the world’s most beautiful mountain passes" (the estate's words).

Mallett, a real estate agent and the nephew of the former South African national rugby coach Nick Mallett — shared some heartwarming pics from the proposal on Instagram, and can we please talk about that eye-catching rock? Who What Wear reports that it was designed by Charles Greig Jewellers, and features an oval diamond surrounded by a glittering halo and set on a slender pavé band.

If the sparkler looks familiar, it might be because Princess Diana's ring (which was somewhat controversial at the time) happened to have an oval-cut center stone encircled by a halo as well — although hers featured a sapphire instead of a diamond. Interestingly, many other royals have sported oval-cut engagement rings throughout the years, including Sarah Ferguson and her daughter, Princess Eugenie.

“So this was the best day of my life," Mallett wrote in his IG caption. "22nd of July 2020, I asked the love of my life to spend the rest of her life with me and she said YES. Couldn’t be happier and I love you with all my heart @ameliaspencer15."

Unfortunately, Spencer's IG account is private — but Mallett has shared countless adorable photos of the couple over their last decade together that you're free to peruse (and swoon over) at your leisure. Spencer's father also got in on the social media celebrations when he not only confirmed the engagement via Twitter but also revealed one sweet deet: that Mallett asked for his blessing before the proposal.

Spencer's father, Earl Charles, is the late Princess Diana's younger brother, which makes her a first cousin of Prince William and Prince Harry. Her father and mother, Victoria Aitken, divorced in 1997. According to The Daily Express, Spencer and her siblings grew up in the Constantia area of Cape Town, and she and her two sisters were present at the legendary royal wedding of Prince William and Kate Middleton at Westminster Abbey in 2011. The news outlet reports that while her sisters and brother attended Prince Harry and Meghan Markle's big day in 2018, Spencer herself was MIA.

"So happy for my daughter, Amelia, engaged to her boyfriend of 11 years, Greg," he tweeted along with a photo of the happy couple. "It’s wonderful to hear them both so excited about their future ... Sending them both love, and every good wish for their life together."

Spencer's older sister Lady Kitty, a model and socialite, is currently engaged to multi-millionaire fashion tycoon Michael Lewis — which begs the question: Will the sisters share their special day in an epic double royal wedding? (*Crosses fingers.*) No details are known yet about their upcoming nuptials, but it's safe to say that if it's happening in the next year, it may need to be a somewhat low-key affair (due to the coronavirus pandemic). Regardless of where and when they wed, one thing's for sure: Spencer and Mallett's wedding is bound to be gorge.

More like this
Is Katie Thurston Engaged After 'The Bachelorette'? Her Instagram Is Sus
By Joyann Jeffrey
Are Clare Crawley & Dale Moss Engaged Again? This Update Has Fans Convinced
By Candice Jalili
Sophie Turner & Joe Jonas' Pics From Their Vegas Wedding Are Such A Vibe
By Cianna Garrison
Stay up to date