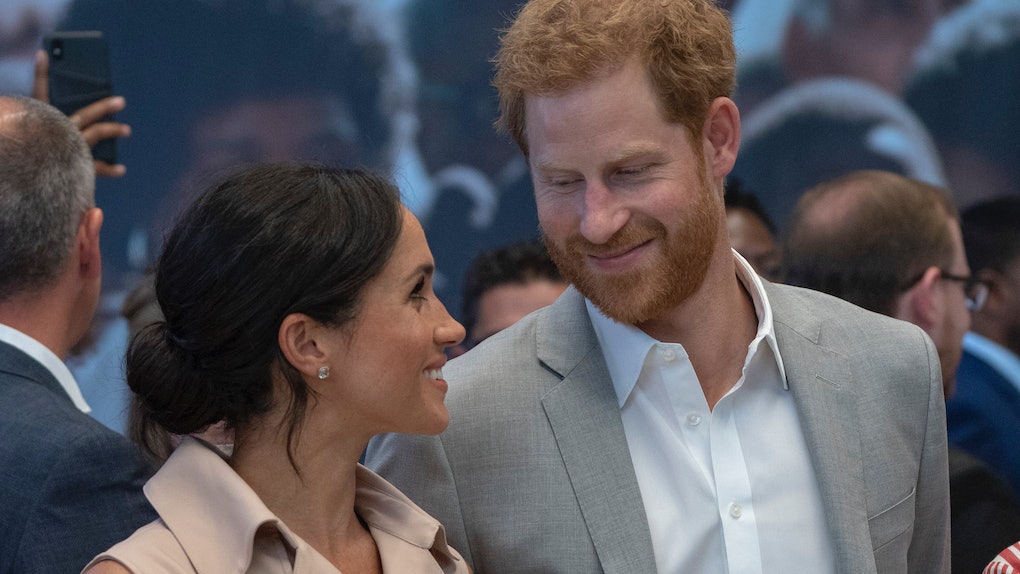 Obviously, everyone in the world knows that Prince Harry and Meghan got married on May 19, 2018, because it was the most fabulous event of the decade. But, what happened before that? Did their love story just drop from the sky? Obviously not. The new Duke and Duchess of Sussex have come a long way, and their relationship is pretty spectacular.

Unlike Prince William and Kate Middleton, though, these two newlyweds didn't meet in college, and their relationship certainly didn't have as many ups and downs as Will and Kate's did. But still, the history of Meghan and Harry's relationship is seriously sweet. And as the two continue to be adorable, let's take a look back at all they've been through.

It started with a blind date.

Like a Hallmark movie come to life, Prince Harry and Meghan met when their friends introduced them on a blind date. During their first official sit-down interview with BBC after their engagement was announced, Prince Harry revealed that they met through a mutual friend.

"Ah yes, we first met — we were introduced actually by a mutual friend," he said. This all went down in July 2016, meaning they were together about a year-and-a-half before they got engaged.

After that, things got serious pretty quickly.

Sometimes, you just know, you know? At least, that certainly seems to have been the case for these two. In their engagement interview, Prince Harry explained that during their first date, they were already planning when to see each other again.

"So we went and met for a drink then, I think, very quickly into that we said, 'What are we doing tomorrow? We should meet again.'"

Ugh, this is the stuff of fairytales, y'all.

They traveled together soon after.

Since both Prince Harry and Meghan are busy people, it wasn't easy for them to coordinate more casual dates and ways to see each other again. So they decided to go to Botswana, instead!

"And then it was I think about three, maybe four weeks later that I managed to persuade her to come and join me in Botswana," Prince Harry said during their engagement interview. "And we camped out with each other under the stars, we spent — she came and joined me for five days out there, which was absolutely fantastic."

You know, just your casual second date camping under the stars in Afirca. Whatever.

In October, the world caught on to their romance.

All good things must come to an end, and in October 2016, news broke that Harry and Meghan were dating, with a source telling Express, "He's happier than he's been for many years."

So even though their time away from the spotlight had run out, it still seems as though they were happy, and that's what truly matters.

But then, things got ugly.

This is why we can't have nice things! Shortly after their relationship was made public by anonymous sources, Harry had to take a stand. Tabloids were making horrible comments about Meghan and following her and her family around relentlessly. In response, Kensington Palace released a statement from Harry on the matter, asking that all abuse and rumors be put to a stop.

I mean, it's super sexy that Prince Harry stood up for his girl, but also super sad that it happened in the first place.

A few months later, Markle shuts down her blog.

In an unexpected move, in April 2017, Meghan shut down her lifestyle blog, The Tig [hyperlink]. According to Vogue, Markle wrote to her fans, "After close to three beautiful years on this adventure with you, it’s time to say goodbye to The Tig."

Obviously this might not seem like a big deal, but after dating Prince Harry for nearly a year at that point, Meghan shutting down her blog probably might have had something to do with her relationship — especially considering that upon marrying him, her career would have to shift completely. Maybe even then, she knew that their relationship would become something more.

In September 2017, Markle opened up about their relationship.

In a huge interview with Vanity Fair for the magazine's October 2017 cover, Markle finally addressed her relationship with Prince Harry, in her own words.

"We're two people who are really happy and in love. We were very quietly dating for about six months before it became news, and I was working during that whole time, and the only thing that changed was people's perception. Nothing about me changed. I'm still the same person that I am, and I’ve never defined myself by my relationship."

As you probably already know, in November 2017, Prince Harry and Meghan announced their engagement, and Meghan moved into Kensington Palace with her boo thang.

After that, it was a whirlwind of excitement, joy, and wedding planning.

May 2018 will obviously go down in history.

Prince Harry and Markle's wedding was a day to remember. It was beautiful, emotional, adorable, and perfect. On May 19, the two were married at St. George's Chapel at Windsor Castle. It was the perfect cherry on top of their love story.

Seriously, Prince Harry and Markle have had an incredible love story — and that story will only keep getting better.