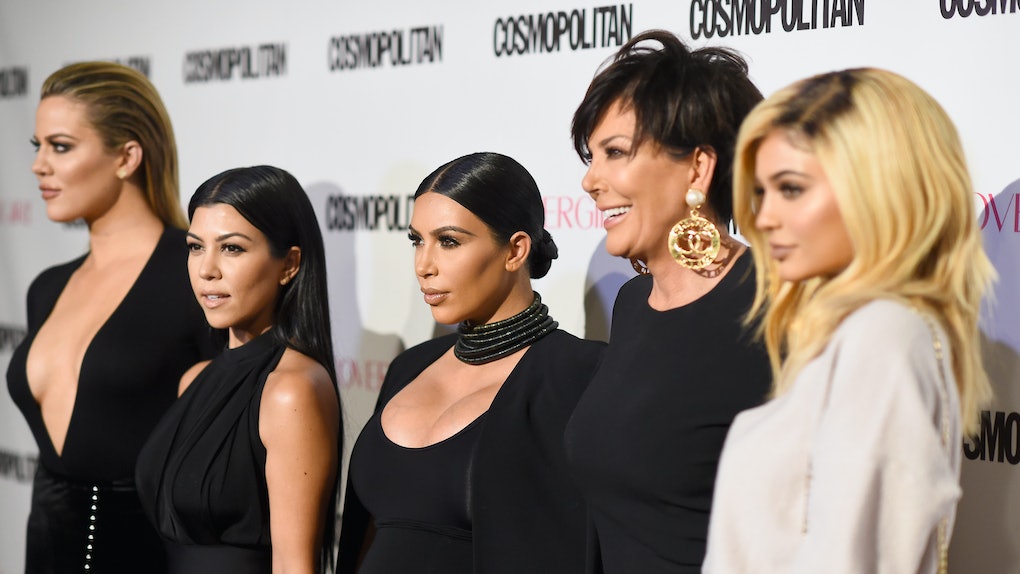 365 Things The Kardashians Did In 2017, Because We're Always Keeping Up

Say what you want about the Kardashian-Jenner family, but there's no denying these reality stars work. As 2017 comes to a close, it's a great time to look back and enjoy the best moments from our favorite family. Sit back and get ready to take in 365 things the Kardashians did in 2017:

4. Kylie pulled some buns out of the oven.

6. Kim announced she was expecting a baby via surrogate.

7. North West declared she wanted to start a YouTube channel.

14. Keeping Up With The Kardashians celebrated 10 years on-air.

16. Khloé and Tristan dressed up as Khaleesi and Khal Drogo.

24. Kylie went to the zoo with Jordyn Woods.

25. Kourtney lounged in the sun.

26. Kendall sat out of the Victoria's Secret Fashion Show.

29. Kendall became the highest paid model in the country.

30. Khloé kissed Tristan by the pool.

32. Khloé, Kourtney, Kim, Kylie, Kendall, and Kris were on the cover of The Hollywood Reporter.

33. An entire season of Life of Kylie aired on E!

41. Kendall was welcomed into the Adidas family.

43. The Kardashians took a trip to Cleveland.

44. Kim introduced creme and powder contour kits to the world.

48. Kendall showed off her butt at the Met Gala.

49. Kris got her grandkids holiday pajamas.

52. People thought Kim had drugs on her counter in the background of a Snapchat, but it turned out to be the pattern in the marble.

54. Khloé and Tristan did a couples workout.

55. Dream Kardashian had the most expressive eyebrows.

57. Kim dressed up as singer Selena Quintanilla for Halloween.

63. KKW Beauty made us shimmer with Ultralight Beams powders and gloss.

65. Kourtney dressed up as Michael Jackson for Halloween.

68. Kris would not confirm or deny any pregnancy rumors about her daughters.

70. Kim properly taught us how to contour.

71. Khloé and Malika were BFF goals.

73. Karla Kardashian (aka Ellen DeGeneres) announced she was pregnant.

76. Kendall was on the cover of Bazaar.

77. Kourtney and Kim took a walk on the beach.

79. Kourtney took her kids to Disneyland.

80. Kim appeared on the cover of Vogue Mexico.

81. Kendall showed us her everyday makeup routine via Vogue.

82. Kylie and Jordyn Woods flew on a private jet.

92. Kim and Michael Cheban (aka foodgod) dressed up as Sonny and Cher.

96. Kendall hung out with Cara Delevingne.

97. Kris went out to eat with the foodgod.

104. Kendall rang in the New Year in a black slip dress.

105. Kourtney's kids won a unicorn at a carnival.

109. Kim had a Cher-inspired photoshoot.

111. Kendall hung out with Tyler The Creator.

112. Kim opened up about the struggles of surrogacy.

114. Kim announced the gender of her third child on Ellen DeGeneres.

115. Kim says North would make a better President than Trump.

116. Scott was rumored to be dating Bella Thorne.

117. Kylie brought back camo print with items from Kylie Shop.

118. Kourtney and her kids had full Americana vibes over Fourth of July.

119. Kylie rocked a short, blonde bob at the Met Gala.

124. Blac Chyna got a restraining order against Rob Kardashian.

132. Kourtney looked amazing in a swimsuit.

133. Scott and Kourtney went on a helicopter ride.

137. Kourtney and Kendall danced drunk in a store.

140. Kylie had an ice sculpture of her butt at her birthday party.

143. Kylie claimed a paparazzi photo of her was photoshopped.

144. Dream had her first birthday.

146. Kylie and Jordyn dressed up as fire and ice for Halloween.

156. Kourtney went on an elliptical.

159. Kendall posed in her underwear.

160. Khloé made a New Year's resolution for Kim.

161. Kylie cranked out more Kyshadow palettes than ever before.

165. North wore slide sandals with fur on them.

168. Khloé consistently had the most organized closet, ever.

170. Kylie ran into Tyga at Coachella.

180. Lamar Odom talked about Khloé being there after his overdose.

182. Khloé and Kylie showed they look a lot alike with blonde hair.

186. Kim covered herself in body glitter.

199. Kourtney took her kids to church.

203. The Kardashian sisters bought Funyuns for a girls trip.

204. Khloé showed us that Evian spray is her travel essential.

207. Scott and Sofia went on a boat together.

209. Penelope wore sneakers with a dress.

212. Khloé hung out with Steve Harvey.

213. Kylie spent time with her nieces and nephews.

215. Kourtney posted a throwback photo of her grandmother.

221. Kourtney and Younes Bendjima dressed up as Bonnie and Clyde for Halloween.

225. North and Penelope had a joint birthday party.

226. Kourtney showed us the real way to rock a LBD (little black dress).

227. Khloé and Kourtney Snapchatted together.

228. Khloé did a photo shoot for Good American.

231. Khloé cheered on Tristan while courtside at his game.

232. People lined up to go to the Kylie Cosmetics pop-up shops.

233. Kim carried a purse that looked like a giant wad of cash.

236. Scott showed off his fancy cars.

237. Kendall asked people to donate to Charity Water for her birthday.

239. Kim took a photo blowing a kiss to the camera.

242. Kris posted a throwback picture of herself and Kim.

242. Kourtney and Younes went to a concert.

244. Kim made a milkshake with vanilla ice cream and oreos.

245. Khloé posted a video of Tristan practicing on Snapchat.

246. Scott posted a black-and-white photo of himself.

248. Kylie posted fan art of her and a little kid.

249. North and Penelope dressed in Moana costumes for their birthday.

250. Bella Thorne said her and Scott are "just homies."

251. Kourtney Snapchatted the Ghostbusters car in a driveway on Halloween.

255. Kendall went to a basketball game with Hailey Baldwin.

256. Kourtney dressed up as the Tin Man from Wizard of Oz.

260. Kim admitted she looks at a poster of Khloé's butt when she squats.

261. Kourtney had needles rolled around on her face.

264. Kim got a customized Judith Leiber bag that said "Saint."

269. Khloé shared tips to get bikini ready in just one week on her app.

273. Kourtney shared a Thanksgiving mimosa recipe on her app.

274. Kendall hung out with Naomi Campbell.

276. The Kardashian-Jenner sisters took a bathroom selfie at the Met Gala.

277. Kim shared her secret to keeping her email inbox at zero.

278. Kim admitted North has some sibling rivalry with Saint.

280. Kendall walked the runway in Cannes for Fashion For Relief.

281. Kim had strawberries on top of her birthday cake.

283. Kim opened up about the struggles of surrogacy.

286. Kris Jenner made an Instagram collage for Father's Day.

287. Kourtney and Kylie hung out in bikinis.

288. North and Penelope continue to be BFFs.

289. Kourtney reportedly went on a date with Diddy's son.

293. Scott posted a picture of his kiddos on the hood of a Mercedes.

297. Kourtney made a Valentine's Day gift guide that included a creepy doll.

298. Khloé was accused of posting a racist photo on Instagram.

299. Kourtney posted a sweet message to Penelope for her birthday.

300. Kim shut down rumors that she's having twins via surrogate.

301. Kourtney skinny-dipped for a shoot.

302. Kim says that she won't speak for anyone else except herself amid pregnancy rumors.

303. Khloé gave us more details about being in love with Tristan.

305. Blac Chyna went to the VMAs without Rob.

307. Kim was accused of posting a picture in blackface.

309. Kim drank a sardine shake instead of speaking about her sister's pregnancy rumors.

311. Kim gave us all a meditation playlist on Spotify.

312. Khloé appeared on an episode of Hollywood Medium.

314. Kendall and Kourtney went on The Ellen DeGeneres Show.

316. Kendall and Kylie introduced us to their model cousin, Natalie Zettel.

320. Kim explained the inspiration behind the crystal bottle design for KKW Fragrance.

321. Rob took back all the cars he gave to Blac Chyna.

322. Kris Jenner texted her response about the pregnancy rumors to Ryan Seacrest.

323. Kim and Kanye were rumored to be the inspiration behind some tracks of Taylor Swift's Reputation album.

324. Kris said Kylie is "equipped to handle whatever comes her way."

326. Kim introduced us to ScreenShop.

328. People got mad at Kendall for using a fist bump emoji.

331. Kendall received backlash for supposedly not tipping a bartender.

336. Kendall and Kylie threw a banger at Coachella.

338. Kendall's Pepsi ad was parodied a lot on the internet.

339. Kim had a panic attack during an episode of KUWTK.

340. Diddy reportedly cropped Kendall and Kylie out of a photo.

345. Kylie shared a picture of a pretty pink butterfly ring on Instagram.

346. We learned how Kanye and Travis Scott actually know each other.

347. People think North was wearing a corset and it turned out to definitely not be.

348. Kylie and Travis Scott make us feel weird in "Sheer."

352. Kim did her best impression of Kourtney for Ellen DeGeneres.

354. Kylie and Jordyn Woods tried on lipsticks in a YouTube video.

357. Kris wore a Jennifer Lopez-inspired dress while covering the Oscars.

358. Kim and Kanye looked chic out in public together.

362. Kylie and Travis Scott went to a basketball game together.