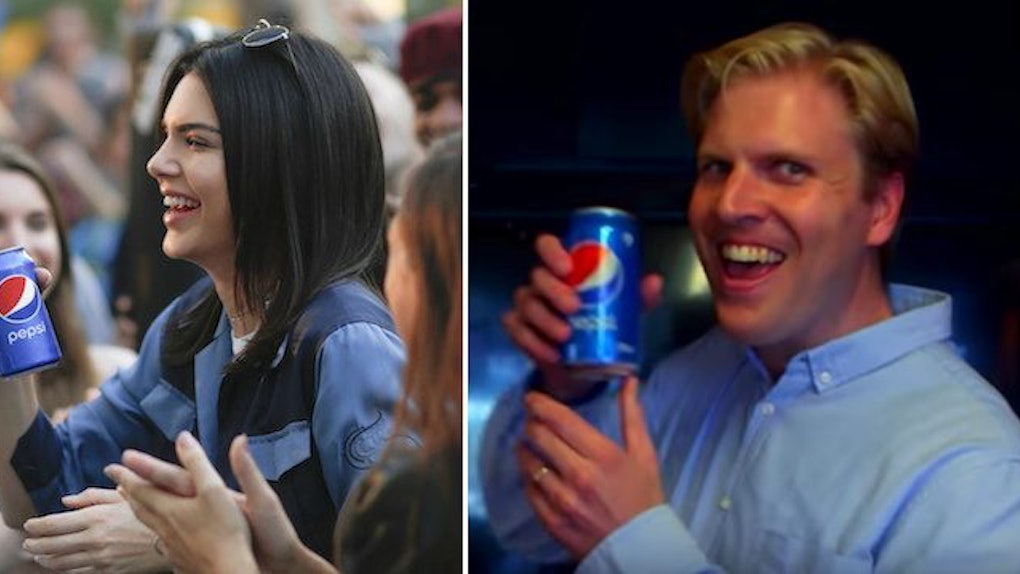 It doesn't look like Pepsi will be catching a break anytime soon.

The company's been under fire since Tuesday after releasing a controversial advertisement starring Kendall Jenner titled "Live For Now Moments Anthem."

While many people appeared to be upset regarding the commercial's unintentional glamorizing of police brutality, others were disgusted by Pepsi's misguided attempt to recreate an iconic Black Lives Matter moment.

The moment comes toward the end of the ad when 21-year-old Kendall Jenner spots a line of police officers in the distance as she marches with protesters.

She grabs a can of Pepsi and hands it over to the officer. He takes a sip and smiles as the crowd of "protesters" cheer Kendall on. The two-minute ad then ends, leaving viewers with more questions than answers.

That particular moment seemed to be a recreation of the moment Ieshia Evans stood up to law enforcement while protesting the death of Alton Sterling in Baton Rouge, Louisiana last year.

Since its release, Pepsi has pulled the ad and issued a statement explaining itself and apologizing to Kendall Jenner.

Despite the statement ensuring the company's well-intentioned approach with its latest marketing stunt, people are still poking fun at Pepsi for being "tone-deaf."

Some genius created a hilarious parody mimicking Pepsi's "Live For Now Moments Anthem," and it's GOLD.

The hilarious Pepsi ad parody created by Australian TV show "The Feed" is simply titled "The World According to Pepsi."

Since Pepsi already used up the police brutality angle, the first problem we're faced with is climate change.

In the first scene, a man informs an audience at the United Nations building that we've basically destroyed Earth.

In dire need of a "miracle," the day is saved by none other than a can of Pepsi!

In the next scene, the issue at hand is the Israeli-Palestinian conflict.

"I guess we're gonna go another year without peace then..."

Um, not on Pepsi's watch!

The parody continues with over two minutes of hilarious jabs at Pepsi for its outrage-sparking advertisement starring Kendall Jenner.

While the sketches are comical, you can't help but realize how they highlight how "tone-deaf" Pepsi's ad really was.

But THAT'S the point!

Check out the full parody below.

Citations: Pepsi gets a taste of their own ridiculous medicine with clever parody (Mashable)