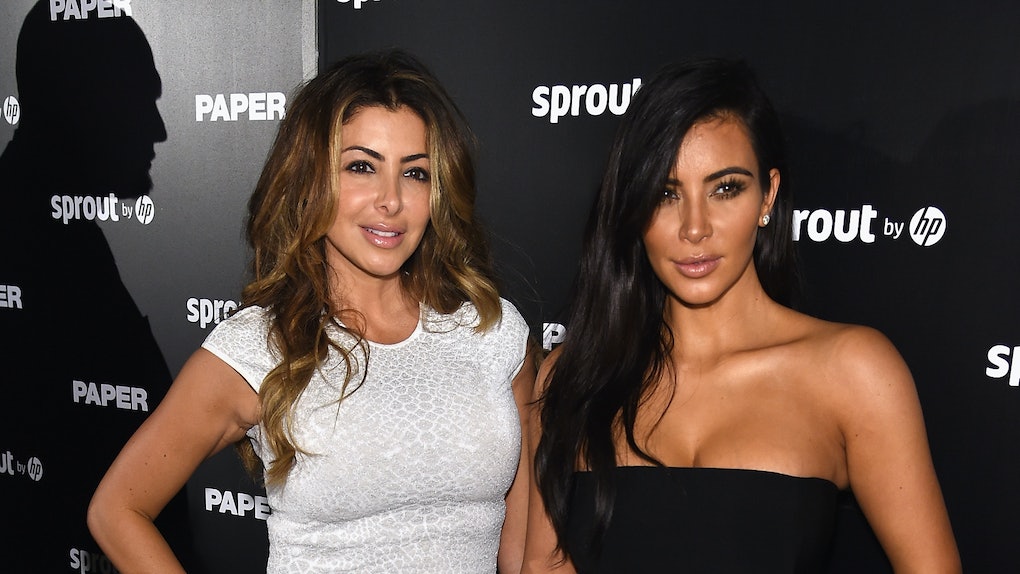 These Celebrity Friendship Fallouts Were Beyond Shocking

It would be nice to think each person who enters our lives will turn into a forever friend, but that's simply not the case. Friendships come and go, and even the most promising camaraderie can sometimes crumble. Friends who once went together like coffee and creamer can wind up mixing more like oil and water. No one knows this more than the Hollywood elite, who seemingly fly through more friendships than anyone else. I'm still recovering from these eight celebrity friendship fallouts.

In terms of severity, celebrity friendship fallouts can sometimes be as intense as the end of a romantic relationship. Fans love a good celeb duo, and when one person loses their sidekick, it's a devastating blow. To make matters worse, celebrities are forced to see their friendship fallouts play out in the public eye. Bitter spats are often aired out on Twitter or in interviews. When it comes to certain superstars, like Kim Kardashian, for example, her breakups and makeups are broadcast on national television for all to see.

Perhaps nothing should shock us about celebrity relationships at this point, but the end of these friendships definitely caught fans by surprise.

It was truly the end of an era when fans realized Pippen and Kardashian hadn't been hanging out as much throughout the course of 2020. The friends had had a close friendship since at least 2011 when Kardashian first introduced Pippen to fans on Kourtney and Kim Take Miami. But by the end of summer 2020, Pippen confirmed the end of their friendship. The Kardashians and Pippen unfollowed each other on Instagram in July, and Pippen admitted they were done for good during a Nov. 9 interview with The Hollywood Raw.

The kicker? she blamed their fallout on Kim's husband, Kanye West. "He talks so much about me being this and that and this and that," she said on the podcast. "I just feel like Kanye was in a place where he really didn’t trust anyone with Kim.”

Once attached-at-the-hip besties (and roommates), Woods and Jenner ceased communication in February 2019 after Tristan Thompson (Khloé Kardashian's then-boyfriend) and Woods were spotted kissing at a house party. The dramatic incident drove a wedge between Woods' relationship with the KarJenners, and spurred Thompson and Khloé to break up.

To this day, Woods and Jenner haven't made amends, at least not that fans know of. Woods did apologize for her part in Thompson's second cheating scandal in a March 2019 episode of Jada Pinkett Smith's Red Table Talk, however.

SelGo & Lovato were practically Disney friendship royalty. They were both staples on the children's network, starring in Wizards of Waverly Place and Sonny with a Chance in the late 2000s, respectively. But their friendship actually goes back even further than that. The gals first met in 2002 when they both starred on Barney & Friends. There's a lot of history between them, but their friendship hasn't always been an effortless one.

Things seemed to get murky in 2010 when Sel started spending more time with Taylor Swift. That year, Lovato seemed to shade her friend in an interview with Girl's Life. "We're both busy, and I wish the best for her," she said (Per E!). "True friends don't let their friends or family be mean to you. If you can't trust somebody, you can't be friends with them."

Thankfully, the girls later made up, hitting the InStyle Awards red carpet together in October 2017 in a major show of solidarity.

For a minute there, fans were seriously worried the iconic BFF duo was a thing of the past.

Ah, the infamous spat between two of the biggest pop stars in the world. Swift and Perry were industry friends until they got into it in 2014. Swift accused Perry of stealing dancers from her Red Tour when three dancers (who had previously danced for Perry) decided to leave Tay's tour halfway through to go dance on Perry's Prismatic tour.

This didn't sit well with Swift, who went on to write "Bad Blood" about the situation. Swift all but admitted so during a September 2014 interview with Rolling Stone where she mentioned "someone" did something horrible to her. "She basically tried to sabotage an entire arena tour. She tried to hire a bunch of people out from under me," she said, without mentioning Perry by name. The singers also both dated John Mayer, which probably didn't help the situation.

Luckily for fans of both pop stars, they made amends in 2019 by exchanging baked goods and Perry's iconic cameo in Swift's "You Need to Calm Down" video.

Thorne and Mongeau dated from September 2017 to February 2019. When they called it quits romantically, they promised fans they would remain friends and keep things amicable. Unfortunately, that plan didn't last very long. When Mongeau ended up getting engaged to Jake Paul a mere few months later, Thorne was less than thrilled, posting a now-deleted set of photos of herself with puffy red eyes (seemingly from crying) captioned, "When ur ex gets engaged."

Two years later, Thorne released a song called “Stupid F*cking B*tch,” which accused Mongeau of using her for clout. “You wanted me for clout, and I should’ve thrown you out," she sang in one verse.

Needless to say, the pair are no longer friends at all.

There was a time when Conrad and Montag's friendship seemed rock solid. The stars appeared as besties on The Hills from 2006 to 2010 and had each other's backs through thick and thin in the show's earliest episodes.

Things took a dramatic turn when Spencer Pratt, Montag's now-husband, waltzed into the picture and created tension in the show's third season. Most of the drama that ensued stemmed from Lauren's belief that Heidi and Spencer were the ones who ignited rumors she had a sex tape with her ex-boyfriend (rumors she denies).

The girls tried to make amends, but their friendship ultimately fell apart, ending with Conrad's infamous line: “I wanna forgive you, and I wanna forget you.”

Perry and K-Stew were good pals until 2013 when Perry started hanging around Stewart's ex, Robert Pattinson. Despite insisting they were just friends, the media had a field day with their friendship, speculating it was something more. This drove a wedge in the two ladies' friendship, forcing Perry to reach out in an effort to make amends with Stewart.

In an interview with Elle magazine, she said: "I sent her a text message saying, 'I know you've seen all this stuff but you know I would never disrespect you. I'm not that person. I'm just trying to be a friend to him but it is unfortunate that I do have a set of tits.'" Still, the friends seemed to have drifted apart after the incident.

The Simple Life co-stars were one of the most-iconic friendship duos of all time in the early 2000s, but things took a downward spiral in 2005 when they stopped speaking completely for reasons they never divulged to the public.

"It's no big secret that Nicole and I are no longer friends. Nicole knows what she did, and that's all I'm ever going to say about it," Hilton said in a statement. While the two stars have since made amends, it was never made clear what exactly sparked their rift, and they seemingly never became as close as they once were.