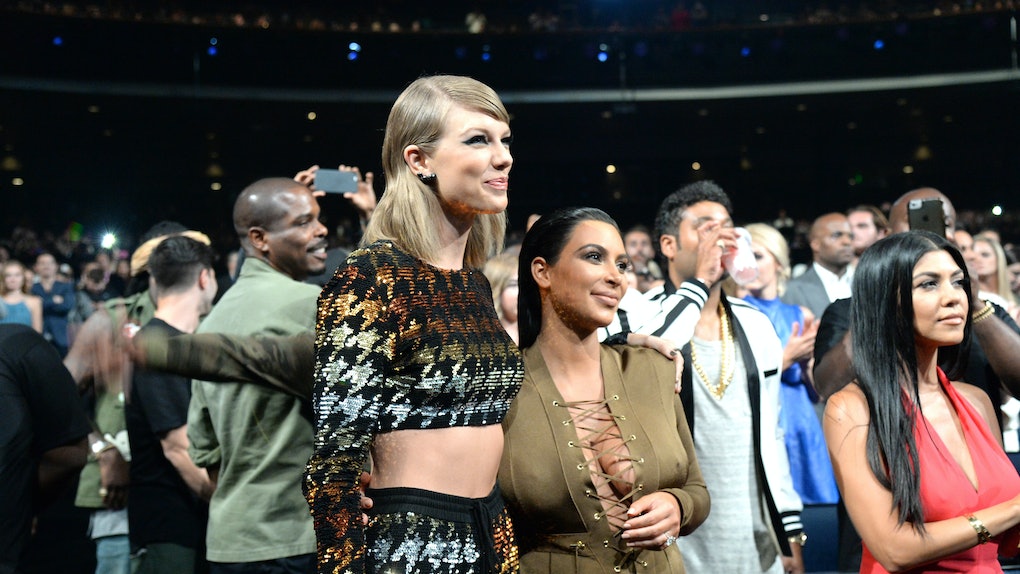 It's been nearly four years since Kanye West released "Famous," a song with controversial lyrics about Taylor Swift. Since then, Swift, West, and Kim Kardashian have been embroiled in an ongoing he-said, she-said about whether or not Swift gave West permission to use the lyrics. New footage of West and Swift's phone call prior to the release of the tune was leaked on March 20, and now Swift and Kardashian are both speaking out. Taylor Swift's Instagram about her phone call with Kanye takes the focus off the situation — or, aimed to.

Swift took to Instagram on March 23 and attempted to put an end to the questions about the newly-leaked footage by asking her followers to instead focus on what's going on in the world right now because of the coronavirus pandemic.

Swift opted to not address the situation — or people involved— by name. She simply referred to the phone call as "the one that was illegally recorded, that somebody edited and manipulated in order to frame me and put me, my family, and fans through hell for 4 years." Elite Daily reached out to Kardashian's team for comment on Swift's Instagram, but did not hear back.

In her next IG Story, Swift encouraged her fans to donate to the World Health Organization and Feeding America to help during this crisis.

Sadly, if Swift was aiming to draw attention away from the drama, her post had the opposite effect.

Kardashian fired back in a series of tweets that began with the reality star saying she was not planning to comment on the situation until she saw Swift's post. Elite Daily reached out to Swift's team for additional comment, but did not hear back in time of publication.

Just as Swift and Kardashian voiced their feelings, so did Swift's publicist, Tree Paine.

It was Kardashian's tweet that read, "To be clear, the only issue I ever had around the situation was that Taylor lied through her publicist who stated that 'Kanye never called to ask for permission…' They clearly spoke so I let you all see that. Nobody ever denied the word 'b*tch' was used without her permission," that caught Paine's attention.

In response to Kardashian, Paine tweeted: "I’m Taylor’s publicist and this is my UNEDITED original statement. Btw, when you take parts out, that’s editing. P.S. who did you guys piss off to leak that video?"

Let's hope this puts an end to this war of words once and for all.