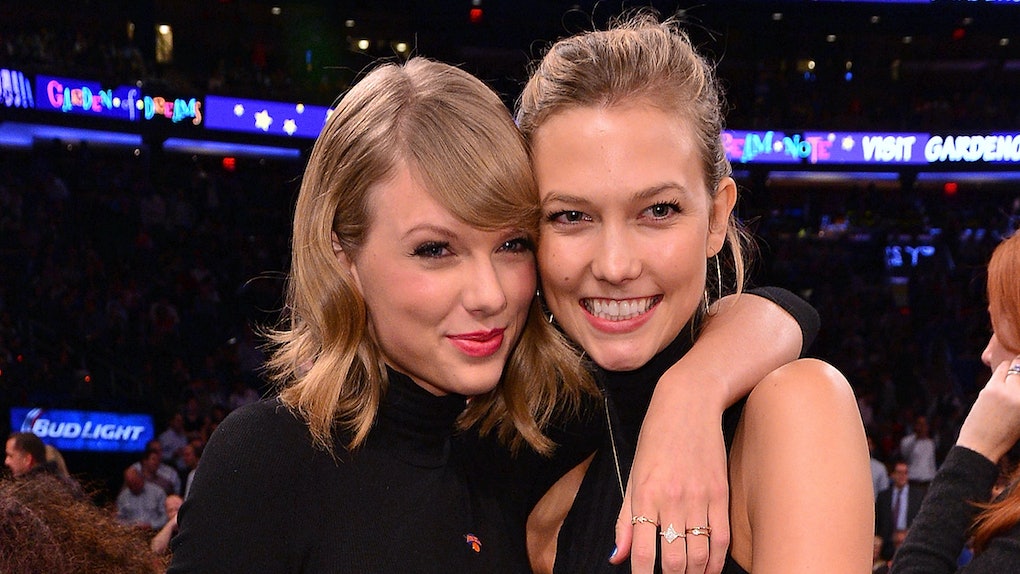 Did Taylor Swift & Karlie Kloss Date? Here's A Timeline Of Their Rumored Romance

Kaylor believers, unite! Ever since Folklore dropped at midnight on July 24, 2020, fans have been feverishly dissecting lyrics, looking for evidence of Taylor Swift and Karlie Kloss's rumored romance. "Betty" in particular has Kaylor stans convinced the former friends might have been more than friends, just like several songs from Lover were interpreted as potential odes to the model. While Swift and Kloss insisted on several occasions they were nothing more than friends, there's no denying their friendship was intense AF, which is why it was so disheartening when the two appeared to drifted apart. (Elite Daily reached out to reps for Swift and Kloss about the romance rumors but didn't hear back in time for publication.)

Soon after the singer and model hit it off at the 2013 Victoria's Secret Fashion Show, their friendship became the stuff of legend. Together, the famous duo baked cookies, drove up the California coast, spent the night at each other's apartments, and showed each other lots of IG love. It didn't matter that Kloss spent the entirety of her friendship with Swift in a relationship with Josh Kushner — fans were convinced the Swift-Kloss romance was real. Let's review the entire saga of Kaylor, shall we?

At the time of her Vogue cover story in January 2012, Swift hadn't yet met Kloss, but after seeing a photo of her, Swift claimed she loved the model and would like to "bake cookies" with her. Soon after the story was published, Kloss tweeted at Swift, taking up her invitation. "Hey @taylorswift13 love the @voguemagazine cover!" she wrote. "Your kitchen or mine?"

They Officially Met In November 2013

Almost two years after Swift gave Kloss a shoutout in Vogue, she and the model actually met in person at the 2013 Victoria's Secret Fashion Show, where Swift performed and Kloss worked the runway. "We met at the show," Kloss told HollywoodLife during a December 2013 interview. "We'd never met before but we're BFFs now." She also her time on stage with Swift was her favorite part of the show.

During a February 2015 interview with Vogue, Swift said they were introduced by a mutual friend, Kloss' fellow Victoria's Secret model Lily Aldridge. "...we were just like, 'You. My friend. Now,'" Swift joked. She even hung a photo from their first meeting in her apartment with the handwritten caption, "BEST FRIENDS FOREVER VS2013."

A few months after hitting it off at the Victoria's Secret Fashion Show, the two took a road trip to Big Sur in California, taking plenty of photos and pitstops along the way. Kloss captioned a pic of the two jumping in the air with a red heart emoji, and she posted another pic that showed her writing their names in the sand with a heart in between "Karlie" and "Taylor." Though Swift has since deleted her own posts from the trip, her pics included a black-and-white shot of Kloss kissing her on the cheek.

Swift later told Vogue in February 2015 they came up with the idea for the trip at an Oscars after-party. The two ran into each other at the event, and Kloss suggested they do something spontaneous together. "I'd been to Big Sur once before, and I was like, 'We should just do it,'" the singer said.

For her Rolling Stone cover story in September 2014, Swift gave a tour of her penthouse in the Tribeca neighborhood of New York City, and she was sure to point out the guest room "where Karlie usually stays." According to Rolling Stone, the room had a "basket of Kloss' favorite Whole Foods treats next to the bed," as well as "multiple photos of her on the walls."

Just days after Swift and Kloss walked hand-and-hand down the runway at the 2014 Victoria's Secret Fashion Show, TMZ published fuzzy photos of the two seemingly kissing at The 1975's concert in New York City on Dec. 4. Swift's rep quickly shut down the rumors, telling Us Weekly, "It's sad that on the day it's announced Taylor has three Grammy nominations for 'Shake It Off,' I have to shake off this crap."

Swift also responded to the rumors, joking in a (since-deleted) Dec. 8 tweet, "As my 25th birthday present from the media, I'd like for you to stop accusing all my friends of dating me. #thirsty."

They Appeared On 'Vogue' Together In February 2015

A few months later, Swift and Kloss appeared on the cover of Vogue together, and their cover story dove into the history of their friendship and explained why they were so compatible. "People had been telling us for years we needed to meet," Swift told Vogue. "I remember makeup artists and hair people going, 'Doesn't she remind you of Karlie? God, she and Karlie would be best friends. They're the same."

Kloss mentioned she and Swift had even started dressing alike. "The other night I came over and we were both going someplace from here, and we were both wearing black crop tops and high-waisted skirts. It's kind of getting weird," she recounted. The article was accompanied by several videos, including one where Swift and Kloss took a "friendship test" and declared each other as her "best friend."

Around the same time, Swift ended her 15-month relationship with Calvin Harris and started maybe-dating Tom Hiddleston. Her two-month romance with Hiddleston escalated super quickly, which made people question whether it was a legit relationship or publicity stunt.

The first sign of strain in Kloss and Swift's relationship came in August 2016, soon after Kim Kardashian released a recording of the infamous convo between Swift and Kayne West (and just days after Swift posted a mushy IG tribute for Kloss' 24th birthday). When asked during an interview with Sunday Times Style whether she thought Kardashian "was a good person," Kloss hesitated before saying, "I think she's been a lovely person to me in the past. Look, I really don't know her that well."

Kloss later took to Twitter to make clear whose side she was on. "I will not allow the media to misconstrue my words," the model wrote. "Taylor has always had my back and I will always have hers."

Kloss Gushed Over Swift On Her Birthday In December 2016

In honor of Swift's 27th birthday, Kloss took to IG to gush over her friend, writing, "Happiest of Birthdays to my ride or die @taylorswift ❤️🎂👯❤️ I feel blessed to count you as my friend, sister and partner in crime. Can't wait to celebrate together very soon." Kloss also included a polaroid snapshot of Swift kissing her on the cheek.

For Swift's 28th birthday, Kloss had far less to say, which isn't surprising, since the two hadn't been photographed together in a year. Still, she posted a selfie of her and Swift with their faces close, which she captioned, "Happy happy birthday @taylorswift! 💫."

Kloss Supported Swift On Her 'Reputation' Tour In August 2018

After months of speculation about where the two friends stood (even though Kloss listed Swift as one of her "closest friends" in a March 2018 interview with The New York Times), Kloss seemingly put rumors to rest by attending the Nashville stop of Swift's Reputation tour. "No one puts on a show like @taylorswift 🎤✨," she captioned her backstage Instagram selfie. "Nashville was out of this world, I am SO proud of you 🖤."

In October 2018 (soon after Kloss's name didn't appear on Swift's T-shirt of squad members in her "Look What You Made Me Do" music video), Kloss once again denied rumors of bad blood. During a "73 Questions" segment with Vogue, Kloss assured fans she and Swift were "still really good friends."

Swift and Kloss's once-close relationship seemed over for good when Swift failed to attend Kloss' wedding to Josh Kushner on Oct. 18, 2018. She was also conspicuously absent from Kloss and Kushner's second wedding celebration eight months later. Kloss' rep later told Page Six Swift was "unable to attend due to prior commitments."

The final straw: In August 2019, Kloss was spotted on vacation with her manager, Scooter Braun, which was soon after Braun acquired all of the rights to Swift's first six albums.

On July 23, 2020, the same day Swift announced the suprise release of her eighth studio album, Folklore, Kloss posted a pic on Instagram of herself hanging out in the woods. Considering Folklore's album cover shows Swift in the middle of a forest, fans couldn't help but wonder if Kloss' Instagram was a quiet nod to the album.

No matter what actually went down between Swift and Kloss, I know this: I will always be a loyal Kaylor supporter.