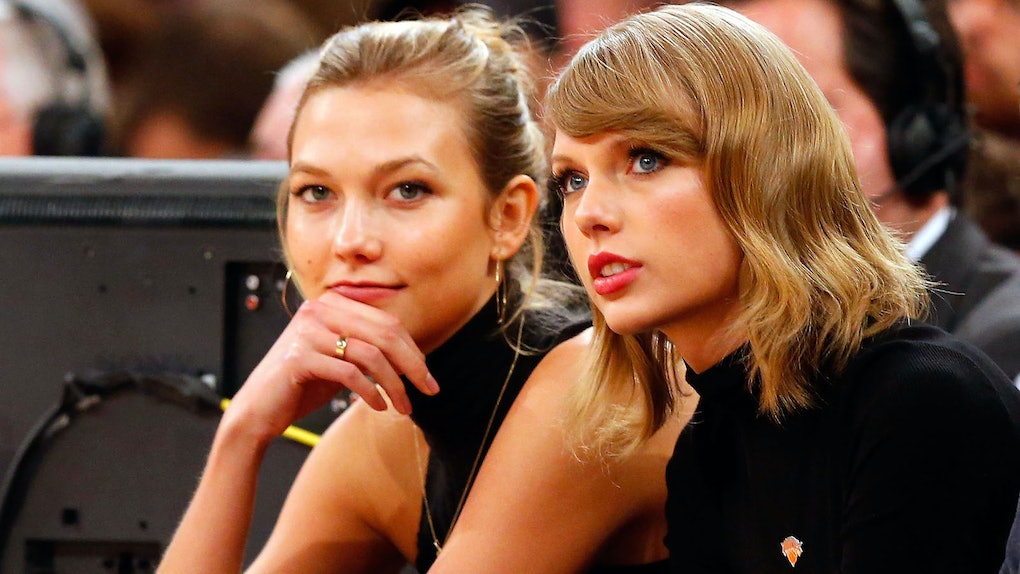 Is Taylor Swift’s “Betty” About Karlie Kloss? The New Song Is Fueling A Popular Theory

Folklore is already being hailed as one of the most personal and artistic albums of Taylor Swift's entire music catalog, with songs that link to personal experiences and imagination. Since the songs are rooted in reality and Swift's personal life, but blurred with her vivid imagery, fans are trying to dig deep to figure out who and what each song is about. One popular theory is that Taylor Swift's "Betty" is about Karlie Kloss, and here's why fans think so.

Swift surprised fans with Folklore's release, announcing the album on Thursday, July 23 followed by its midnight drop on Friday, July 24. Since the album hit, fans have been sharing a ton of theories on Twitter, trying to unpack the whole suitcase that is Folklore. Swift did reveal that the album was a culmination of personal experiences and her vivid imagination due to isolation during the coronavirus pandemic. "In isolation, my imagination has run wild and this album is the result, a collection of songs and stories that flowed like a stream of consciousness," Swift said in an Instagram post. "Picking up a pen was my way of escaping into fantasy, history, and memory. I’ve told these stories to the best of my ability with all the love, wonder, and whimsy they deserve."

While her songs are full of "whimsy," so are the theories concocted by Swifties. The most popular theory is that "Betty" is actually about Karlie Kloss. The theory is a bit complicated, but started due to Swift revealing in a live chat with fans that three of the songs on Folklore were about a "Teenage Love Triangle," and the pairing explores that triangle "from all three people’s perspectives at different times in their lives." The characters are Betty (James' girlfriend), James, and a girl which John cheated with. Fans identified the songs as "Cardigan" (Betty's perspective), "August" (another girl's perspective), and "Betty" (James' perspective). Most importantly here is that the song "Betty" is James' attempt to apologize and reconcile with Betty, after committing infidelity.

Fans are further analyzing the love triangle as a personal one, which Swift may have been personally involved in. Since she's revealed that her parents named her after singer-songwriter James Taylor, Swifties are saying "James" is actually her. And fans also think "Betty" is actually Kloss, because her middle name is Elizabeth. Betty is a common nickname for Elizabeth, and fans have run with it:

The theory that Swift and Kloss had a past relationship isn't new, as fans have been theorizing this idea for a while. Since the best friends reportedly had a falling out in recent years, some fans have been explaining the rift as a secret relationship gone awry. The pair was very close at one time, and they seemed inseparable. Both of the stars have denied that they shared anything more than a friendship, but some diehard fans aren't so sure.

"Betty," written in a 17-year-old's perspective, features lyrics such as, “The worst thing that I ever did / Was what I did to you." The theme is a combination of loss and regret. In the chorus, Swift sings, “If I just showed up at your party / Would you have me? / Would you want me? / Would you tell me to go f*ck myself?” The song continues, "Or lead me to the garden? / In the garden, would you trust me / If I told you it was just a summer thing? / I'm only seventeen, I don't know anything / But I know I miss you."

Further fueling the speculation is the fact that Kloss posted a photo of herself hugging a tree in the forest — which looks very similar to Folklore's album cover — right after Swift revealed her woodsy imagery for Folklore. Kloss captioned the tweet, "happy place."

So many fans on Twitter see the connection and are sure their theory may be spot-on:

The Kaylor theory isn't the only one circulating about "Betty." Fans are also linking the song to Ryan Reynolds and Blake Lively's children since the names of their first two children (James and Inez) are shouted out in the song, and it's led to speculation their third child is named Betty. There's also a theory the song could be a tribute to her boyfriend Joe Alwyn's mother, since her name is Elizabeth. As with so many enigmatic Swift songs, fans may never know the true meaning of "Betty," but it's still fun to try to guess.