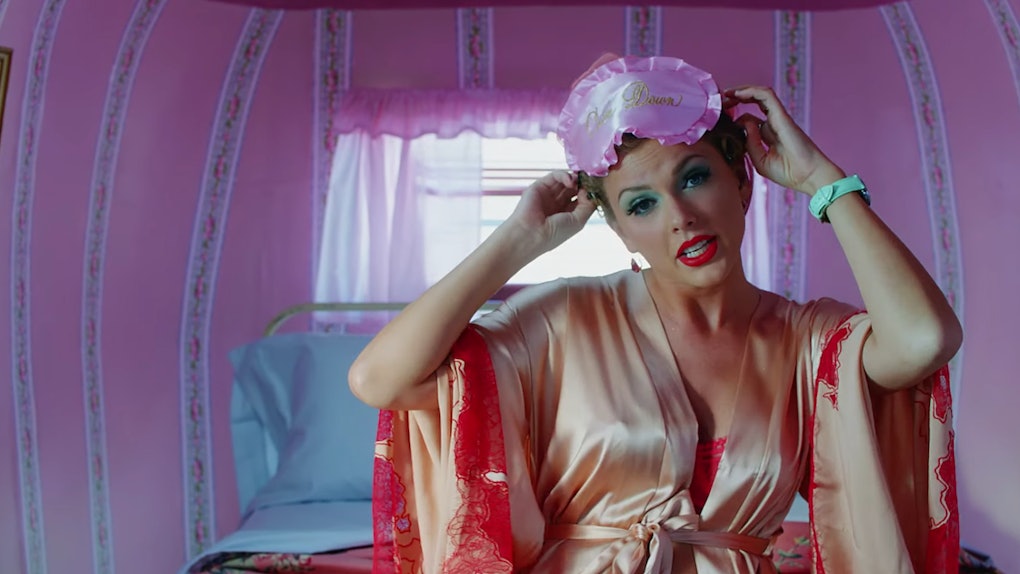 The Lover era has really begun. I repeat: the Lover era has really begun. It's sweet, beautiful, colorful and basically represents all-things positive in this world (just like Taylor Swift). It all started back in April when Taylor Swift released the self-love anthem "ME!," featuring Brendon Urie. The song's uplifting message was fans' first glimpse of what Swift's new album, Lover, could be like. Of course, back in April, fans had no idea about the album's title, but they had a few guesses and Lover was definitely one of them (thanks to the easter eggs T-Swift left in the "ME!" MV). Then on Friday, June 13, Swift revealed that Lover would release on August 23 and that the music video for "You Need To Calm Down" would premiere on June 17 on Good Morning America. Well, that day has finally come because Taylor Swift's "You Need To Calm Down" music video is here and it's perfect.

During Swift's June 13 Instagram Live, she explained why she decided to release the "You Need To Calm Down" music video a few days after the single dropped. Swift said that she wanted fans to appreciate the song's lyrics, as well as the video's visuals. She felt that the best way to do that was through having different release dates for each.

The video doesn't come out for another couple days because I wanted you to hear the song first and then see the video because the video, it is very worth the wait. There's a lot going on in the video and so I wanted that to be a separate discovery.

There goes Taylor Swift again, always thinking about her fans. When she said that there was "a lot going on in the video," fans instantly became excited because of how the "ME!" music video turned out, which also had a lot going on. I mean, it had Taylor Swift sitting on top of a unicorn statue, Brendon Urie coming out of the sky with an umbrella, and a whole bunch of neatly choreographed dance numbers. Oh, and it also had the names of both Swift's new album and her second single hidden somewhere in all the beautiful chaos.

Looking back at the video now, how did I not realize that the name of the second single was in it? It. Was. Right. There.

Oh, well. But I won't make the same mistake again.

After Taylor Swift premiered the "You Need To Calm Down" music video on Good Morning America on June 17, she shared the video on YouTube, which you can watch below.

It's overwhelming right? There is so much to break down! The Queer Eye cast, Ellen DeGeneres' cameo, Ryan Reynold's making an appearance and... yes, that was Katy Perry, aka, longtime frenemy dressed up in her Met Gala hamburger suit, making peace with Swift while she's dressed in a french fry costume.

The music video is a full-blown pride and equality party.

Let me tell you, I will be keeping this video on repeat so I can look for any clues that Swift possibly hid about Lover. In her June 13 Instagram live, Swift revealed that Lover has 18 tracks, so chances are, she probably sneaked a few hints of the album's tracklist in her new music video. As Swift said, there is a lot going on in the video, but that won't stop me! I will find all the easter eggs, no matter what.

OK, maybe I should take Swift's advice and calm down. Just a little.