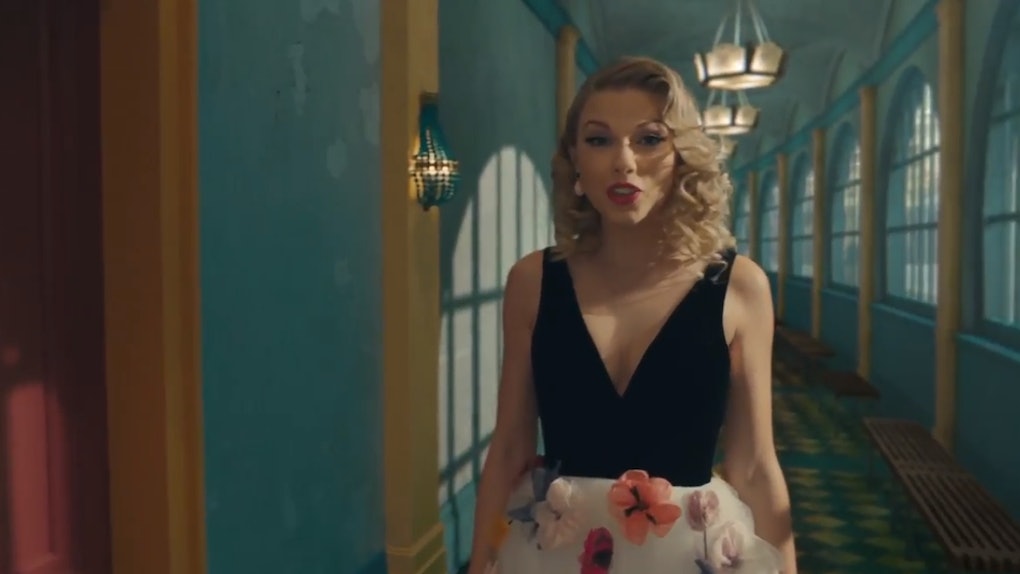 Taylor Swift & Brendon Urie's "ME!" Video Is About Her Evolution Into A Gorgeous Butterfly

It has been two long years since we've gotten any new music or new music videos from Taylor Swift. Two loooooong years. I was starting to think we'd never get another amazing, Easter Egg-filled cinematic creation packed with references — both obscure and not-so obscure — to the singer/songwriter's famous feuds and long list of ex-lovers. But on Friday, April 26, T. Swizzle finally blessed us all with a new single called "ME!" featuring Brendan Urie from Panic! At The Disco. And with the big tune drop came Taylor Swift's "ME!" music video. Halleluyah, Swifties. Hall-e-freaking-luyah, because this thing is all kinds of amazing!

The first hint we got that new music might be coming from TayTay, a whole two years after the release of Reputation, was when she posted a countdown clock on her website on April 13, followed by a string of mysterious pastel photos posted on her Instagram account every day afterward with the succinct caption "4.26."

Well, April 26 has arrived, Swifties! And Taylor's "ME!" is finally here! And not only is the song so, so good, but the music video is a legit masterpiece. And it's a good thing, too, since there was a ton of speculation on Twitter leading up to the reveal of this thing as fans tried to figure out what on earth it was going to be about based on Swift's cryptic social media posts.

Like I said, the pop star shared a ton of pastel pics on the 'gram on the days leading up to the big reveal.

There was a pink rhinestone heart:

A close-up of some hands blinged out with rings:

A zoomed-in pic of a mint green bicycle wheel:

A shot of pink sequined fabric:

And a wall of artwork featuring, of all things, a bunch of little chickens in sunglasses:

Interesting, right? I mean, I just love a good mystery, don't you? But what did it all mean?

Many fans were convinced that the images were stills from Swift's new music video, and they took to Twitter to air their theories as they tried to work the whole thing out.

Check out some of these tweets fans sent out after Swift shared a photo of pink flowers in a vase resting on a bar on April 24:

SAME. And now that video is finally here. And you know what, guys? It's EPIC!

Check it out in all its quirky glory:

The music video starts off with a snake turning into a butterfly, which then transitions to Swift and Urie yelling at each other in French. The colors in the video are super vivid and there are quite a lot of butterflies, cats, and hearts. You know, everything you saw on Swift's Instagram the past couple of weeks! The video actually seems like a very interesting take on older French cinema. Very Umbrellas of Cherbourg, if you ask me:

What do you think?