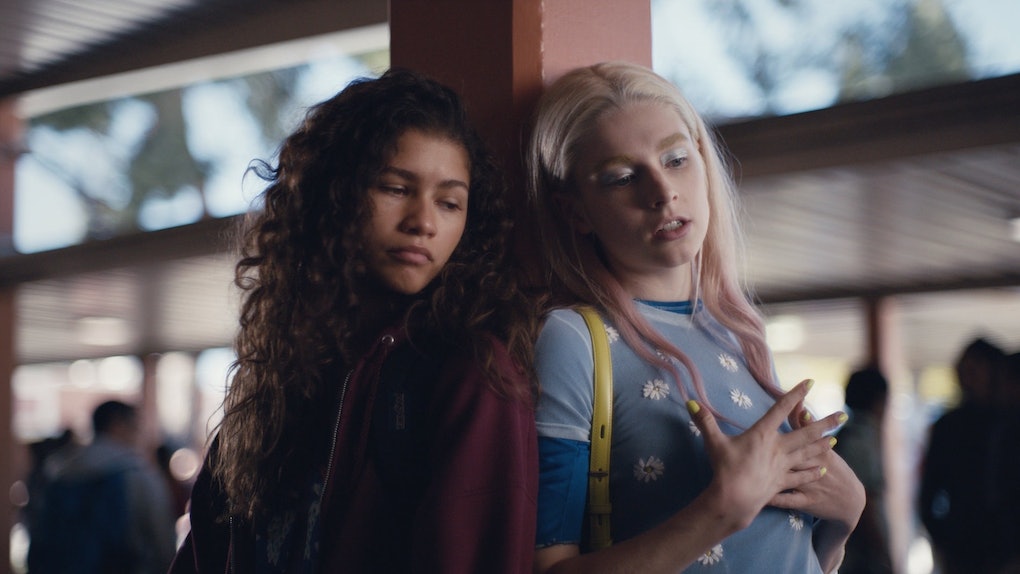 6 Trippy Teen Shows Like 'Euphoria' That Will Keep You Hooked

HBO's new hit show Euphoria holds nothing back when it comes to its explicit portrayal of the modern teenage experience. The new series, helmed by Zendaya and inspired by the groundbreaking Israeli series of the same name, has shocked audiences with its graphic depictions of drugs, sex, nudity, and addiction, but Euphoria is not the only teen series to shine a harsh light on usually unspoken truths. If you cannot get enough of the new show, check out these trippy teen shows like Euphoria that you will also get hooked on.

More than anything else, the show that Euphoria is most similar to is the seminal British teen series Skins. The show ran for seven seasons from 2007 to 2013, which were divided up into three different generations of students in high school. Like Euphoria, Skins was deemed groundbreaking in its representation of controversial and taboo topics, such as teen sexuality, drug use, and various forms of mental illness. The U.K. series is available to stream on Netflix, and it is the perfect thing to watch after you are all caught up on Euphoria and want something that has the same feel.

Drugs are at the center of Euphoria, as Zendaya's character Rue secretly feeds her addiction after a nearly lethal overdose, and the same can be said for FX's crime drama Snowfall. The 2017 series follows a 19-year-old drug dealer in Los Angeles in the '80s, who finds himself embroiled in the era's crack cocaine epidemic.

While the trippiness in Euphoria comes from its drug-induced scenes, the U.K. series Misfits imbues weirdness into its teen storyline through superpowers. The show centers on a group of young offenders who unexpectedly gain superpowers during an electrical storm, and struggle to cope with their strange new abilities. All five seasons of the show are available to stream on Hulu.

Showtime's family drama Shameless has been shocking audiences since its premiere back in 2011. Although it is only partially a teen series since half of the show is focused on adults, it has notably tackled intense storylines involving drugs, sex, and and violence. The show is available to stream on Netflix.

If Euphoria goes on to be considered an emblematic work for Generation Z, then it will come two decades after the quintessential high school series for the millennial generation: Freaks and Geeks. In the series that first introduced the world to future movie stars like James Franco, Seth Rogen, Linda Cardellini, and Busy Philipps, two groups of outcasts — the stoner "freaks" and the nerdy "geeks" — toil to make it through the minefield that is high school.

6. Degrassi: The Next Generation

The tone of Canada's long-running teen soap Degrassi may be decidedly more "after school special" than the daring Euphoria, but Degrassi is infamous for tackling controversial storylines and going to completely unexpected places with its plot. As a bonus bit of connection between the shows, Drake is an executive producer on Euphoria, and as fans know, he got his start by starring as Jimmy Brooks on Degrassi.

More like this
What Comes In The 'Euphoria' Book Box Set? Here's What To Expect
By Abby Monteil
This 'The Handmaid’s Tale' Season 4, Episode 5 Promo Shows June In Chicago
By Ani Bundel
20 Shows Like 'Shadow And Bone' To Watch When You Need A Fantasy Escape
By Abby Monteil
Stay up to date