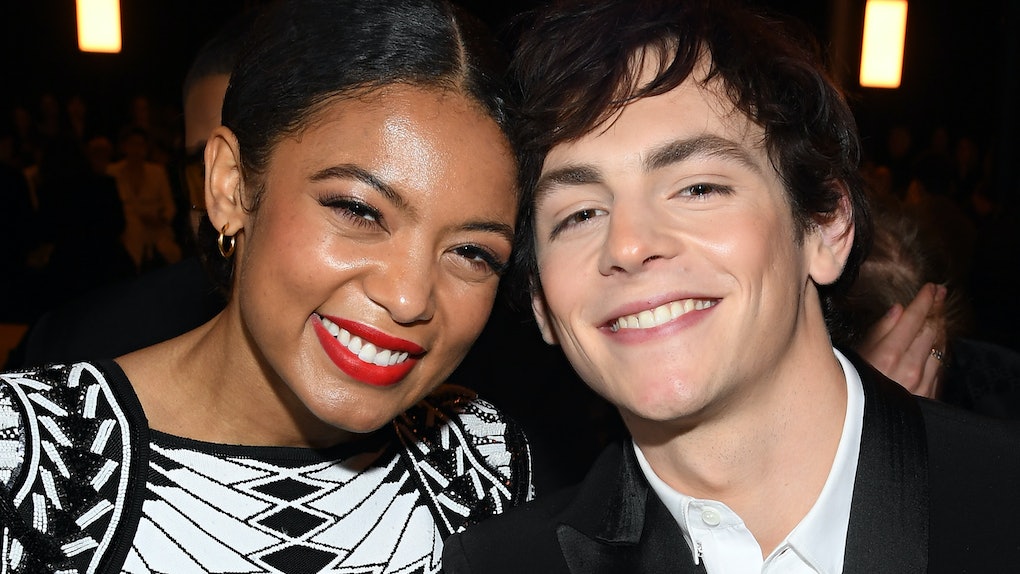 17 Celebrity Couples Who Met While Working Together On Set

If you've ever shipped an on-screen couple, then you probably know the feeling of satisfaction that comes with watching your fave characters date IRL. Whether sparks fly between two actors, an actor and a crew member, or an actor and their stunt double (yes, that's happened!), it's always fun to learn the story of what went down. Sometimes that connection is instantaneous. Sometimes it takes a while for a working relationship to turn romantic. Admittedly, celebrity couples who met while working together on set don't always stay together, but when they do, it's pretty adorable.

Whether they met while rehearsing for a movie, TV show, music video, or Broadway play, it's unsurprising that many of the performers who get together did so after playing love interests. It makes sense — even if you're acting, it takes some chemistry to make those on-screen kisses look convincing. Not all movie and TV couples fall in love, of course, and not all couples who got together on set played on-screen lovers. But after spending so much time with each other in rehearsals, it's understandable why professional relationships blossom into friendships... and sometimes, more-than-friendships. These celeb couples who connected on set truly have some of the best how-we-met stories.

Chilling Adventures of Sabrina co-stars Jaz Sinclair and Ross Lynch first hit it off in early 2018, which is when filming for the series began. The connection must have been fire, because the two wrote a song together during those early days of production. "I actually wrote a song with Jaz Sinclair way early on. Like, when we first booked the show," he told Cosmopolitan in April 2019 when asked about his recent musical endeavors. By December 2018, the two were rumored to be an item.

Sparks starting flying for Dove Cameron and Thomas Doherty on the set of Descendants 2 in 2016, and by February 2017, Cameron confirmed their relationship to People. When asked whether it was love at first sight, Cameron said, "It was not right away. It was one of those natural evolutions… but you know, again, I'm going to stay tight-lipped about that. But he's a lovely, lovely person."

Chrissy Teigen and John Legend first met on the set of Legend's music video for "Stereo" in 2006, and unsurprisingly, their first interaction was perfection. As Teigen explained to Cosmopolitan in April 2014, "I walked into John's dressing room to meet him, and he was ironing in his underwear. I said, 'You do your own ironing!?' He said, 'Of course I do.' I gave him a hug." After spending 14 hours together on set, the two of them got In-N-Out burgers, hooked up, and the rest is history.

Before starring alongside each other in Netflix's The Boys in the Band, Andrew Rannells and Tuc Watkins met while playing those same roles in the Broadway play of the same name. When rehearsals for the production began in winter 2018, Rannells knew right away something would likely happen between him and Watkins. As he told the Daily Beast, "I remember standing next to Tuc and not knowing him super well, but looking at him and thinking, 'Ah, f*ck. This is going to happen, isn't it? We're going to be those two actors who have a showmance.'" By summer 2019, they were IG official.

Green Lantern may not have been a commercial success, but it succeeded in introducing Ryan Reynolds and Blake Lively back in 2010. Both stars were taken at the time — as Lively was dating her Gossip Girl co-star, Penn Badgley, and Reynolds was married to Scarlett Johansson — but they eventually ended up together. As Reynolds recounted on Entertainment Weekly's SiriusXM show in February 2016, "I remember it was funny because for about a year after Green Lantern had come and gone and we were both single. We went on a double date. She was on a date with another guy and I was on a date with another girl. That was the most awkward date because we were just like fireworks coming across."

While I'm still shook Seth Cohen and Blair Waldorf ended up together, there's no denying Adam Brody and Leighton Meester's relationship is cute AF. The two crossed paths on the set of The Oranges in 2011, and apparently, they liked working together so much they went on to co-star in a second movie, Life Partners. According to Us Weekly, the couple reportedly transitioned from friends to more-than-friends in early 2013 and are still going strong.

Though Lauren Morelli first met Samira Wiley in 2012 on the set of Orange Is the New Black, the romance didn't blossom right away, as Morelli was already married to fellow director and producer Stephen Basilone. However, Wiley was still instantly smitten. "I tried to be around her as much as I could," Wiley told Martha Stewart Weddings in May 2017. The two became close friends, and Wiley became the person Morelli confided in as she struggled with her sexuality. As Wiley told Bust in March 2018, "There was something deeply intimate about that, whether there was sexual tension there or not." By 2014, Morelli was divorced, and she and Wiley were an item.

In June 2020, Outer Banks stars Chase Stokes and Madelyn Cline confirmed they weren't just a couple on-screen — they were also in a relationship IRL. According to Stokes, working together made their bond that much stronger. "We've got really great communication, and the cool part is we've started a friendship first, which is awesome to be friends before you dive into a relationship," he explained to Us Weekly in July 2020.

Rose Leslie and Kit Harington first connected as star-crossed lovers on the set of Game of Thrones, and as Harington told L'Uomo Vogue in May 2016, he knew he'd fallen for his co-star while they were filming the second season in Iceland in 2011. "If you're already attracted to someone, and then they play your love interest in the show, it becomes very easy to fall in love," he explained.

Gwen Stefani and Blake Shelton first became friends as coaches on The Voice in 2014, but back then, both were still married — Shelton to Miranda Lambert, and Stefani to Gavin Rossdale. However, the two filed for divorce in 2015 within a month of each other, and going through divorces at the same time brought them even closer. By the end of 2015, Stefani and Shelton were a confirmed couple. As Shelton told Billboard during a June 2016 interview, "Gwen saved my life. Who else on earth could understand going through a high-profile divorce from another musician? You can't even imagine the similarities in our divorces."

Kiersey Clemons and Ebony De La Haye met on the set of Sweetheart back in 2017, in which De La Haye played Clemon's stunt double. As De La Haye explained to Variety during a June 2020 interview, filming took place over eight weeks in Fiji, and what started off as a friendship between the two women eventually blossomed into attraction. "...we'd already vibed, and there's always that weird queer thing of, 'Does this girl want to be my best friend, or…?' If you misread that, it's embarrassing," De La Haye explained. "But it became obvious towards the end."

Ashton Kutcher and Mila Kunis were first introduced all the way back in 1998 while filming That '70s Show, but it took several years for the two to become a couple. Initially, their relationship was entirely platonic. As Kutcher told explained during a June 2017 appearance on The Howard Stern Show, "At first I think she thought that I was good-looking. Shortly thereafter, I was just annoying to her because I was like a big brother." But finally, in 2012, Kutcher and Kunis' relationship turned romantic.

After falling for (and breaking up with) her co-star from The Kissing Booth, Jacob Elordi, Joey King reportedly met Steven Piet on the set of The Act, per E! News. Piet was a co-executive producer for the Hulu series, and after months of dating rumors, King finally confirmed their romance by referring to Piet as her "sweet boyfriend" in an April 2020 essay for InStyle.

Stranger Things co-stars Natalia Dyer and Charlie Heaton hit it off when the series began filming in late 2015. Since then, the couple has kept their relationship super private, but Dyer did open up about the benefits of dating a co-star during a July 2019 interview with Refinery29. "It's an interesting thing to work with somebody who you go home with. It's always really fun," she said. "We're really comfortable with each other, so we can play and feel more free, and we can talk about it before."

Jada Pinkett Smith first met Will Smith when she auditioned to play his love interest on The Fresh Prince of Bel-Air in 1994. She didn't get the part — but she did get Smith's attention. As Pinkett Smith explained during a May 2020 interview with YourTango, "I met him when I was 19 at an audition for The Fresh Prince of Bel-Air. After we had known each other for many years, we went out for dinner one night and I saw that he had grown from this lanky kid to this really responsible man. We started courting each other and our friendship turned into romance."

Machine Gun Kelly and Megan Fox clicked while filming their forthcoming movie, Midnight in the Switchgrass, and apparently, Fox had a feeling she would hit it off with Kelly before production even began. "I was like, 'Who is going to play this role?' And he was like, 'Oh, we just got Machine Gun Kelly,' and immediately, I was like, 'Uh oh,'" Fox recalled during a July 2020 appearance on the podcast Give Them Lala ... With Randall. "...I could feel that some wild sh*t was going to happen to me from that meeting, but I wasn't yet sure what." And she was right. As Fox explained, "I knew right away that he was what I call a twin flame."

Lucy Boynton met Rami Malek for the first time in 2017 on the set of Bohemian Rhapsody, and apparently, she was impressed by his professionalism. "Rami felt so much the leader of that set," she told The Cut in August 2019. "The cast became so close going through that, as you always do when going through a particularly stressful experience, to put it politely." By April 2018, a source for Us Weekly reportedly claimed the two were official.

IMO, these meet-cutes deserve all the awards.