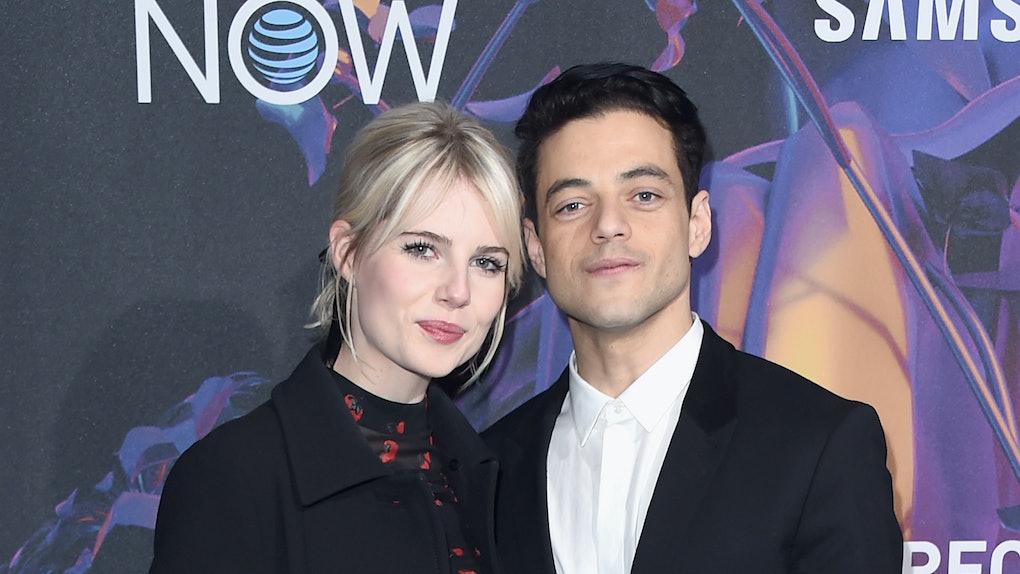 Is Rami Malek Single? He Found Love On The Set Of 'Bohemian Rhapsody'

Bohemian Rhapsody has introduced a whole new audience to Freddie Mercury and Queen. But the movie has done something else, too: It’s helped put Rami Malek on the map as far as theater audiences go. Now, you don’t hear too much about what Malek is like behind the scenes. But with all the Golden Globes buzz surrounding Bohemian Rhapsody, people are definitely curious about what’s going on in Malek’s life when the cameras aren’t rolling. So, is Rami Malek single? As it turns out, he’s not!

Malek is actually dating his Bohemian Rhapsody co-star Lucy Boynton. The two met while filming in London in 2017 and have basically been inseparable ever since. Malek plays Freddie Mercury in the film, while Boynton is tasked with playing Mercury’s muse and partner, Mary Austin.

News of the Malek and Boynton’s romance first broke in April 2018. At the time, an insider source for Us Weekly revealed how the two met and how much they enjoy each other’s company.

“They met while filming Bohemian Rhapsody in London,” the source told Us Weekly. “He is so into her. He goes and visits her in London all the time.”

The relationship seems to still be going strong as the couple was recently spotted on Rodeo Drive. The Daily Mail published photos of Malek and Boynton walking down Rodeo Drive and looking totally in love.

Making Bohemian Rhapsody proved to be a really fruitful effort for Malek and Boynton since they’ve become such important parts of each other’s lives. For Malek, specifically, making the film has had a huge impact on his career.

In an October 2018 interview with The Guardian, Malek revealed that landing the part of Freddie Mercury was a huge moment for him.

“Kind of the gun-to-the-head moment,” he said. “What do you do? And I like to think if it’s a fight or flight situation, I’m going to fight. The scariest [endeavors] that I’ve chosen to take in my life have been the most fulfilling and rewarding. And this has proven to defend that equation.”

And in a September 2017 interview with Entertainment Weekly, Malek talked about how seeing himself made up to look like Mercury impacted his performance.

“When you’re able to open your eyes and see a different person staring back at you in the mirror, it’s a very affirming moment,” Malek said. For Malek looking like Mercury “only adds to the level of confidence that one would need to play Freddie Mercury.”

All that hard work proved to be a good thing because Malek was nominated for a Golden Globe for his performance in the film.

Boynton has also opened up about how much pride she takes in the film. In an interview with Digital Spy, Boynton revealed that certain criticisms of the film have gotten under her skin because she has such faith in its ability to truly tell Mercury’s story.

"It's when people want to have something to [criticize] that is kind of jarring, especially because it does and the one thing that we're so proud of with this film is that I don't feel it ever steps over the line into any kind of expose or intrusiveness," she said.

So, both Malek and Boynton are extremely proud of their work, it seems. When you consider the praise Malek is getting and the fact that he and Boynton have found love on set, it certainly sound like Bohemian Rhapsody was meant to be!