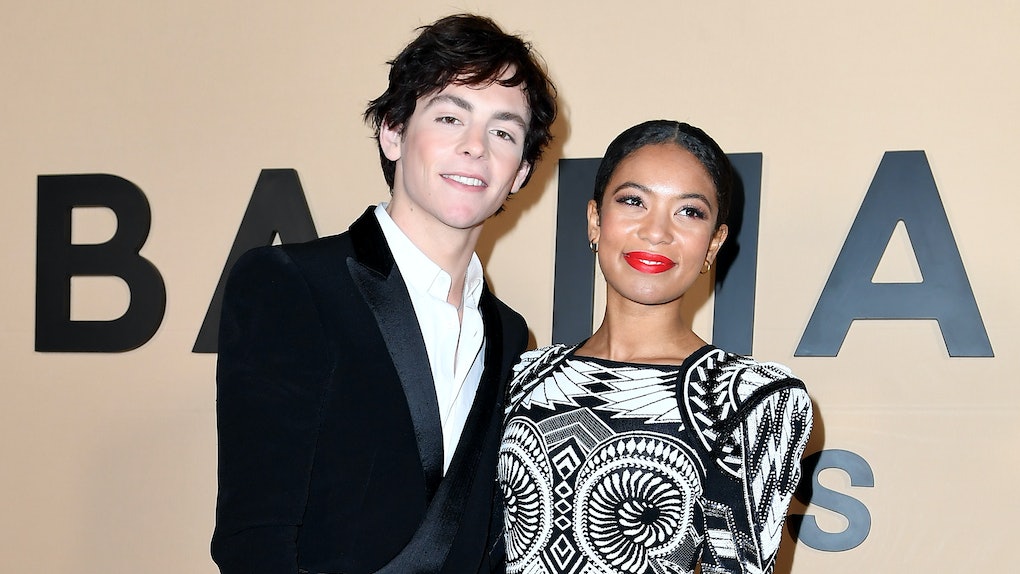 While I totally respect Chilling Adventure of Sabrina's Harvey and Sabrina shippers, I must say I'm team Harvey and Roz all the way. Yes, Roz is Sabrina's BFF. Yes, Harvey is Sabrina's ex-BF. But when two actors who play onscreen love interests date IRL, I have no choice but to stan. As much as I adore them, Ross Lynch and Jaz Sinclair's relationship timeline is admittedly confusing, mostly because the actors have yet to actually confirm their relationship. (Elite Daily reached out to reps for Lynch and Sinclair about the rumored relationship but didn't hear back in time for publication.)

They've posted loved-up pics on IG. Sinclair has called Lynch her "honey," her "mans," her "best friend," and even "shugga." Lynch once alluded to their "relationship." But are they actually an item? I need answers!

Ever since the two connected on the set of CAOS, they've seemingly been inseparable — going on vacations together, meeting each other's families, and generally looking cute AF. While I wait for Netflix to reconsider the cancellation of CAOS, I'll keep myself busy by trying to find out more info about Lynch and Sinclair's sweet off-set relationship (which I am totally convinced is the real deal).

They Reportedly Met In May 2018

According to the Vancouver Sun, production for Chilling Adventures of Sabrina started in March 2018, which is when Lynch and Sinclair seemingly first met. The connection must have been instantaneous, because the pair wrote a song together during those early days of production. "I actually wrote a song with Jaz Sinclair way early on. Like, when we first booked the show," he told Cosmopolitan in April 2019 when asked about his recent musical endeavors. "We were up in Vancouver and I have a portable studio that I bring with me. And we just wrote a quick song."

They Sparked Dating Rumors In December 2018

After getting to know each other on set, Lynch and Sinclair starting appearing on each other's IG grids, like that time when Sinclair celebrated her birthday with Lynch and his brother, Rocky. Things escalated in December 2018 for Lynch's birthday, when Sinclair shared a (since-deleted) birthday message for Lynch on Instagram with a series of cute photos, along with the caption, "Happy Birthday to my favorite. I'm really happy you were born. Here's to many more good chats, belly laughs and dances in the new year."

Lynch also posted a pic on his own grid showing him in his underwear, which he captioned, "It's my burthdaayyyyy. This photo was taken after @gavinleatherwood and @jaz_sinclair stormed into my room with coffee blaring 'it's a beautiful morning' by The Wipe Outs. It was great way to wake up." Oh?

They Kissed... Then Denied Dating Rumors In January 2019

Fans became pretty convinced the two were more than friends after Lynch's sister, Rydel, shared a Snapchat of Lynch and Sinclair kissing on New Year's Eve in 2018. However, when asked about their relationship by Entertainment Tonight just a few weeks later, Lynch insisted Sinclair was just his "closest friend."

Later that month, Sinclair accompanied Lynch to his ex-girlfriend Courtney Eaton's birthday party (and the co-stars looked very cozy in a picture shared by Eaton on IG).

They Reportedly Showed PDA In April 2019

Despite denying dating rumors, Lynch was reportedly spotted kissing his co-star at The Roxy Hotel in New York City in April 2019 following a CAOS Q&A. "They were sitting on a couch together. His arms were around her waist," a source for Us Weekly reportedly claimed. "They were looking into each other's eyes… noses touching and giggling." Soon after, the two started "kissing on the couch together," according to the source.

In December 2019, Sinclair got sappy once again on the 'Gram, posting a cute GIF from CAOS of her character, Roz, dancing with Lynch's character, Harvey. "I love the way the room disappears when we're together. There's more to say, so I'll write you a letter. Happy Birthday to my favorite dance partner," she captioned the post. She also included a honey pot emoji because, you know, Lynch is apparently her honey.

They Made Their Red Carpet Debut In January 2020

The maybe-couple traveled to Paris together in January 2020, where they made their red carpet debut at the Balmain fashion show in Paris. They also posted an adorable TikTok of their getting-ready process beforehand, where they teased followers with an almost-kiss. Oh, and they also got caricatures of themselves painted by street artists, which Lynch shared on IG.

In March 2020, right before the coronavirus pandemic broke out in the United States, Sinclair posted pics from a trip to Zion National Park in Utah, which seemed to include just her and Lynch (as well as Sinclair's dog, Zora). "Adventure buddy Tingz," she captioned the series of photos.

Amid the protests against police brutality and racism in April 2020, Lynch took to IG to defend his "relationship" with Sinclair after facing racist comments from haters. "Yo guys whoever is being hateful to jasmine and I's relationship (especially on a race basis wtf) can take a step back. We are both extremely happy. Thanks," he captioned a series of couple's pics.

A month later, Sinclair shared pics of her and Lynch holding hands and participating in a Black Lives Matter protest, along with the caption, "Standing with those who stand for me."

In July 2020, soon after sharing a vid of Lynch putting her hair into a ponytail, Sinclair posted a series of pics that showed her giving Lynch a kiss on the cheek. "Also this.. I'm grateful for this," she wrote alongside the photos. My heart!

They Took A Trip Together In September 2020

The two went on another trip with (seemingly) just each other and Zora the dog in September 2020, though it's unclear exactly where they went, as Lynch simply tagged the location in his pics as "California." Both posted shots from the getaway on their grids, with Lynch's pics captioned, "Will never say no to swimming in a water fall," and Sinclair's captioned, "I'm a big ol' sap 🤷🏾‍♀️Also a sucker for adventure." Zora (or, rather, Zora's dog mom Sinclair) also posted a pic on her doggie IG of her being held by both Lynch and Sinclair.

Whether it's official or not, these two clearly can't get enough of each other, and I love to see it.