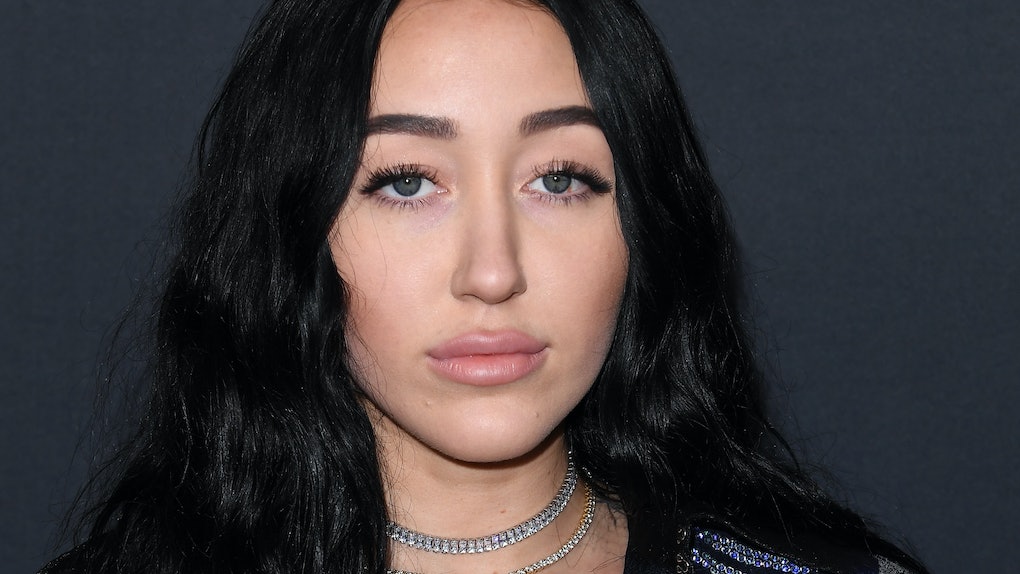 Who Has Noah Cyrus Dated? Her Relationship History Is So Dramatic

Though it seems like Miley Cyrus' younger sis is a single lady at the moment, nothing is really certain when it comes to Noah Cyrus' relationship history. From her on-and-off-again romance with Diego Leanos (better known as Lil Xan) to her confusing connection with Tana Mongeau, the singer loves to keep fans guessing about her love life. She even recently sparked dating rumors with her good friend Demi Lovato, though a source close to Lovato later told Elite Daily the two "are not dating" and "they're just friends." But with Cyrus, the line between "friendship" and "relationship" is rarely clear.

What is clear is that Cyrus loves exploring past relationships through her music. Her debut studio album, NC-17, which was released in 2017, was even inspired by a tough breakup, though Cyrus never revealed the identity of the ex. "The inspiration behind 'Make Me' was sort of about a toxic love and a toxic relationship and you're so in love with your significant other that you would do anything to stay with them," Cyrus told Grazia in May 2017 when asked about her single "Make Me (Cry)." And since then, all of Cyrus' maybe-relationships have seemed equally intense.

Here are the lucky folks who have reportedly romanced Cyrus over the years.

Cyrus' first relationship in the public eye was with fellow singer Tanner Drayton (also known as Tanner Alexander). Though it's unclear how they met or when exactly they started dating, the couple attended the VMAs together in August 2017, and just about a year later in June 2018, Drayton and Cyrus got matching star tattoos courtesy of JonBoy. "Oh Lord they've been on fire lately," JonBoy captioned a photo of the two on Instagram, referencing to the single they released together, "Lately." However, by July 2018, Cyrus was reportedly dating someone new, and she has since deleted all pics of herself and Drayton from her grid.

In late July 2018, Cyrus posted some loved-up videos with rapper Lil Xan to her IG Stories, sparking dating rumors. "It is still very new and only became official within the last week," a source reportedly claimed to Us Weekly at the time. "Noah has told her close friends about him and seems excited." A few weeks later, Cyrus revealed how Xan slid into her DMs before they started dating, and in August, they made their red carpet debut at the 2018 VMAs. All seemed to be going well for the couple (who even dropped a song together called "Live or Die") up until September, which is when things got messy.

Apparently, Cyrus and Xan split over a naked Charlie Puth meme that Cyrus sent to Xan, which Xan seemingly misinterpreted. The meme led Xan to make cheating accusations on his IG Story, and in response, Cyrus clapped back and accused Xan of cheating on her. The exes eventually moved on, but the drama revved up again in February 2019, when Xan announced he was engaged to his girlfriend Annie Smith... and they were expecting. And to make things even more dramatic, Smith announced she had a miscarriage two months later, though some fans accused her of faking the pregnancy to begin with.

A year later in April 2020, Cyrus and Xan sparked reconciliation rumors after they were reportedly spotted hanging out in Los Angeles, but little else was heard about the exes after that.

Before (maybe) getting back together with Xan, Cyrus seemingly had a short-lived fling with her friend Sebastian Baldeon (better known as DJ Diablo), who also happens to be good friends with Xan. In October 2019, Diablo shared a snap of him and Cyrus kissing on Instagram, leading fans to believe the two were an item, but the rumors fizzled out soon after.

To call Cyrus' relationship with Tana Mongeau complicated would be an understatement. Cyrus first reached out to the YouTuber via Twitter in May 2019 in response to a video the YouTube star posted entitled "the time Lil Xan cheated on me + why Noah Cyrus HATES me: STORYTIME." Cyrus tweeted at Mongeau to clear the air, and the two became friends... though some think that friendship eventually turned romantic. During a September 2019 interview with Entertainment Tonight, Mongeau's then-sort-of-husband Jake Paul even claimed "Noah and Tana are, like, wanting to hook up," which he was apparently cool with.

In December 2019, dating rumors ramped up after Mongeau posted a video entitled "I took my girlfriend’s phone and flirted with my best friend. prank????," during which she referred to Cyrus as her boo. She later changed the title of the vid from "my girlfriend's phone" to "Noah's phone," but fans were still convinced the two were an item.

Though Mongeau later told Entertainment Tonight she and Cyrus weren't actually dating during a December 2019 interview, she and Cyrus sparked dating rumors yet again in September 2020 when Mongeau called Cyrus her "girlfriend" in an Instagram post. I don't think fans will ever really know what the deal was with these two.

In January 2020, Cyrus and Machine Gun Kelly briefly sparked romance rumors after they were reportedly spotted holding hands at a Grammys after-party, per E! News. "They are holding hands and posing for photos together," a source reportedly claimed. "They walked around party hand in hand. They held hands as they arrived back inside the party and continued to be next to each other the entire time. It seemed like they were dating." Just a few weeks earlier, Kelly also posted a sweet IG tribute to Cyrus on her birthday with a pic of them hugging. However, neither Kelly nor Cyrus ever confirmed dating rumors.

Cyrus' latest rumored romance was with rapper Smokepurpp (born Omar Pineiro), with whom she seemingly went public in July 2020. After posting lots of loved-up IG Stories with each other, Cyrus and Smokepurpp were reportedly spotted holding hands in Los Angeles, but the maybe-relationship was short-lived. In September 2020, Cyrus posted a (since-deleted) video of herself crying and singing on IG, which she captioned, "i should be smiling cause i know that we really weren't good together," leading fans to believe she and Smokepurpp were done.

Cyrus' relationship history may be exhausting, but at least fans have gotten some incredible bops from it.