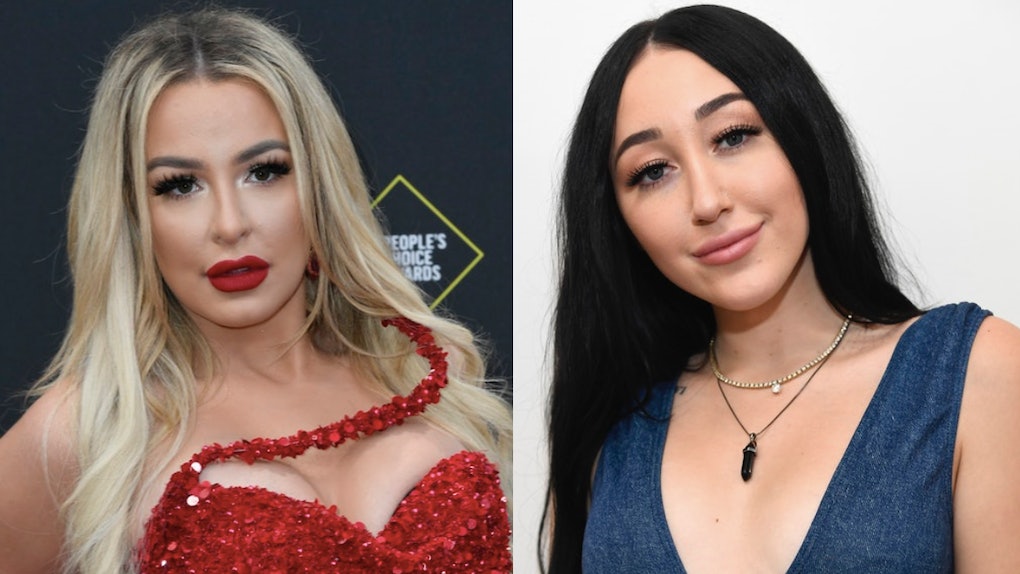 Are Tana Mongeau & Noah Cyrus Dating? This Video Is Convincing

If you were already confused about whether or not YouTubers Tana Mongeau and Jake Paul are actually married, you're going to want to take notes, because things just got even more confusing. On Dec. 3, Tana uploaded a video entitled, "I took my girlfriend’s phone and flirted with my best friend. prank????," which probably has you wondering, "Who is Tana's best friend?" and even more importantly, "Tana has a girlfriend?!" Luckily, Tana answered both those questions within the first 30 seconds of the video: Her bestie is vlogger Imari Stuart and apparently, Tana Mongeau and Noah Cyrus are dating, because she referred to Noah as her "boo."

This maybe-couple (which some shippers have already dubbed "Nana") is intensely complicated for three reasons. One, both Tana and Noah formerly dated rapper Lil Xan, and Tana once thought Noah disliked her because they shared an ex. Two, Tana is a major Miley Cyrus fan and has been hitting on Noah's older sister on both Twitter and Instagram since before Miley's split from Liam Hemsworth. Three, Tana supposedly is still married to Jake, whom she tied the knot with in Vegas back in July, though they say the relationship is open. So the idea that Tana and Noah are now a couple is pretty wild.

Miley's younger sis first made contact with Tana via Twitter in May 2019, in response to a video the YouTube star posted entitled "the time Lil Xan cheated on me + why Noah Cyrus HATES me: STORYTIME." In the 46-minute (yes, you read that right) video, Tana recaps an awkward interaction between Tana, Noah, and Lil Xan at the 2018 VMAs. "I hear from a bunch of other people that [Noah] just, like, hates me," Tana told her fans in the video. "It hurt. It still hurts."

Noah took to Twitter soon after to clear the air. "lol this is hilarious," she tweeted. "i deff dont hate you and for sure turned the opposite direction of you no shoulder check. lets hangout and talk about how b*tchy girls are to other girls @tanamongeau dm me." Tana responded, "Omg. wow. love u. love this. wow. girls sticking together," and apparently, it was the beginning of a beautiful friendship.

Their friendship was again confirmed after Jake posted a pic in September of him surrounded by women with the caption, "Married." In retribution, Tana responded with an edited version of the picture, superimposing her face over all the other women. Noah approved of the edit, commenting, "bxkkxksowp," which I assume translates to, "You go, girl," and Tana replied, "On my way to [your] house." By October, the two were hitting up Knott's Berry Farm together for Halloween fun, and they even seemingly got Jake's approval.

During a September interview with ET Live, Jake opened up about his "open relationship" with Tana. "...since the start of our relationship it's been, like, an open type of thing because that’s just how we both are," he explained. Later he added, "And then Noah and Tana are, like, wanting to hook up and I think Noah's the one pushing that narrative, which I think is dope, again. Especially if I could be there." Welp, if Jake gets his way, it seems like things can only get more complicated from here. But TBH, I've got to admit that "Nana" is pretty shippable.