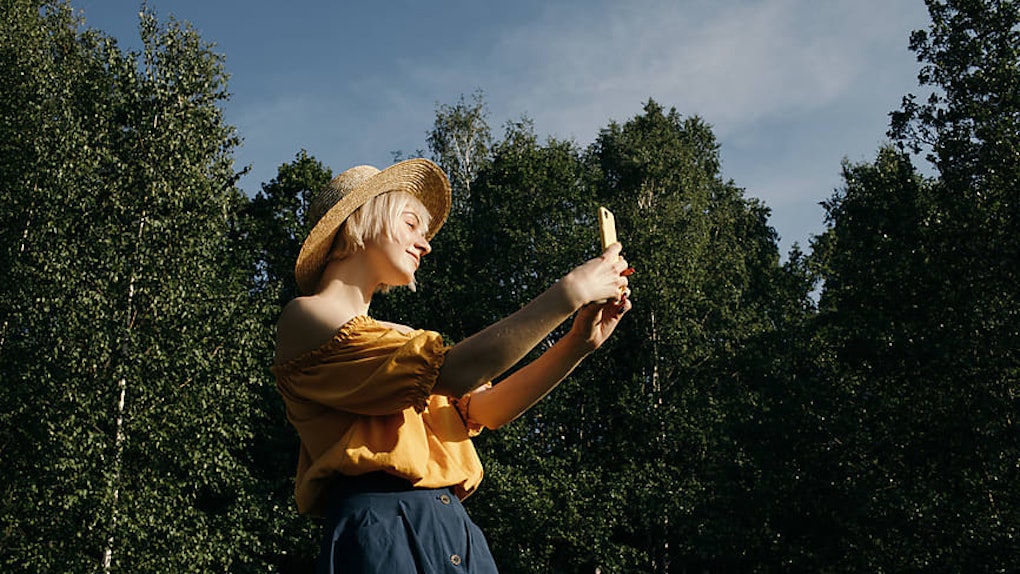 This modern world of dating has gotten so complicated, that it can be hard to know the best time to make a move. Whether you've been eyeing a certain cutie in the office for months, or have been following someone on social media for a while and want to meet in person, sending a direct message via Insta is actually a super smart play. So, if you're ready to take the next step, there are definitely some messages to send when you’re sliding into someone’s DMs that will definitely help you get a response.

Sending someone a DM on Instagram doesn't have to be shady. In fact, it can start new friendships, launch relationships, and help you get to know someone even more. It can make it easier to start talking over text, and then maybe even go out on a date together. So don't knock it until you try it — and definitely try it.

Think of it like this: you've been following this certain hottie since college because you had a group project together. You haven't talked since, but both moved to the same city after graduating. Curious about the possibility of dating? Send a DM! It's an easy way to test the waters and if you send one of these messages, you're sure to heat things up:

1. Respond to one of their stories.

One of the best ways to slide into someone's DMs is to reply to one of their Instagram stories. Seriously, it's a brilliant move. This way, you aren't just reaching out out of the blue, and you can respond to something they posted — say, a photo of food — and start an entire conversation. If they shared a picture of a delicious meal they're enjoying, simply say, "OMG looks amazing, so jealous!" and the rest will come naturally.

2. Ask them about a recent trip they took.

If you missed your chance to respond to a story, or you just want to try a different approach, ask them about a fairly recent post. If they went to a concert, ask them how it was. If they just got back from a trip to Europe, ask for travel recs! It's another easy way to start a conversation, learn something new, and not look too thirsty all at the same time.

3. Send a funny post you found that reminded you of them.

Another great way to flirt via DM is to send someone a funny meme you've found on another page. In fact, you don't even have to say anything yourself at first, you can just send the meme! Then, you make them laugh and open the floor for even more conversation.

4. Bring up a mutual friend.

If you and your crush have a friend or two in common, you could send them a DM asking if they've seen said friend recently. Ask if they want to get together with said friend so there's less pressure. Having a mutual friend is a great excuse to chat with someone, so don't pass it up!

5. Invite them out with friends.

If you're feeling a little bold, there's no harm in messaging someone on Insta DM to come hang out with a group. The fact that it's over DM only serves to make the invitation more casual, so there's no pressure. And when you make it a group hang, you also reduce the risk of coming on too strong. Basically, it's a win-win.

If you only recently moved to a new city where this person lives, slid into their DMs and ask for tips! Find out where the best restaurants, bars, parks, even farmer's markets are. Then, you could even ask them to join you at one of those places! It's simple, let's them know you're local, and could very well end with the cutest farmer's market date ever.

If you prefer to keep it short and sweet, just message them something like, "OMG love that hat in your last post!" It lets them know you're paying attention, but it's too direct, either. It's flirty without being too flirty. Again, it's a win-win.

Finally, you can just ask if they want to grab coffee or a drink after work! Sure, it might be a little bold, and you might get rejected, but you'll never know if you don't try.

Messaging someone over Insta DM is actually a great way to get the ball rolling. So don't be afraid to slid in there, and don't be shy about it either! Just go for it, because the worst that can happen is they don't respond.