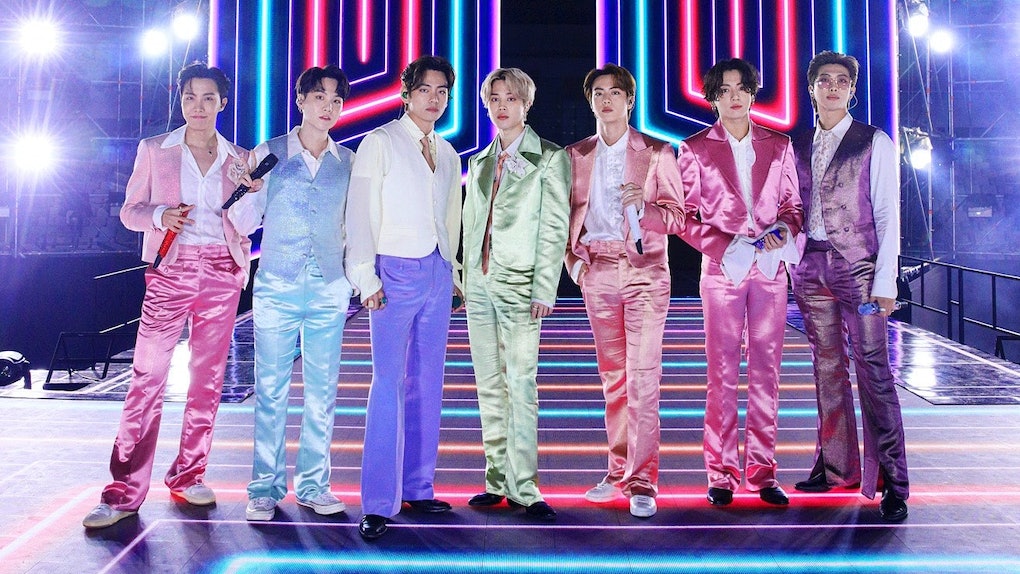 BTS never goes too long without giving fans new music. Weeks after dropping BE (Essential Edition) on Friday, Feb. 19, the group announced they're gearing up to drop another Japanese album. The release will feature Japanese versions of songs fans already know and love, as well as a brand-new single. Just like its title implies, fans have a feeling BTS' The Best Japanese album will be ~the best~ because one look at the details reveals the record will be jam-packed with their greatest hits.

BTS announced the release through their official Japanese fan club on Thursday, March 25 — just one day after appearing on the Korean variety show You Quiz On The Block and breaking the record for its highest-rated episode ever.

Considering ARMYs are always helped the group outdo themselves, The Best is likely to make history as well. The project will be the follow-up to BTS' previous Japanese album, Map of the Soul: The Journey, which they dropped in July 2020. It went No. 1 on the U.S. iTunes Top Albums chart, making it the first Japanese album by a Korean act to debut at the top.

ARMYs can rejoice because The Best will include songs from MotS: The Journey, as well as BTS' 2018 Japanese album Face Yourself. The most exciting detail of all, however, is the record will have a new song called "Film Out," which will serve as the ending theme in the upcoming Japanese movie SIGNAL The Movie Cold Case Investigation Unit.

To make sure you don't miss a single thing about this comeback, here are all of the BTS, The Best album details you need to know.

Fans will have to wait a few months before they can hold BTS, The Best in their hands because it will arrive at the end of spring on Wednesday, June 16.

Before then, fans can look forward to the release of the album's lead single. Since SIGNAL will be out in Japanese theaters on Friday, April 2, BTS will drop "Film Out" and its music video on the same day.

How to Pre-Order BTS, The Best

Fans in Japan can pre-order BTS' new album through their Japan Official Shop, Universal Music Store, and Seven Net starting on Friday, March 26. There hasn't been any information about where ARMYs can purchase the record outside of Japan, but it's likely the group will update everyone on Weverse when the release date gets closer.

On March 25, BTS shared a music video teaser for "Film Out," during which fans heard a sneak peek of the single's melody. The clip showed Jungkook standing alone in the middle of an empty room room with furniture covered in white sheets.

Another shot showed the septet standing together drenched in a blue hue as they looked out in front of them. The video ended with Jin running toward the screen, hinting something big was about to happen.

The Best will compile all of BTS' greatest Japanese hits on one double-sided album. Disc one will have songs like "Blood, Sweat, Tears," "FAKE LOVE," "Black Swan," and "MIC Drop," while disc two will have "Boy With Luv," "Spring Day," "ON," and "Not Today."

Check out the full tracklist below.

What does the BTS, The Best Physical Album Include?

You can't have a BTS album without some amazing goodies to go along with it. Fans will get different physical album goodies depending on which edition they purchase.

The regular edition will come with the two CDs, a 36-page lyric booklet, and two clear photocards based on BTS, The Best and "Blood, Sweat, Tears" unreleased designs, while the Japan Official Fanclub limited edition album will include two CDs, a 128-page lyric booklet, two stickers, two clear photocards based on unreleased BTS, The Best, "MIC Drop," "DNA," and "Crystal Snow" designs, and access to an interview special.

Alternatively, the Seven Net version will come with a 36-page lyric booklet, plus two clear photocards based on unreleased "Lights," "Boy With Luv," and Map of the Soul: The Journey designs.

The Blu Ray and DVDs will feature BTS' Japanese music videos for "Film Out," "Lights," "Blood, Sweat, Tears," "Airplane Pt. 2," "MIC Drop," and "Stay Gold," as well as behind-the-scenes videos for each of them.

ARMYs can't wait for BTS to make their Japanese comeback!

This article was originally published on March 25, 2021