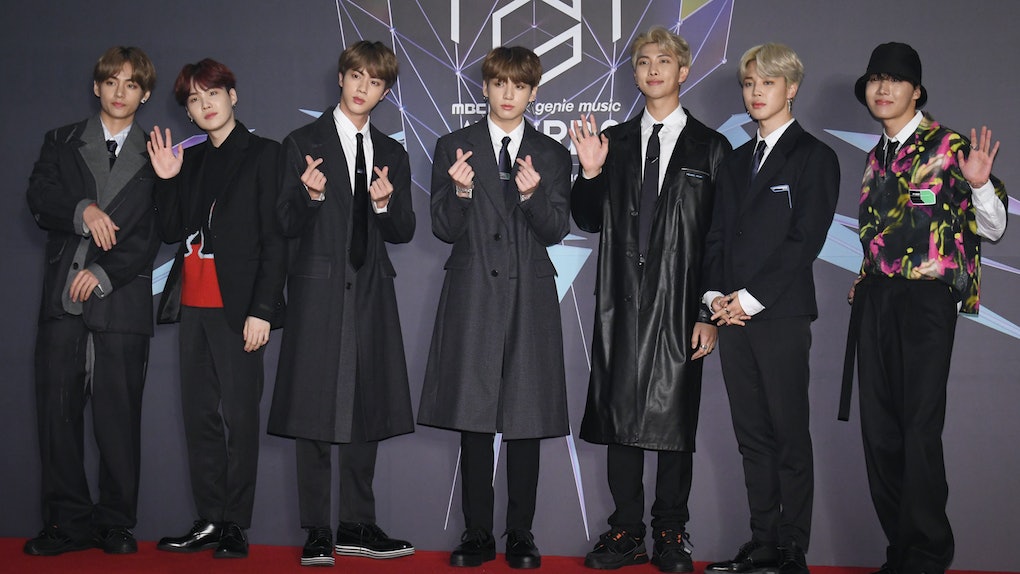 BTS' "Film Out" music video is their latest release to take over the Twitterverse. Fans are praising its stunning visuals and surprising connections to the group's previous MVs. Judging from the sneak peek BTS shared on March 25, fans knew the full clip was going to have a dramatic storyline. These tweets about BTS' "Film Out" music video show ARMYs are in love with every detail, and they're wondering what it all means.

Although the preview BTS dropped was only about 30-seconds long, fans could tell "Film Out" are "Fake Love" were going to be connected. There were so many parallels between the two videos that made fans believe they took place in alternate universes. For example, the shot of Jin running in "Film Out" looked very similar to the scene of Jungkook running in "Fake Love." Both videos also had J-Hope crouched in front of a door, as well as the septet standing still huddled together while looking directly at the camera. The reason fans thought the visuals would take place in alternate universes rather than the same world is because the video description underneath the "Film Out" teaser didn't say it was part of BTS' fictional Bangtan Universe.

Now that the full video has officially arrived, fans are convinced the two clips are connected. First of all, around the 2:50 mark in "Film Out," Jin opens a door and enters a world that's filled with countless other doors, which adds to the theory the visual takes place in an alternate universe. It implies the video is connected to BTS' other visuals, particularly "Fake Love," because that visual also has a mysterious door. Then, there's the scene with Jin being in a room that gets destroyed. The same thing happens in "Fake Love," so it definitely raises a lot of questions about the videos' connection.

After watching the "Film Out" music video, fans began asking others for theories on how it's connected to the BU.

Here's what one fan said: Since BTS' BU deals with time travelling and Jin always seems to be trying to save the other guys in every MV, it's possible the doors could represent alternate universes he created whenever he changed something in the past.

Another fan noticed BTS' MVs always seem to focus on Jin and Jungkook, so because in "Film Out," Jin is separated from the other members, he might be living in an illusion while Jungkook is living in reality, meaning he'll be the one to save BTS.

There were also some fans who believe the BU is connected to TXT's music videos because "Film Out" has similar scenes to those in "Eternally."

BTS' music videos never fail to get ARMYs thinking, and that's what makes them so amazing.

More like this
These Tweets Comparing SuperM's "We Do" To BTS' "Dynamite" Video Are So Split
By Michele Mendez
These Tweets About Taylor Swift's "Mr. Perfectly Fine" All Ask 1 Important Question
By Sydney N. Sweeney
These Theories About Meghan & Harry's 2nd Baby's Name Are Positively Royal
By Michele Mendez
Stay up to date