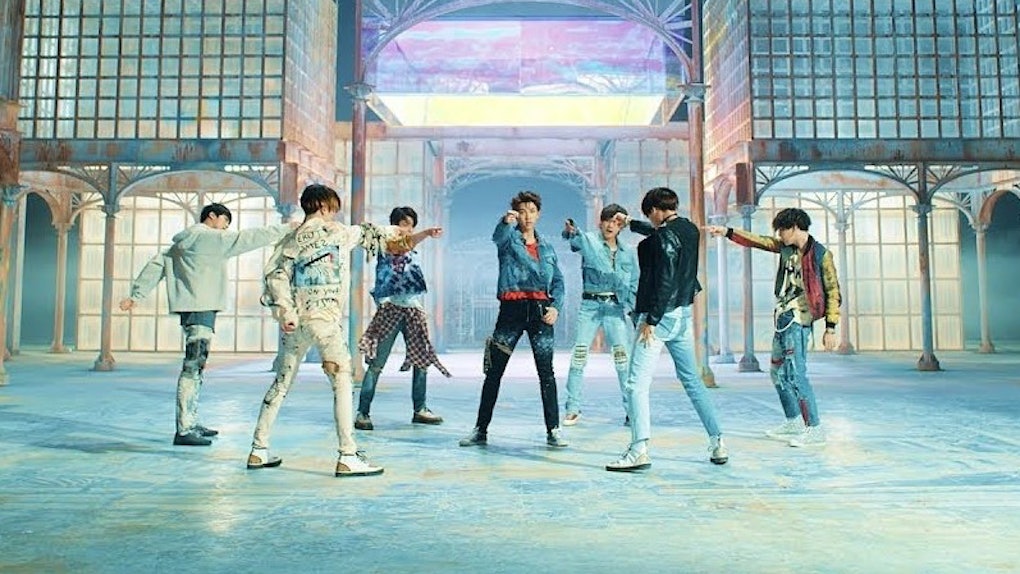 Here's Every BTS Video That's In The Bangtan Universe, So You Can Catch Up

One of the first things fans learn about BTS is they don't mess around when it comes to their music videos. Each of the group's visuals is stunning, and they never fail to leave the viewer thinking about its possible meaning behind it. As new fans start to piece together BTS' music videos, they begin to realize that many of them actually connect. The overarching storyline is known as the Bangtan Universe, and it exists not just in BTS' visuals, but in their webtoons and short stories as well. Since it can get pretty complicated, here's every BTS video that's in the Bangtan Universe.

To summarize, the BU involves a fictional storyline that has all the BTS members playing their own character. These characters have their own backstory, but they all connect in some way. If you see certain scenes or symbols repeating in BTS' music videos, that's because fans concluded the story involves time travel and alternate timelines.

It can be difficult trying to differentiate which videos are part of the BU, but according to fans, those that belong to this world will have the words "BU content certified by Big Hit Entertainment" at the bottom of the video's description. However, just because some videos don't have it, doesn't mean they're not connected. According to fans, here's every BTS video that's in the BU.

Unlike "No More Dream," "N.O," and "Danger," which were all choreography-heavy visuals, "I Need U" highlighted a storyline instead. All the characters appeared to be in hopeless situations, and since the clip didn't provide closure for them, fans were eager to learn more about their fates.

Fans waited in anticipation for two weeks until BTS dropped an extended version of the "I Need U" video. It's two minutes longer than the first, and it includes most of the same scenes, with the addition of a mysterious intro and a more violent clip involving V and what appears to be his character's father.

Continuing off the narrative in "I Need U," this 12-minute video begins with V cleaning himself off after an altercation. The scene then changes to V and the other characters experiencing a much happier time together away from the drama seen in the previous clips.

"Run" plays out like a movie, as the characters face many ups and downs together.

The Japanese music video mostly focuses on the song's choreo, but there are a few easter eggs throughout the clip that hint at its involvement in the BU. For example, if you watch all the "I Need U" MVs carefully, you'll notice Jimin is often connected with bathtubs, while Jin is connected with lily flowers.

ARMYs will recognize some elements of this video, like the mirror and feathers, which also appeared in the Korean version of the video.

The "Young Forever" MV includes scenes from both the "I Need U" and "Run" visuals, except with a twist: the scenes are covered in a vintage filter, making it seem like they were taken on an old-school camera or suggesting they happened in the past (hence that time travel theory).

"Begin" starts with Jungkook having a nightmare, during which he sees a piano on fire and hears a car crash. Although ARMYs didn't know it then, these two images hinted at Jungkook's character's fate later on in the BU.

In Jimin's short film, the BTS member is in a hospital. Despite his situation, Jimin flashes a sly grin to the camera, which is recording his every move. What's interesting is that Jimin's room has two hospital beds, but no one appears to be with him. As Jimin belts out "Lie," fans see images of the bathtub again, as well as a bottle of pills and an apple.

If you were wondering what led up to the fight between V's character and his father in the "I Need U" MV, this clip implies V and his sister did not have a good relationship with him. Additionally — similar to the "Run" MV, which involved V getting in trouble with the police — V is, once again, detained by cops.

In "Begin," Jungkook heard a car crash, and in "First Love," Suga appeared to witness one happening before his eyes, implying their characters' fates are connected. When Suga returned home, he saw his piano in flames.

When BTS revealed they had a song called "Reflection," ARMYs believed the images of broken mirrors in their past videos were meant to tease the song was coming.

Just like how Suga and Jungkook's characters' fates appeared to be interlinked, this video hinted Jimin and J-Hope's characters were connected, too, since both their videos took place in a hospital with the same painting in the background. Could the extra hospital bed in "Lie" be J-Hope's?

The video begins with Jin sitting alone at a table ready to eat, although there is barely anything on top of it besides a candelabra, wine glasses, an apple (one also appeared in the "Lie" video), and a white lily flower.

Jin's "Awake" seemingly the concept behind "Blood Sweat & Tears" because it also featured a scene with Jin at a table with a candelabra and wine glasses on top of it. Instead of him being alone this time, however, he is accompanied by the rest of BTS.

Here, fans will instantly recognize the all-too-familiar piano from Suga's "First Love," as well as the bright red apple from Jimin's "Lie" and Jin's "Awake." In one scene, Suga tries to help Jungkook, who is sick, but Jungkook refuses and, instead, pushes him back, referencing their fight in the "Run" MV. The most surprising scene of this video, however, is the last few seconds, which show RM and Jin's characters meeting at a gas station.

BTS' highlight reels deserve all the awards because, in just 13 minutes, the guys take fans on a rollercoaster ride of emotions. Their individual characters all had a storyline with a girl, but interestingly enough, Jimin and J-Hope's fates were once again tied together because they interacted with the same person. The last few seconds hinted at the possible time travel in the BU, since clips from several of BTS' MVs played in reverse.

18. "Euphoria: Theme of Love Yourself Wonder"

The intro gave a brief recap about the events that took place in the previous BU videos, before revealing some new info to fans: Suga's character was in a house fire, but Jungkook saved him. The ending scene is reminiscent of the one at the end of the "HYYH On Stage: Prologue" video, except instead of V jumping into the water, he is with the rest of BTS on the dock.

The first "Fake Love" teaser showed the members exchanging a variety of items for something in return. Among the items were a broken piece of glass (which looked like it came from a mirror), the painting from Jimin and J-Hope's hospital rooms, and a chocolate bar seen in J-Hope's "Mama." In return, they received a lollipop, a hair tie, and a birthday cake, all of which fans saw in the highlight reels.

In this video, Jin tries to protect a white lily flower in a glass lantern, once again showing its importance within the BU.

Finally, "Epiphany" teased Jin's character's possible connection to time travel and alternate timelines by having him replaying the same day over and over again.

BTS' "Film Out" doesn't have anything about the BU listed in its video description, but ARMYs are convinced it's still part of the group's fictional world. Since it makes many references toward their "Fake Love" MV, fans think "Film Out" takes place in an alternate universe, which could explain its connection to the rest of BTS' visuals without being directly involved in the BU.

If you're wondering why BTS' other music videos aren't on this list, it's because they're surprisingly not part of the Bangtan Universe. BTS' touring and performance visuals also continue to allude to the themes presented in these videos, although they're not officially connected to the BU, either. To learn more about this fictional world, make sure to go back and watch BTS' videos from the beginning.

This article was originally published on March 20, 2020

More like this
These Songs About Friendship Between Women Are Empowering AF
By Sydney N. Sweeney
Here's How To Stream The 2021 Lotte Duty Free Concert, & Catch BTS & TWICE's Performances
By Michele Mendez
These Iconic 'Grey's Anatomy' Songs Belong On Your Moodiest Playlist
By Abby Monteil
Stay up to date