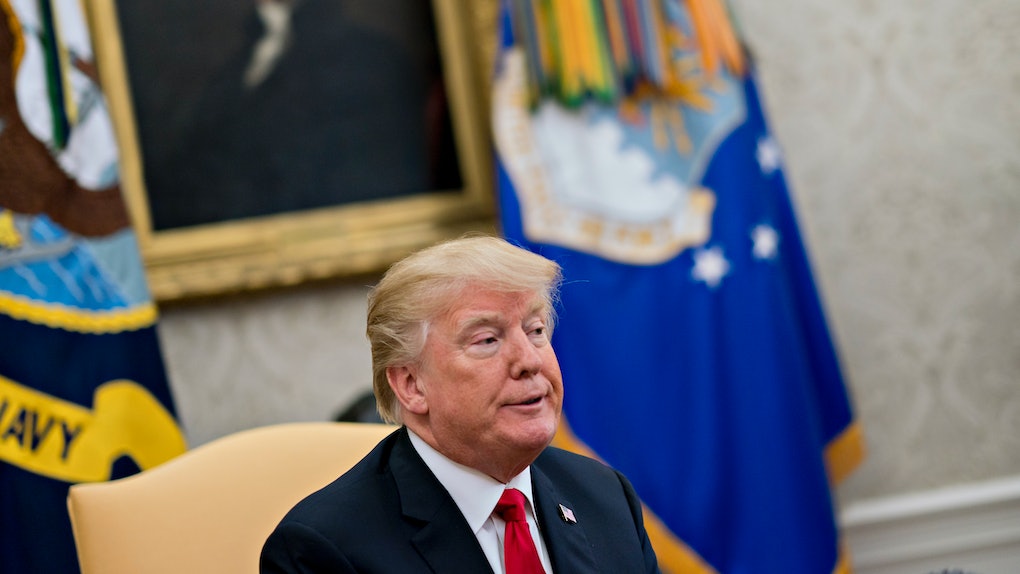 How Many People Have Left Trump's White House? It's Kind Of A Lot

UPDATE: On March 13 2018, President Trump tweeted that Secretary of State Rex Tillerson was being replaced by Mike Pompeo, who had previously been serving as director of the CIA. Trump confirmed at an impromptu press conference that he had not spoken to Tillerson before making the decision. In a statement about his departure Tillerson said , "The Secretary did not speak to the President and is unaware of the reason, but he is grateful for the opportunity to serve, and still believes strongly that public service is a noble calling." Tillerson's departure brings the total number of people who have left the Trump White House to 20.

EARLIER: As of March 6, 2018, a grand total of 19 Trump White House officials have either resigned or been fired from their posts. Those that have departed vary greatly when it comes to their seniority levels, as well as how dramatic their exits were. But there have been some pretty high-ranking officials that have left, which raises major red flags as to how stable this administration actually is.

You can expect a new person to announce that they are leaving the White House pretty much every day at this point. When these departures first started happening they came as a shock. But now that the media is used to these announcements, everyone is seemingly asking the same question — who will be next to go?

The answer to that question is up in the air at this point. But we do know everyone that has left, so here are a few of the most notable White House staff exits that we've seen to date.

Cohn was the president's top economic adviser, but on March 6 he announced that he would be leaving the White House, making him the 19th Trump staffer to part ways with this administration. There wasn't a specific reason given as to why this decision was made, but we know that it comes just days after Trump decided to announce new tariffs on steel and aluminum on March 1. Reports said that Cohn advised Trump against doing so, according to CNBC, so it's very possible that tensions ran high and Cohn couldn't handle it anymore.

Hicks was the White House communications director and said on Feb 28 that she would be leaving the White House. Her resignation was something of a shock considering that she has been one of Trump's most loyal advisers and has been working with him since he was on the campaign trail. Apparently Hicks left to pursue other opportunities outside of the White House, according to a statement from Trump. But her resignation came a day after Hicks gave an eight-hour testimony to the special counsel Robert Mueller, who is leading the investigation into possible collusion between the Trump presidential campaign and Russia, in which she admitted to telling "white lies" for the president. That definitely raised some eyebrows.

Rob Porter was a high-ranking White House official who resigned on Feb. 7 following domestic abuse allegations made against him. Two former wives claimed the abuse in interviews with DailyMail.com, published on Feb. 6. Porter has denied these allegations, telling the Daily Mail, "I will not comment about these matters, beyond stating that many of these allegations are slanderous and simply false."

The former Apprentice star served as the director of communications for the White House's Office of Public Liaison until she was reportedly ousted by Chief of Staff John Kelly in Dec. 2017. Omarosa went on to compete in Celebrity Big Brother, where she notoriously said that leaving the White House felt like she "got freed off of a plantation.”

On August 18, 2017, news broke that the former White House chief strategist was severing ties with Trump's administration. Considering Bannon's significant ideological background as the Executive Chairman of the controversial alt-right website Breitbart, this was a departure that virtually everyone was glad to see happen. According to The New York Times, tensions between Bannon and other prominent members of the White House prompted the decision for him to leave.

Scaramucci, or "The Mooch" as people have called him, only served 10 days as communications director before he was fired by Trump on July 31, 2017. Perhaps the most ridiculous White House tenure in history, his departure came just hours after General John Kelly was sworn in as the new chief of staff. While he was still communications director, in an on-the-record interview with New Yorker magazine (published on July 27), "The Mooch" called the chief of staff Reince Priebus a "f*cking paranoid schizophrenic.” Priebus was fired the next day, making way for Kelly — and for "The Mooch," the rest was quite literally history.

Spicer resigned as White House press secretary on July 21, 2017. He was one of the more colorful members of Trump's cabinet, and will always famously and forever be known for his outlandish press briefings. Apparently the tensions between "Spicey" and Trump is what led him to resign. But despite Spicer's short time in office, he will forever be immortalized in some of the funniest political SNL sketches in the show's history, courtesy of Melissa McCarthy.

The former FBI director was fired by Trump on May 9, 2017. Trump justified his decision by citing his mishandling of the investigation into Hillary Clinton's use of a private email server. The decision was definitely alarming, as Comey also happened to be leading an investigation into the Trump campaign's possible collusion with Russia during the 2016 presidential election. Considering that Trump later said that "this Russia thing" had been on his mind when he made the decision to fire Comey, it was definitely one of the more troubling decisions that the president has made to date.

Flynn resigned as national security adviser on Feb. 13, 2017, the first major departure that we saw from Trump's administration. The resignation came after he reportedly lied about his contacts with Russian officials to Vice President Mike Pence. Flynn has since pleaded guilty to lying to the FBI, with the news of his plea breaking on Dec. 1, 2017 following his indictment by special counsel Robert Mueller.

It's tough to say who'll be next on Trump's chopping block, but this list of names will definitely be expanding as this administration's term of office moves forward.