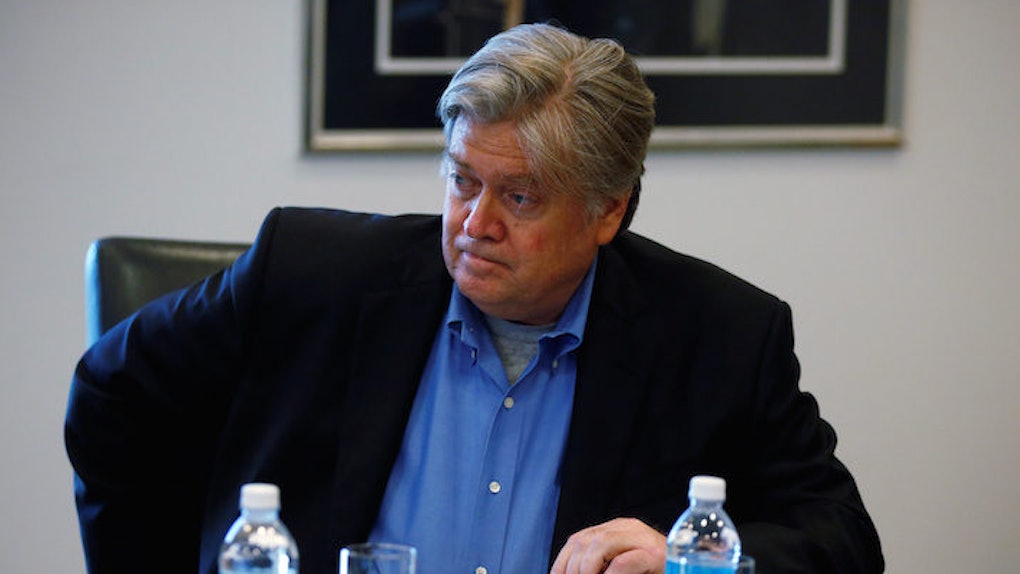 He is perhaps the scariest of Trump's appointments, which is, to say the least, a herculean feat.

Trump's cabinet is exactly like "The Expendables," but instead of every character being a too-old action star who can't do high-kicks anymore, they're too-old far right pundits who have built their careers on racially charged fear mongering, science denial and violent misogyny.

Mel Gibson could be in both, of course.

If you don't know Bannon, good. I'm happy for you. Because you lived a life without him in it until this point. Prepare yourself.

Bannon stepped down from his position running alt-right hub Breitbart News to serve as the CEO for Trump's campaign.

He has been rewarded for his work in getting Trump elected by being given a position in his cabinet.

Throughout his career, Bannon has widely been accused of harboring white nationalist views.

Now, before you close this article because of liberal media bias, the accusations are as simple as just quoting — word for word — things he has said, which come from a variety of sources, including his own wife.

As NBC points out, his ex-wife, during sworn testimony discussing a school (The Archer Academy) they had deliberated sending their children to, said this:

The accusations of his white nationalist views come from both sides of the aisle, including one of his own employees and conservative pundit, Ben Shapiro, who quit Breitbart because of Bannon's anti-Semitic views. Shapiro said in a recent article,

Breitbart openly embraced the white supremacist alt-right. [...] Breitbart has become the alt-right go-to website, with Yiannopoulos pushing white ethno-nationalism as a legitimate response to political correctness, and the comment section turning into a cesspool for white supremacist mememakers.

OK, before we move forward to the rest of Bannon's cruelty accolades, if you don't know what a chief strategist is, basically it is the person formulating Trump's message to the public.

In a word, he will be in charge of propaganda.

Now, before I am accused of bias again, I fully admit, yes, all politicians and certainly presidents engage in propaganda. Politics IS propaganda in many ways.

But you enter a different arena when the person in charge of propaganda ran the media website that wrote these articles:

Bannon himself explained that Breitbart is "the platform of the alt-right."

If you still don't get it, I'll put it this way: If Breitbart is "Game of Thrones," then Fox News is "Dora The Explorer."

And, since his appointment, Bannon has received consistent comparisons to Goebbels, Hitler's minister of propaganda.

Major organizations have come out in protest of Banner's appointment because of his racially charged and anti-Semitic views.

The Southern Poverty Law Center (SPLC) started a petition stating Bannon has "no business in the White House."

Here are just a couple quotes from the petition:

Bannon presided over a news empire where he, according to former staffers, "aggressively pushed stories against immigrants, and supported linking minorities to terrorism and crime." Worse perhaps, Bannon personally insinuated that African Americans are "naturally aggressive and violent."

And the Anti-Defamation League (ADL) also denounced him.

Now, the thing is, if you're a liberal, you might not have even known what Breitbart was because self-selection in social media has kept it hidden from you.

I have not once seen a single Breitbart News article on my feed, which is, if I didn't have this job, where I'd get any news I didn't purposefully seek out.

And yet, Breitbart News has exploded in popularity during this election.

Breitbart and Trump go together like mustard and hot dogs — or, to use a more accurate metaphor, mustard gas and, um, dead dogs.

And again, let me remind you, they run articles like this:

So, as I explained, Bannon's private life has been rife with his anti-Semitic views.

But, the truth is, anti-Semitism seems to bother conservatives very little these days. I don't know, maybe they consider it passe.

After all, Donald Trump retweeted half a dozen anti-Semitic tweets from literal white supremacists, yet he soundly won the presidency.

So how about we turn to Bannon's treatment of women.

Because, apparently, that is the one thing the American public has a problem with.

Need I remind you, Donald Trump was able to call Mexicans rapists and call for a ban on religious freedom without being hurt in the polls, but the moment he was heard threatening to molest a pretty white woman, his numbers plummeted.

We can begin with the fact Bannon was charged with domestic abuse of his second wife in 1996.

And here is another selection of the sort of stories Breitbart News runs.

If you want to see more examples, check out this compilation of all their most egregious headlines.

The argument I hear a lot is Trump "just said things to get elected." That argument is utterly mute now.

Apart from the fact he looks like he's been having a slow-motion heart attack for the past 12 years, Bannon has made it clear he seeks to promote the white nationalist agenda, and he now has the country's highest and most powerful platform to do so with.

This is an emergency.

When one man in a 24-hour period reiterates his plan to detain and deport 3 million people and appoints an outspoken white supremacist to run his propaganda, the Nazi comparisons stop being hyperbole.

Trump has surrounded himself with the most far-right people you can find in the political arena right now, and these are the people who will be running our country.

He literally appointed a climate-change denier to be the head of the Environmental Protection Agency (EPA).

Just think about that for a moment.

The head of the agency meant to protect the environment is a person who doesn't listen to any of the scientists who specialize in the environment. That's like the head of a hospital not believing in medicine.

Again, whatever your political affiliation, this is an emergency. It's important we act like it is.

So get informed, stay active, be willing to listen and change your mind without feeling humiliated or ashamed.

And let's actually do something about this before Twitter's comparison to Goebbels becomes a truth.