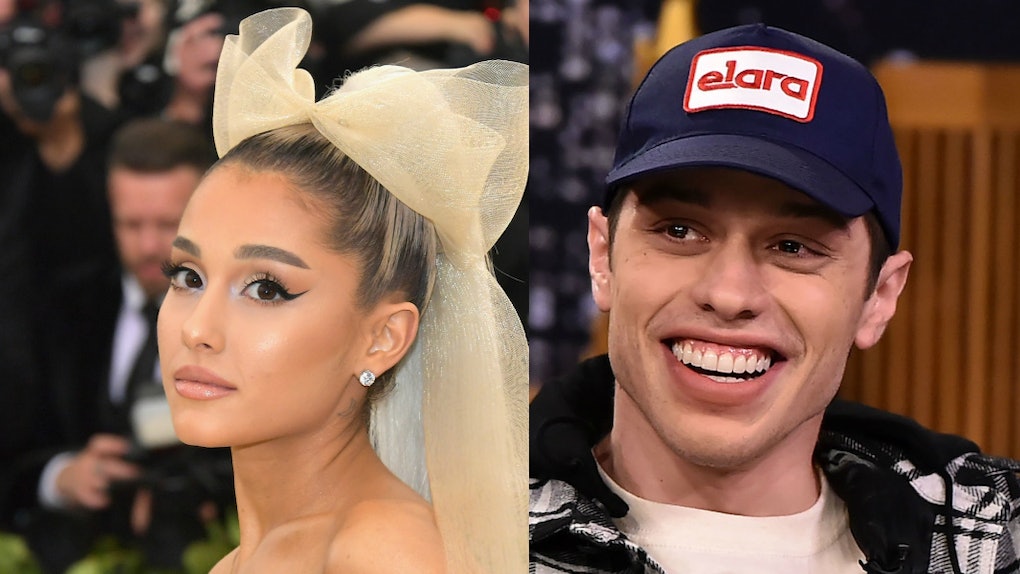 Ariana Grande and Pete Davidson are the celebrity couple that everyone is talking about these days. After their whirlwind romance that led to a surprise engagement, it's not shocking to hear that people are interested in these two. Davidson has an affinity for posting plenty of photos declaring his love for Grande, and he even has two tattoos that are dedicated to her. Well, Grande has returned the favor, and her latest tattoo has so much meaning. Ariana Grande's tattoo for Pete Davidson's late father is dedicated to Davidson's father, who died in the September 11, 2001 attack on New York City.

If an engagement wasn't enough to show that these two are totally in love, then I think this extremely touching tattoo has sealed the deal. Fans noticed the ink on the singer's foot while she was out with Davidson in New York at the end of June. The zoomed-in photo of Grande's left foot appears to show a tattoo with the number "8418," which was Davidson's father, Scott Davidson's, badge number with the New York City Fire Department, according to Entertainment Tonight. Scott has long been remembered by his son with an "8418" tattoo on Davidson's left arm.

Grande's new tattoo appears to be confirmation of how connected these two are to each other. Of course, the newly-engaged couple hasn't been shy about sharing their relationship, but the debut of Grande's "8418" tattoo dedicated to Davidson's father seems to solidify just how serious they are.

While the matching "8418" tattoos illustrate the couple's serious side, these two also love to have fun together. From the moments shared on Instagram, it seems like there's never a dull moment when Grande and Davidson are together.

When it comes to matching ink, this isn't their first foray into "twinning" tattoos. In a May 17 Instagram post, Davidson showed off a cloud tattoo on his left middle finger that looks very similar to a cloud tattoo on the same spot on Grande's left hand. The couple also reportedly has matching "H2GKMO" tattoos, which stands for Grande's favorite phrase, "honest to God, knock me out," per Cosmopolitan. Davidson also has a tattoo behind his ear of Grande's bunny ears mask and a tattoo of her initials, "AG," on his thumb. So when it comes to the ink game, these two appear to be all in.

Davidson has also mastered the I'm-so-in-love Instagram post. Ever since the couple went public with their relationship on May 21, 2018, Davidson has been very vocal about how much he loves Grande. He explained to Jimmy Fallon how lucky he feels to be engaged to Grande on an episode of The Tonight Show Starring Jimmy Fallon. Davidson exclaimed on the June 20 show, "Yeah, I feel like I won a contest."

The two often leave adorable comments on each other's Instagram posts, so it seems like the "lucky" feeling is a mutual one. Honestly, it's hard to miss the sweet online interactions between these two, because they share a lot of love notes to one another on the 'Gram.

While some people have been taken aback at the speed with which this seemingly out-of-nowhere relationship has progressed, Grande and Davidson don't seem phased by any negative talk. They truly have taken the "express lane" in this relationship, since they each only became single from longtime significant others in early May. Grande ended her two-year relationship with Mac Miller on May 9, and Davidson split from Cazzie David in mid-May.

Even so, Grande and Davidson appear to have truly moved on and fallen in love since their respective break-ups, and they are all about putting that love on display. Say what you will about how quickly Grande and Davidson have gotten engaged, but a gesture like the "8418" tattoo from Grande seems to prove they are very much in it for the long haul.