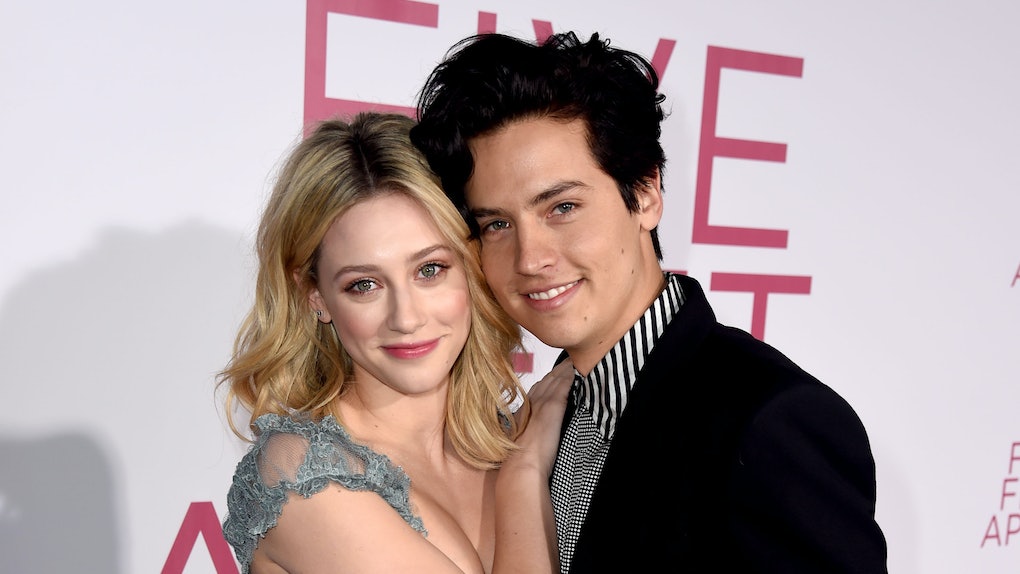 If you're a fan of the Archieverse TV franchise, then you know that the series offers endless options for couples to ship. Whether your fave Archieverse duo is Varchie, Veggie, Barchie, Bughead, Choni, Harvalind, Nabrina, Pambrose, or any other combination, it's hard to resist all the fictional romances the fandom provides. Unsurprisingly, some of those many on-screen relationships have led to off-screen hookups — sometimes even between actors who star on different series. If you're curious to know all the Riverdale, Sabrina, and Katy Keene actors who dated each other IRL, then I've got the scoop.

You're likely already familiar with the former relationship between Riverdale stars Lili Reinhart and Cole Sprouse, as well as the year-long romance between Riverdale's Camila Mendes and Charles Melton. There's also a good chance you know about the IRL relationship between Chilling Adventures of Sabrina's Jaz Sinclair and Ross Lynch. However, you may not be as familiar with some other Archieverse actor flings, including two relationships between Riverdale and CAOS characters and one between a Riverdale actor and a Katy Keene star. While some actor hookups are only rumored (sorry, y'all, but Kiernan Shipka and Gavin Underwood are not a thing), here are all the real Archieverse actor duos.

After more than a year of online flirting and dating rumors, Riverdale co-stars Lili Reinhart and Cole Sprouse finally went public with their relationship in May 2018, making their official debut at the 2018 Met Gala. The two went on to quietly date for another year before their relationship was first plagued with breakup rumors in July 2019. They dispelled those rumors at the time, but less than a year later, it was again rumored that the couple had split.

In May 2020, Page Six broke the news of Reinhart and Sprouse's second reported breakup, with a source claiming the split occurred months earlier. Neither Reinhart nor Sprouse directly acknowledged the maybe-breakup for months, until August 2020, when Sprouse finally cleared things up. "Lili and I initially separated in January of this year, deciding to more permanently split in March," he wrote in an IG post. "What an incredible experience I had, I'll always feel lucky and cherish that I had the chance to fall in love. I wish her nothing but the utmost love and happiness moving forward."

Riverdale's Camila Mendes raised eyebrows when she shared a photo on Instagram of a Labor Day 2019 boat hangout with some fellow Riverdale cast members. It all looked pretty innocent — except for the fact that she and Charles Melton were wrapped up in the same towel. A month later, Mendes went public with their relationship, posting a (since-deleted) pic of her and Melton with the caption, "mine." Over the next year, the couple did plenty of traveling together and showed each other lots of IG love, and in August 2019, Mendes celebrated their one-year anniversary with a romantic IG post.

Sadly, in December 2019, a source for E! News claimed Mendes and Melton had gone their separate ways — and apparently, they'd been broken up for months by that point. "They are taking a break from their relationship," the insider reportedly claimed. "Their relationship escalated very quickly and they are taking time now to focus on their work and themselves." According to the source, their hectic schedules led to the split. "They just both felt busy and overwhelmed and it was a lot of pressure on them," the source reportedly added.

Chilling Adventures of Sabrina co-stars Ross Lynch and Jaz Sinclair seemingly met on set in March 2018, which is when production for CAOS first began. By December, the two were sparking dating rumors, and fans became convinced the co-stars were more than friends after Lynch's sister, Rydel, shared a Snapchat of Lynch and Sinclair kissing on New Year's Eve in 2018. However, when asked about their relationship by Entertainment Tonight just a few weeks later, Lynch insisted Sinclair was just his "closest friend."

After they made their red carpet debut at the Balmain fashion show in Paris in January 2020, the two finally started showing off their love for fans. Lynch eventually confirmed he was in a "relationship" with Sinclair in an April IG post, and the couple has shared several loved-up pics together since then. Most recently, Lynch shared several snapshots from their trip to Maui in late 2020.

CAOS actor Adeline Rudolph became Instagram official with Riverdale's Tommy Martinez when she posted a cute snap of them together in December 2018. Soon after, they made their red carpet debut at the premiere of Good Trouble, and they've both shared plenty of sweet couple's pics since then. In November 2020, Rudolph took to IG to post a few videos and pics in honor of her and Martinez's two-year anniversary, and Martinez posted an adorable video compilation on Valentine's Day 2021.

Though the two are seemingly no longer an item (as they've deleted almost all of their IG pics together), Riverdale's Drew Ray Tanner reportedly dated Jasmine Vega from CAOS for at least a year. It seems the two dated from at least April 2018 (when Tanner posted an artsy shot of Vega on IG and they engaged in some Twitter flirtation) up until at least March 2019, when they attended a rugby game together, but little else is known about their relationship (or rumored split).

In February 2021, Katy Keene star Lucy Hale left fans shook after she was reportedly spotted kissing Riverdale's Skeet Ulrich in L.A., according to photos obtained by Page Six. The maybe-couple has yet to confirm the relationship themselves, so only time will tell what's going on between these two (if anything).

Thank you for providing the crossover moments I never knew I needed, Archieverse actors.