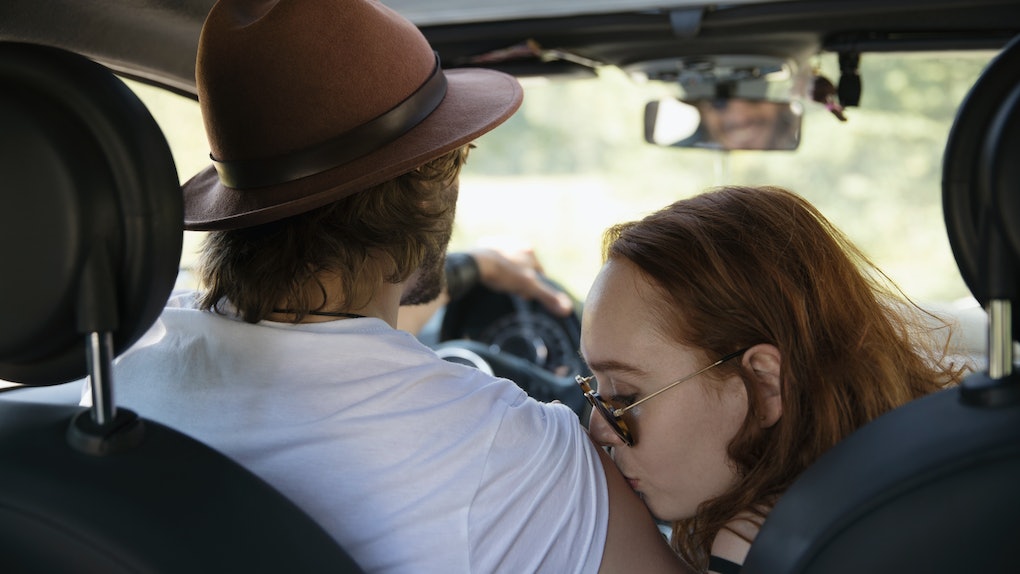 Sex can get boring quickly, especially if you're always doing it in the bedroom. But car sex can be thrilling AF, and apparently, it isn't going out of style. All you really need to make car sex fun and exciting are some car-friendly sex positions, a spacious back seat, and a little bit of privacy. Plus, you can rest assured that you and your SO aren’t the only ones getting it on in the car. A 2016 study published in The Journal of Sex and Research surveyed 511 women and 195 men with a median age of 20, and found that approximately 61% of the men and 59.5% percent of the women said they've had sex in a parked car. Fourteen percent of those participants said the first time they’d ever had sex with someone was in a car.

According to Vice, previous studies have indicated that car sex started to decline in popularity in the ‘70s, due to “rising gas prices, the shrinking size of cars, the closing of drive-in theaters, an increase in anti-parking regulations, and advancing urban sprawl.” Thankfully, classics are hard to kill. Amy Levine, sex coach and founder of Ignite Your Pleasure, previously told Elite Daily that a quickie in a fairly public place, like a parked car or a public bathroom, are so fun because of the adrenaline of potentially getting caught. "The lustful intensity of being in the passionate moment," really makes a quickie feel more intense than regular sex, Levine said.

Additionally, cars are fairly convenient places for young people who live with their parents or roommates to hookup with a certain degree of privacy. “I don't think society realizes how important the car is,” Cindy Struckman-Johnson, lead researcher of the Journal of Sex and Research study, told Vice. “I think [parked-car sex] was judged to be irrelevant, like an old-fashioned behavior. But really the car is a refuge for young people... who want to engage in a serious, romantic sexual interlude.”

It goes without saying that while sex in a car can be really fun, it also still qualifies as sex in public, which is ultimately illegal. So illegal, that it’s officially known as “lewdness” or “public indecency, and can be classified as a Class A or Class B Misdemeanor. If caught (and depending on the state), perpetrators could face fail time for up to 12 months, probation, a criminal record, a fine up to $500, and having to register as a sex offender, among several other serious consequences. So if the back seat is your hookup spot of choice, proceed with lots of caution.

Whatever your reason, if you’re down to get down in the car, these nine sex positions can help you make the most of your experience.

Ah, good ol' Missionary. Missionary can get boring in the bedroom for some, so try it in the back seat. It might just reignite your passion for it. If you run into the issue of repeatedly bumping your head on the car door, put a pillow or something soft (an old hoodie lying in the trunk, perhaps?) behind your head before you get going.

IMO, back seats were made for lying down. Lie down horizontally facing the front of the car and have your partner lay behind you so they can penetrate you from behind. You two might fit just fine in that position but, depending on just how into it you guys get and how much sweat and friction is produced, you may or may not roll off onto the ground, so proceed with caution. Put a pillow on the floor of the car, just in case, or push against the back of the driver's seat with your hand for leverage.

Legs In The Air

This position is not only awesome for an orgasm, but it also ensures you won't be so squished in the back seat. The vertical angle allows the receiving partner to take up less horizontal space, giving the penetrating partner space to kneel and thrust.

This is probably one of the most space-saving and easiest sex positions you can do in the car. Have the penetrating partner sit in the middle seat, and the receiving partner sit on top of them, facing them. If you’re on top, keep your hand on your partner’s shoulders, or even better, behind their head to help support it and protect it from hitting the window. With all that bouncing around, you don't want them suffering from a sexcussion.

Back seats are actually great for doggy style because both you and your partner can kneel on the seat, and maybe even use the center console as a support. To help hold yourself up, lean your hands against the window you're facing. And, maybe go ahead and crack that window, too, while you're at it. Things are going to get hot and heavy real quick.

This position works best in the middle back seat, because it gives you the most leg room. Have the penetrating partner sit facing forward and reverse straddle them. Bounce up and down, using their thighs and the headrests of the front seats for leverage. It'll also be easy for them to bounce you up and down because you’re so close together in such a confined space.

Get down on one knee in a lunge position and tell your partner to do the same. Then, while facing each other, have them enter you. Use their kneeling leg as a push-off point for riding them, and grab onto each other's backs for support. Added bonus: You'll both get in a pretty decent workout for your glutes.

This position is super intimate. Have your partner sit anywhere in the back seat, then mount them as you're facing them. When you get tired of doing the work, your partner can help you out by bouncing you up and down.

When all else fails — say, your partner is tired AF or you just don't feel like going all the way — go for the classic front seat oral. It might be a little tough with the center console between you, but don’t be afraid to move the action to the back seat if it’s easier. And whatever you do, don’t go down on your partner when they’re driving. Sex in public is already a risk as it is. Try explaining that to an officer.

This article was originally published on Oct. 6, 2016