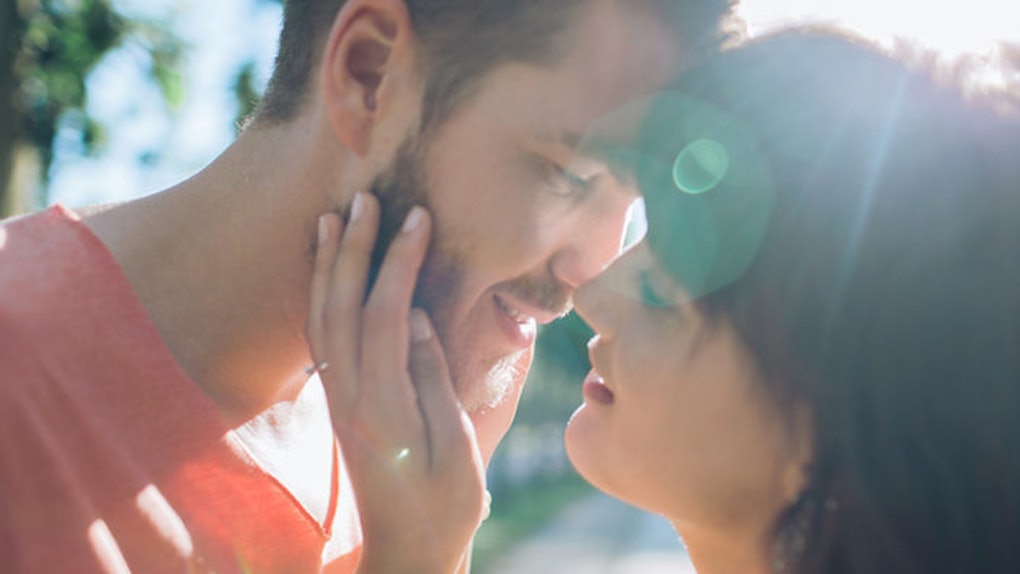 7 Things That Prove You're Not Crazy, He's Just Crazy About You

I have been writing about relationships for years.

By far the most common, relentless question that comes across my desk (or rather, my inbox) is some variation of "How does he feel about me?"

I totally get where the question comes from.

In my many years as a single girl looking for love, I have asked myself -- as well as my girlfriends, guy friends and Google -- the very same question.

I spent countless hours mentally tallying the signs he did versus the signs he didn’t. I have laboriously begun trying to inch my way toward a definitive answer to this seemingly impossible question.

However, I got absolutely nowhere.

Trying to figure out how a guy feels is a huge waste of time and energy because when he really likes you (or when he’s in love with you), you just know it. There are no questions to ask or riddles to solve.

When I started dating my now husband, I never once wondered if he liked me. Doing so would have been silly because it was just so obvious he was crazy about me.

Everyone around you will also know it.

If you have to ask, you already have your answer.

To break it down further, here are seven absolutely foolproof signs he's crazy about you:

1. He’s happy spending time with you.

This has a double meaning: It means he wants to spend time with you, but it also means he’s happy while he's spending time with you.

Here’s a secret most women don’t know about men: What makes a man fall in love is the way he feels when he’s with you.

Does he feel happy, at ease and comfortable being himself?

Or does he feel pressured and stressed, like he has to be a certain way and give you certain things?

Women typically have some sort of mental checklist of qualities they want, which could include smart, successful, charming, funny, tall or a full head of hair.

When they meet a guy who checks off enough boxes, they start to invest in him and develop feelings.

Men, on the other hand, don’t tally a list of traits. They consider how they feel around a girl.

If he wants to spend time with you and tells you how happy he is when he’s around you, that's a sign he’s falling hard.

He sees you as someone he wants to spend a lot more time with: maybe even a lifetime’s worth.

He considers you before making decisions, and carves out a place for you in his life.

He prioritizes spending time with you, no matter how crazy his schedule is.

Even if all he has time for is a quick cup of coffee in the middle of the day, he will spend that time with you.

Factoring you in isn’t just about spending physical time together: He also factors you in emotionally.

He considers your feelings, your desires and your needs, and he makes them a priority.

For example, if his buddies are planning a crazy bachelor party somewhere far away for a long weekend, he doesn’t just book a flight without telling you.

He lets you know what the plan is, and he shows concern for your feelings by making sure you’re okay with whatever it may be.

He also keeps you in the loop in a more general way. He won’t disappear for days at a time, take hours to respond to your texts or make tentative plans with you, just to never follow through.

He factors you in. He calls. He cares.

The surest sign he’s crazy about you really comes down to how you feel in the relationship.

When a guy really cares about you, it’s obvious. You aren’t left wondering.

He makes time for you. He calls.

He books the next date.

He doesn’t leave a crack of open space for doubts to creep in.

Does your relationship have you feeling stressed, worried and anxious?

Are you constantly analyzing his texts to figure out how he feels, and then carefully deliberating how to respond?

Do you spend more time trying to figure out how he feels about you than actually enjoying the feelings you get when you’re with him?

If so, these are big signs he’s not so into you.

When a guy really cares about you, he accepts you as you are, and loves pretty much everything about you.

He also doesn’t make you feel bad about the stuff he doesn’t love quite so much. Rather, he accepts them as being part of the wonderful package that is you.

When you feel like you can’t be yourself and can’t express how you feel, it’s probably because you’re with a guy who doesn’t fully accept you.

Your fear of doing something that will cause him to lose interest isn’t totally unfounded because this can happen with guys who are only mildly interested.

This never happens with guys who are seriously interested.

Consider the way you feel around him. Can you be yourself, or do you feel like you have to be some other way in order to get him to like you?

A guy saying he cares about you is nice. But ultimately, it’s pretty meaningless.

The true measure of how a man feels is the way he behaves.

What does he do to show you he really cares?

Texting you and saying he really likes you doesn’t cut it.

That is called "doing the bare minimum" to keep a girl on the hook. It isn’t an expression of genuine feelings.

Look at his actions. Does he make an effort to treat you like you’re special? Does he do things that make you happy?

Here’s a secret: When a man loves a woman, her happiness is his happiness. He can’t do enough to put a smile on her face.

If your guy is only happy when you do stuff for him and doesn’t really bother doing things to make you happy, he is either just a very selfish person or not interested.

6. The way he feels about you isn’t dependent on how you make him feel.

A guy who cares will want to be there for you when you're upset.

He will want to comfort you, support you and understand you.

A guy who doesn't care about you will get annoyed when you’re having a problem. He won't want to be there for you when it's inconvenient for him.

Sure, this kind of guy will be there when things are great and when you can give him the affection and approval he desires, but he'll back away when you’re unable to give these things to him for whatever reason.

You’ll know he truly cares by the things he notices about you, and what he appreciates. He may even see you more clearly than you see yourself.

A healthy relationship is rooted in seeing and appreciating the other person for who he or she is.

This means he calls you his girlfriend or takes the next step in the relationship.

He doesn’t tell you he loves you and you’re the best thing since Nutella, but he "can’t be in a relationship right now."

When a guy really cares about you, he wants to lock you down.

In fact, he’s afraid not to because then, he risks losing you.

When he’s in love, the future is no longer some scary place. It becomes something he looks forward to sharing with you.