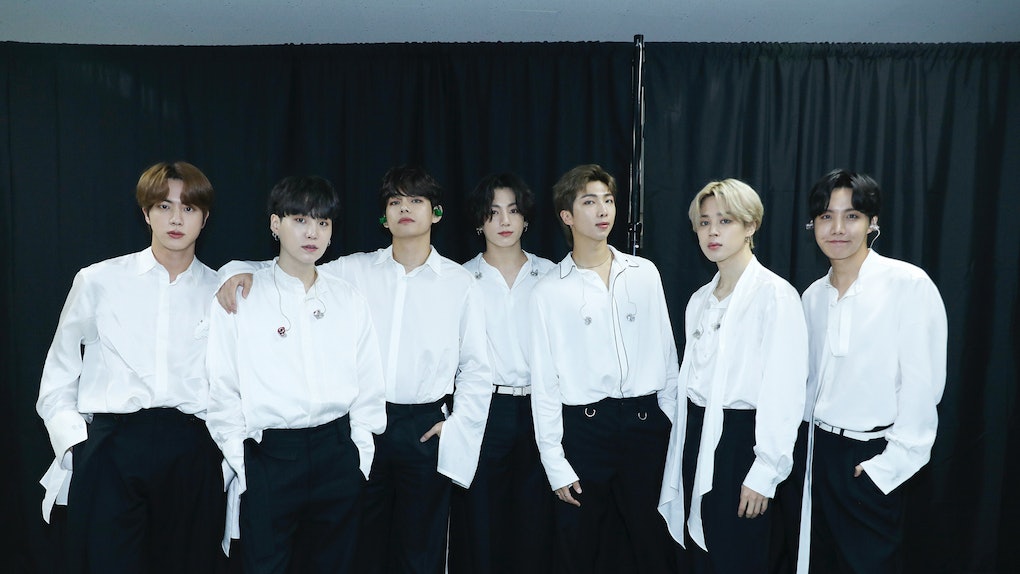 These Misconceptions About BTS & Their Music Need To End Right Now

Shortly after BTS appeared on MTV Unplugged on Tuesday, Feb. 23, German Bayern 3 radio host Matthias Matuschik took issue with their cover of Coldplay's 2005 hit, "Fix You." Despite the cover having been widely praised and gaining a combined 28 million views across MTV UK and BTS' YouTube channels as of March 12, Matuschik called the performance "blasphemy" and compared the group to "some crappy virus that there will be a vaccine for soon" — a deeply racist remark. Following immense backlash from fans and non-fans alike, the station issued an apology for Matuschik's remarks, dismissing his comments as expressing his "opinion" in an "exaggerated" way. Unfortunately, this isn't the first time BTS has been the subject of problematic "opinions." The criticism they face is often rooted in xenophobia and racism, and these misconceptions about BTS and their music prove it.

Like so many other POC, BTS has dealt with unfair treatment and discrimination while breaking into the western music industry. For example, they're the most popular group in the world (they were the world's best-selling artists of 2020, beating out the likes of Taylor Swift), but many radio stations in the United States still refuse to play their music because they sing mostly in Korean.

This refusal to put BTS' music in rotation despite their immense popularity can be traced to the xenophobic belief that listeners will not enjoy music that is not English. BTS' battle against the behind-the-scenes xenophobia of radio is subtle, but they also deal with downright racist comments. In February 2020, the Howard Stern Show's Salvatore Governale joked there was "no way [BTS] don't have the coronavirus," a comment Stern himself called racist. That August, fans caught Star 102.1 FM mocking BTS' Korean lyrics on air.

As a Korean group, people make certain assumptions about BTS. While some criticism of "boy bands" is to be expected, BTS deals with far more problematic misconceptions rooted in ignorance, xenophobia, and racism that prevents people from even giving their music a chance. Below you'll find some of the biggest misconceptions about them that need to end ASAP.

Myth #1: BTS is the product of a K-Pop machine.

K-Pop idols train for years before they debut (and some even train for a decade), which is why there's a stereotype they're manufactured into picture-perfect celebrities that churn out bubblegum pop hits written and produced by their agencies.

While BTS did train under Big Hit Entertainment, they're far from being manufactured. Many of the members, like RM, Suga, and J-Hope, already had underground music careers and were fully formed artists before they ever stepped foot in a Big Hit audition room.

Plus, while Big Hit is now the most prominent label in Korea, that wasn't the case when BTS first debuted in 2013. At the time, Big Hit was just a small, struggling company with very few resources. In fact, the future of the company depended on BTS' success. In other words, the Big Hit that discovered BTS could hardly be considered "a machine."

People think BTS doesn't write their own music, but that's just not true. They're actually heavily involved with producing, composing, and writing their own songs. According to the Korean Music Copyright Association, RM — the leader of BTS — has over 160 writing credits to his name, Suga and J-Hope have over 100 each, and Jin, Jimin, V, and Jungkook each have a handful of credits that are growing every day.

Myth #3: BTS isn't allowed to do what they want.

Along with the stereotype they're manufactured, there's also the belief BTS (and K-Pop groups in general) are controlled by their agencies. While there are indeed some labels that have strict rules for their artists, that doesn't mean every label operates the same way.

For example, in thought pieces about BTS and K-Pop, writers sometimes reference dated K-Pop norms when talking about the group even though they don't adhere to any of them. "The members of BTS find their lifestyles and freedom of expression tightly policed — no significant others, no tattoos, no divisive thoughts on politics," an October 2020 Bloomberg Business article stated, despite the fact Jimin had at least four tattoos and Jungkook had an entire sleeve at the time. The article was also written on the heels of BTS speaking out against racism and supporting the Black Lives Matter movement.

Critics' tendencies to pigeonhole BTS into the manufactured image they have about Korean pop groups shows an unwillingness to see the group (and even K-Pop labels) as unique individuals.

Another huge misconception is BTS just does "bubblegum pop" music, and thus, can't be taken seriously like their pop peers (think Ariana Grande or Billie Eilish). In reality, their discography is probably one of the most diverse ones you'll ever hear. They've explored genres such as rap, rock, EDM, R&B, Latin, funk, ballad, country, and more.

At the same time that people undermine BTS' artistry by calling it "bubblegum pop," when it comes to major awards shows, there's been a historical tendency to relegate them to K-Pop categories, effectively boxing them and other K-Pop acts out of main categories alongside other esteemed pop acts like Taylor Swift and Lady Gaga.

In July 2019, fans criticized MTV for nominating BTS for Best K-Pop, while not recognizing them for main awards like Video of the Year, Artist of the Year, Song of the Year, or Best Pop, despite their MotS: Persona album and music video for "Boy With Luv" outperforming that of the main category nominees that year like Ariana Grande, Cardi B, and Halsey.

It wasn't until 2020 that BTS started to see major award show recognition in main categories, four years after they first burst onto the U.S. music scene.

Myth #6: Their fans are all teenage girls.

There's nothing wrong with having a fanbase that's all teenage girls, but there's a certain level of misogyny when critics and others in the media talk about young, passionate female fans. These media professionals usually try to downplay BTS' success by insisting girls aren't actually interested in their music and instead, they like them for superficial reasons, like the members' looks. In turn, critics often don't take boy groups seriously.

But BTS' fanbase is diverse, spanning different genders, ages, races, and nationalities. That's exactly why ARMYs are able to mobilize to support the causes they're passionate about. They've come together time and time again to bring attention to important causes around the world. When BTS donated $1 million toward the Black Lives Matter movement, ARMYs matched that amount in a day.

Myth #7: Their album achievements are due to selling "album versions."

Historically, K-Pop groups have sold different versions of their albums with specialty photos and other goodies included in each version. Critics of BTS claim their fans are buying the different versions to get pretty pictures and not their music. Perhaps that would be a fair criticism... if those making the critique were consistent.

Up until July 2020 when Billboard cracked down on the practice, almost every artist, from the Jonas Brothers to Billie Eilish, bundled their albums with concert tickets and merchandise to pad their album sales and chart higher on the Billboard 200. It was a completely normal practice. Meanwhile, some of those artists also even sold versions of their albums, but were never subject to widespread critiques they pad their sales.

In fact, ARMYs couldn;t help but notice that when Swift bundled her 2017 Reputation album with $20 magazines from Target and encouraged her fans to buy up to 13 copies to increase their chances of securing concert tickets, the New York Times tweeted it out with a headline simply highlighting her sales with no mention of the bundling involved. In 2019, they called her Lover diary entries "must-read" components with no mention of the fact they were part of the four collector versions of the album (and bundled). On the other hand, in 2020, when they tweeted about BTS' MotS:P album's high sales, they pointed out the group sold album versions. This practice gave anyone who didn't click in to read the articles a skewed sense of who uses "gimmicks" and who doesn't. Elite Daily reached out to the New York Times for comment, but did not hear back by the time of publication.

Even before Billboard's crackdown, BTS never bundled. All of their album sales are for actual albums. Not to mention, their latest album, BE, didn't have alternate versions and they still sold over 500,000 units in the U.S and over 2 million copies in Korea.

Every artist is chasing a No. 1 album, but lobbing critiques at or adding disclaimers to BTS' sales achievements while ignoring (and sometimes even praising) the same practices by other white or American artists who play the same game is just another example of double standards fueled by feelings of xenophobia.

There's a lot of talk about who's going to be "the next BTS" because some people think their popularity will fade in a few years. ARMYs will argue BTS is here to stay because they're continuing to make history every day. In November 2020, they became the first Korean group to get recognized in a major Grammys category, snagging a nomination for Best Pop Duo.

Despite all of the misconceptions about them, BTS has continued to push through negativity and prove their haters wrong.