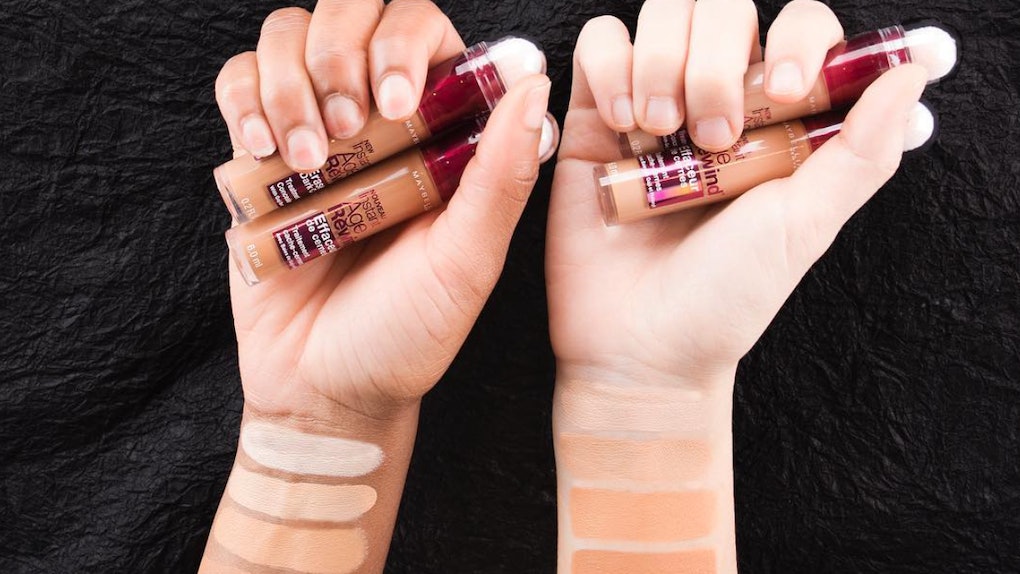 Do you know how hard it is to be the most popular anything in America? Spoiler alert: pretty freakin' hard. So when it comes to a huge space like the beauty industry, dubbing a product the most popular concealer is a pretty major claim. An impressive feat for any product, certainly, so for the very best to also be available at the drugstore? Incredible. Ladies and gentlemen, a round of applause for Maybelline New York, who have saved our budgets and snatched our under-eyes all at once, by giving us the most popular concealer in America.

According to Allure, Maybelline released a press release announcing that their Instant Age Rewind Eraser Dark Circles Treatment Concealer ($10, maybelline.com) soared past the competition in both the mass market and in prestige makeup categories. According to the release, this is based off of data gathered by global info and measurement company Nielsen from February 2017 to February 2018. The data compared concealer sales at major retailers, and found Instant Age Rewind had earned the number one spot overall, so cue the applause.

Personally, I'm no global info and measurement company, but I can attest that this here is a pretty damn good concealer. The twist-up packaging and sponge applicator make it easy to apply just the right amount of product underneath the eyes, and the formula itself is hydrating and brightening, thanks to an infusion of goji berry and Haloxyl. It's been a staple in my makeup bag for years, and I've recommended it to many a friend in college who felt they had dark circles as a result of too many all nighters. (After all, it was usually my fault for making them stay out all night.)

In addition to 10 skin-toned shades, the range also includes a pink-toned brightener and a yellow-toned neutralizer, the latter of which I can attest is particularly bomb for extremely dark circles. The concealer started with just six shades, and only recently expanded to include six additional shades in January, after listening to customer feedback about the need for darker shades, as well as at least one extremely fair shade.

I remember YouTuber and cosmetics creator Jeffree Star praising the formula for "blending out to perfection" in his "Full Face Using Only Maybelline Products" video, as well as YouTuber Jackie Aina's over-the-moon reaction when she could finally buy the amazing formula in her shade. She even made a dedicated video praising the shade expansion, and claimed the product left her "edges slaughtered." (If you're not hip, just know that's a very, very high compliment.) Tons of viewers trust Star's advice when it comes to products for fair skin, and Aina has become a major advocate for inclusive shade ranges after helping Too Faced expand their Born This Way Foundation ($39, toofaced.com), so I'm willing to bet their viewership helped this concealer earn its title as the best of the best. See how beneficial expanding your shade range can be??

If, for some reason, you're skeptical about both the Nielsen data and my word, I'm a little insulted, but still eager to convince you that this concealer lives up to its hype. Simply scroll through the comments on Maybelline's many Instagram posts of the product to see tons of consumers raving about the results of their ride-or-die fave.

"Sometimes I don't use foundation and if I want to cover my redness I use this concealer," wrote one commenter. "It's so lightweight and feel[s] like you don't wear anything."

"This is my go to concealer! My ride or die product," wrote another loyal fan on a Maybelline post. "I just cannot do without it. It conceals my dark circles like a pro. I'm in the shade medium and I'm already restocking it . I use it to hide my problematic areas and then top it off with some fit me concealer for brightening up. Some serious under eye magic happens with this😍❤".

IMHO, Nielsen got it right when they dubbed the Instant Age Rewind Concealer number one. Let's hope that they expand their shade range even further in celebration of their kween status, and also that other brands, high and low end, start stepping up their formulas to try and compete. And if you still aren't convinced? You might have to try this one out for yourself — but don't say I didn't warn you about how bright and refreshed your under-eye area will be!

More like this
These Cute & Easy Summer Hairstyles For Long & Short Hair Couldn't Be Hotter
By Margaret Blatz
These Stick-On Face Jewels, Gems, & Nail Art Are Coming For Your Selfies
By Margaret Blatz
The Morphe x Coca-Cola 1971 Unity Collection Leads With Peace & Love — EXCLUSIVE
By Theresa Massony
Stay up to date