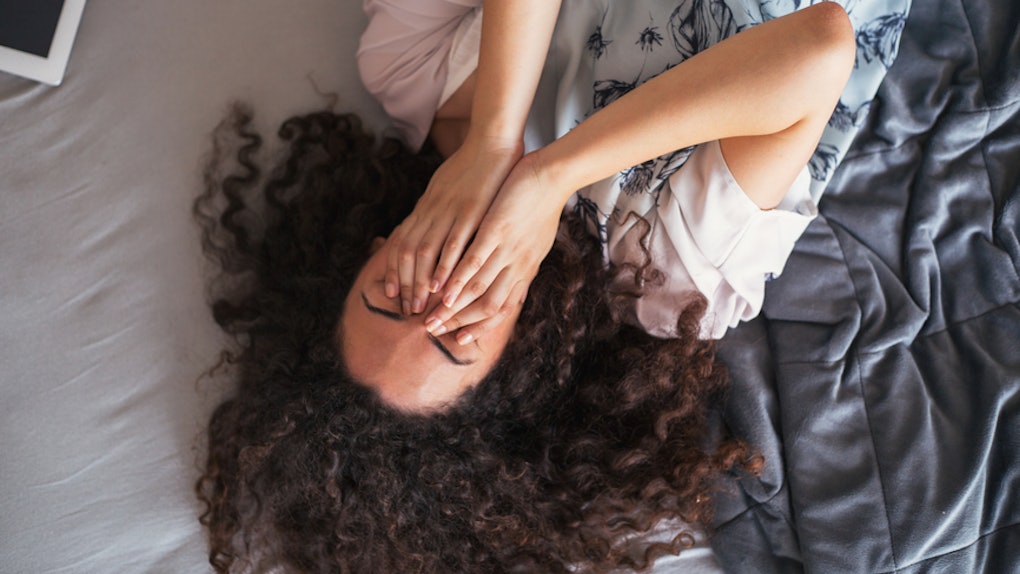 Pulling an all-nighter can sometimes be a necessary, albeit evil aspect of life. As a hardcore procrastinator myself, I've had to pull my fair share of all-nighters after pushing off homework assignments and projects for way too long, until I'm pressed against the deadline with no other option but to chug coffee and stay up all night. But as most procrastinators know, it's not the all-nighter that'll kill you; it's the following day, when you're so tired, it feels like your eyes are bleeding. Figuring out how to feel awake after an all-nighter can feel like a science, because it technically is. Understanding the science of restfulness is the single best thing you can do to fuel your all-nighters — or, at least, survive them.

To be clear, pulling an all-nighter is literally never a good idea: Research from Texas A&M University revealed that, even if you're staying up all night to study for an exam, or prepare for a big work meeting, the cons pretty much always outweigh the pros. David Earnest, Ph.D., a professor with the Texas A&M College of Medicine who specializes in the study of circadian rhythms, explained,

With that said, you're always better off getting some sleep than none, which is why a prophylactic nap could be your best option when you have to cram all night the day before an important deadline. According to Proactive Sleep, a prophylactic nap is essentially a nap that you take in preparation of sleep deprivation, in which you try to get at least one full REM cycle in during your nap. If you can find a way to sneak in a quick 90 minutes of snoozing, you might feel a world of difference in the morning.

But if the sleep deprivation deed has already been done, fear not — just follow these six tips, and you'll make it through the day with as little fatigue-induced trauma as possible.

1. Sleep Normally In The Days Leading Up To (And After) The All-Nighter

Although it's impossible to make up for the hours of sleep you've already lost by just sleeping more the next night, you can set yourself up to survive an all-nighter by being generally well-rested on the days before and after the all-nighter.

The best way to stay rested is to get seven to eight hours of sleep as often as you can, according to Healthline. This will give your body a foundational base of good rest and overall better health, so that you don't totally fall apart on the rare occasion when you have to stay up all night getting something done.

After pulling a serious all-nighter, the last thing you need is to experience a gnarly sugar crash at 11 a.m., effectively wiping you out for the day.

Instead of opting for sugar, go straight to the protein. According to a 2011 study published in the journal Neuron, protein-based foods will encourage wakefulness, while carb-based foods (like spaghetti and junk food) will make you sleepy. Go for the former, and avoid the latter for now.

Make sure you drink plenty of water throughout your all-nighter, as well as during the following day. According to the National Sleep Foundation, dehydration can make you feel cranky, sluggish, and just plain less peppy than you usually feel, so it's the last thing you want to add on top of your already-brutal fatigue.

Try to make a point to drink a glass of water an hour, so that you've reached your hydration goals for the day (eight or so glasses of water) by the time you've finished burning the midnight oil.

4. Dab Some Peppermint Essential Oil On Your Skin

Feeling like you're one minute away from passing out at your desk? You might want to dab some peppermint oil on your wrists, or even on the skin behind your ears. A 2005 study published in the International Journal of Psychophysiology revealed that peppermint oil's fresh, minty scent can help you feel immediately more awake in a matter of moments. Give it a whiff!

5. Plunge Into Some Small Talk

Keeping yourself distracted with conversation and work projects might just help you forget how tired you are, according to Reader's Digest. Richard Shane, Ph.D., creator of the Sleep Easily method, told the outlet,

Engaging in something interesting to do or talk about can stimulate your mind to feel more awake.

If you don't feel like talking to your co-workers, consider occupying yourself with a brain game, like a crossword or some sudoku.

6. Go For Walks Periodically Through The Day

Keeping the blood in your body circulating is one of the best ways to fight off exhaustion. A 2016 study published in the International Journal of Behavioral Nutrition and Physical Activity showed that sitting for long periods of time is likely to increase your fatigue, while spurts of exercise (even something as low-key as walking) can lead to increased blood flow and boost your overall energy levels.

Make it a point to get up from your desk and take a couple of quick strolls when you get the chance throughout the day. Hey, it's better than falling asleep in your cubicle, right?