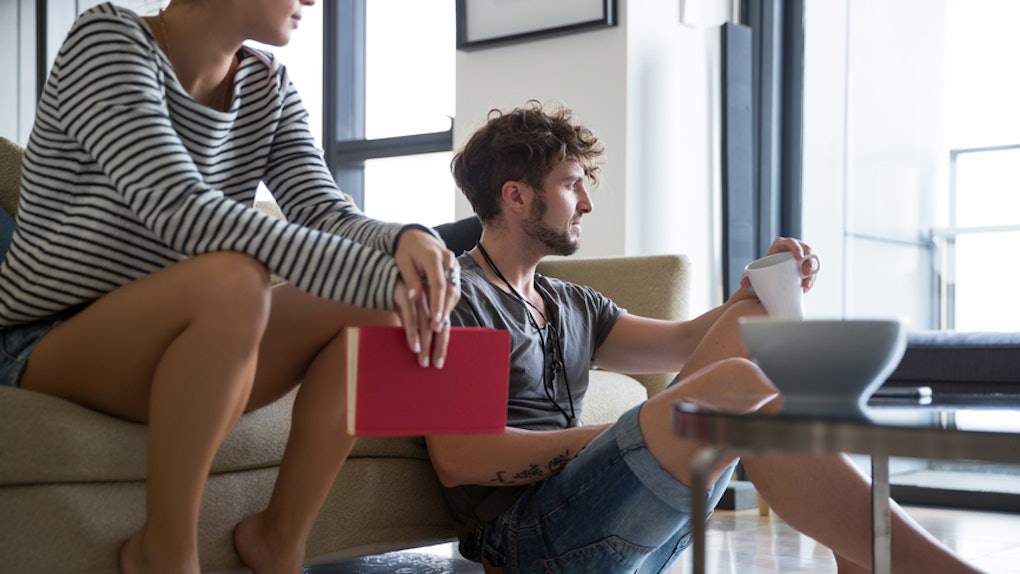 Fighting Early In A Relationship Isn't That Weird, But Do These 4 Things Before The 3-Month Mark

Arguing with your significant other isn't necessarily unhealthy. There isn't an approved list of fights that it's "normal" to have, or specific topics you should be concerned about disagreeing with your partner on. In fact, it's less about what you're actually fighting over, and more about how the two of you resolve conflict. Fighting early in a relationship doesn't mean you and your significant other are doomed, but there are some decisions it's important to make together in the first few months of dating to ensure you are both on the same page.

I spoke to two experts about the kinds of fights you should work through at the beginning of your relationship, how to have productive arguments, and signs your conflict style may not be as healthy as it could be. Fighting early in a relationship isn't always a red flag, but it is important to take these four steps before you reach the three-month mark.

If you're struggling to communicate effectively with your new partner, don't panic. Here is everything you need to know to get through the first fights of your relationship — plus, proven strategies for working through new conflicts as your relationship continues to progress.

In the first few months of dating, it's important to clarify your boundaries and make sure you understand each other's expectations. You want to be in agreement early on, to prevent unnecessary conflict down the road. Unfortunately, at the beginning of a relationship, both partners tend to shy away from discussing critical topics.

"This is the time when they're figuring each other out, and it's also the time when they're the least confident in asking their partners for clarity, articulating boundaries, and feeling secure that making requests won't scare the other one off," says Vienna Pharaon, a licensed marriage and family therapist in New York City. She says that some common conversations you should be having include establishing boundaries and "essentially agreeing to the terms of the relationship."

Early on, discuss what exactly you're doing, whether you're seeing other people or in an exclusive relationship, and what you're each ultimately looking for. If you don't initiate these conversations at the start of your relationship, you won't know whether you and your partner are on the same page.

Have The Difficult Conversations

Meredith Shirey, a couples therapist and the founder of a private counseling practice in New York City, explains that early in a relationship, you are more likely to overlook big conflict indicators. Whether it's a disagreement about culture, family, time management, or affection, when you're feeling connected to your partner and positive about the relationship, you tend to minimize the importance of these potential differences. "As you’re getting to know your partner, you’re going to be more flexible and accommodating," says Shirey. It's not until later on in the relationship that you'll see a rise in conflict and really notice those differences coming up.

The more difficult the conversation, though, the more important it is to have. "If there’s a point of contention, if something is bothering you, how likely are you to let your partner know that that’s an issue for you?" asks Shirey. "If you say not very likely, why is that? Do an internal check: 'Is it because I’m fearful of my partner’s response or I’m afraid they’re going to be defensive or invalidate me in some way?'" How you handle these more complex issues is a huge indicator of whether or not your relationship will last.

Learn How To Have Healthy Arguments

"Healthy arguments involve self-aware and self-reflective individuals who listen to understand. These conversations require vulnerability and ask us to bravely share our hurt, fears, and insecurities with another," says Pharaon. It's OK to have conflict, but you want to discuss with your partner, rather than argue. In order to share your side more effectively, she suggests thinking about the message you're trying to communicate before you speak.

"Take ownership of what it is you want and need, and stay away from blaming the other person. The healthiest couples make the other person’s experience and feelings just as important as their own," Pharaon says. If your partner is responsive and makes you feel validated, that's a good sign your relationship will last. She notes an important quote from Shonda Rhimes' Year of Yes: "The more difficult the conversation, the greater the freedom."

Additionally, the sooner you can talk to your partner about a problem, the better. "People who can address things sooner and have a more peaceful way of talking about it tend to have better outcomes in their relationship," says Shirey. It can feel easier to avoid talking about conflict, especially when you're worried about starting a fight, but Shirey says that avoidant behavior might actually be indicative of an unhealthy dynamic.

Pay Attention To The Four Predictors Of Relationship Failure

"Contempt means saying something with the intention of being disparaging of your partner’s character," explains Shirey. She says that contempt means communicating a sense of superiority. It can be expressed through any kind of name-calling, eye-rolling, or the use of sarcasm that’s not playful, but meant to hit a nerve. "If contempt is prevalent, you can almost guarantee that those couples aren’t going to make it, unless they do a giant overhaul of their communication very quickly," says Shirey.

Shirey describes criticism as a lighter version of contempt — a complaint about who your partner is as a person. Criticism is easier to bounce back from than contempt, but it still needs to be addressed. "One person will make a critical comment and the other person will respond with a defensive reaction," says Shirey. "You see that snowball escalation where there are slamming doors, raised voices, and eventually getting to stonewalling, where you retreat from the relationship. You’re so emotionally overwhelmed that you have to put some distance there."

If it feels like everything is a fight, if you're always raising your voice, calling each other names, or feeling forced to walk away, you need to pause and think about whether this is a good relationship to stay in. "How you manage conflict says so much about the dynamic in the relationship," says Shirey. "It’s not relevant how much you’re fighting, but how you’re fighting."