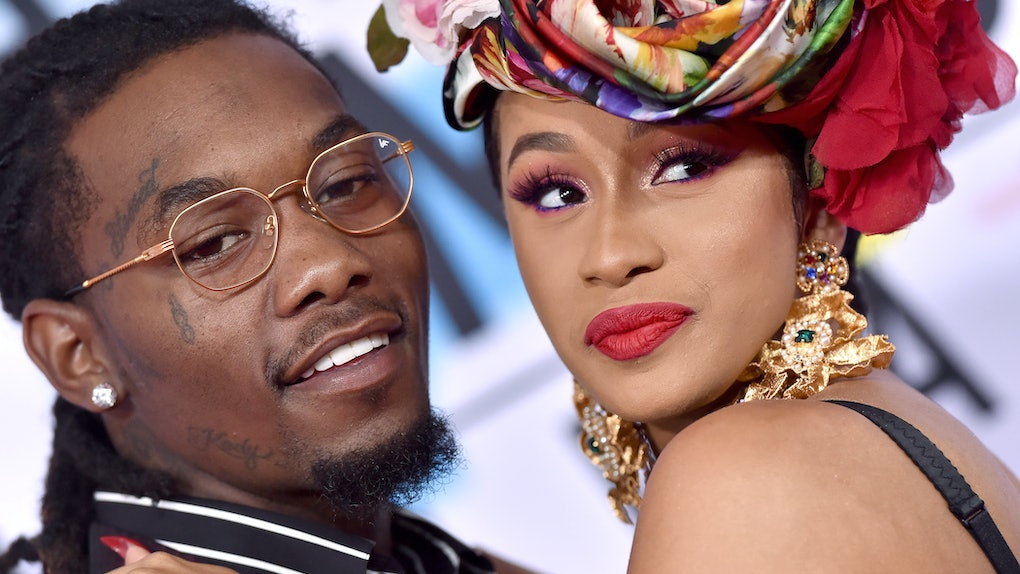 15 Celebrity Couples Who Broke Up & Got Back Together

Is it always a good idea to get back with your ex? Um, probably not. But for some couples, a break (or two) is exactly what their relationship needed to succeed. There are several celebrity couples who broke up and got back together over the years, and while not all of them worked out (you gave it your best shot, Justin and Selena), many others ended up making their love last. (and I'm proud of you for that, Justin and Hailey.) Whether they split up for several years or less than a day, a few meant-to-be A-listers have found their way back together... at least, for now. (Sorry to be #cynical.)

Again, reconciling with an old flame isn't for everyone. Some Hollywood stars who gave their relationship a second chance didn't end up with a happily-ever-after, and that's OK. However, other celebs have proven a breakup isn't always the final chapter in a love story. Don't believe me? Just imagine for a moment a world where Kate and Will or Chrissy and John didn't get back together. Pretty terrifying, am I right?

If you don't believe it's possible to kiss and makeup with an ex, then perhaps these celeb couples will change your mind.

Justin Timberlake and Jessica Biel first met in 2007 when she attended a birthday party Timberlake was throwing for one of his friends, and it wasn't long before the two were official. However, in March 2011 — four years into their relationship —Timberlake and Biel decided to call it quits. Their reps released a statement to People explaining the split, saying "...we are confirming that they mutually have decided to part ways. The two remain friends and continue to hold the highest level of love and respect for each other." Luckily, their breakup was short-lived, and by December 2011, the couple was engaged.

Kristen Bell and Dax Shepard were first introduced at a dinner party in 2007 and got engaged two years later, but apparently, the couple briefly broke up before things got serious. "We were dating for about three months, and I already knew that I was in love with him, and he was hesitant because he knew he was still dating other people," Bell told PopSugar in August 2017. "He sat me down and said, 'I can't have this right now. I think you're wonderful, but I am still dating other people.'" According to Bell, it only took four days for Shepard to realize his mistake.

Though Prince William and Kate Middleton first met as students at University of St Andrews in 2001, they didn't become an item until the end of 2003. The couple dated for nearly seven years before William popped the question, but the two reportedly hit a speed bump along the way. According to Robert Lacey's book, Battle of the Brothers, Will and Kate reportedly had a fight in 2007 that concluded with the prince dumping his GF over the phone. (Elite Daily previously reached out to reps for the couple for comment on the claim but didn't hear back.) The two reconciled just a few months later, and Will later told ITV News during a November 2010 interview, "things worked out for the better."

Since Cardi B and Offset started dating in February 2017, the couple has broken up and gotten back together not just once, but twice. The first time was in December 2018, not long after TMZ leaked texts reportedly exchanged between Offset and another woman. By January 2019, the two had reconciled, which is why fans were shocked when Cardi filed for divorce in September 2020. But just like the time before, Offset managed to win Cardi back, and by October 2020, the rappers were hooking up again. As Cardi told fans during an IG Live, "It's really hard not to talk to your best friend. And it's really hard to have no d*ck."

Gabrielle Union and Dwyane Wade first met in February 2007 while co-hosting a Super Bowl party, and right away, sparks were flying. The relationship seemed to be going swimmingly until the two unexpectedly called it quits in 2013. During a January 2014 interview with Glamour, Union explained the breakup was due to "distance and scheduling," as their lives had become too hectic to spend time together, but it wasn't long before Union changed her mind. "Over the summer, I reassessed priorities," she added. "I'd always wanted an awesome career with back-to-back projects, but I realized I wasn't willing to sacrifice my relationship for it." The couple reunited and got engaged in December 2013.

Billy Porter and Adam Smith's romance began at a mutual friend's dinner party in February 2009, and while they started dating right away, things fizzled out after a year. "We were both sorting things out," Porter told People during a January 2017 interview. "The first time we were dating, we were just, like, 'hanging out,' and all of a sudden, we realized, 'Oh, it's been seven months; that's more than just hanging out!' But because we weren't conscious of it, it kind of imploded." The two stayed friends, but it wasn't until 2015 that they gave their love a second try.

Five years after an awkward meet-and-greet interaction, Justin Bieber and Hailey Baldwin sparked dating rumors in 2014, but it wasn't until February 2016 that they confirmed their romance... kind of. However, by that summer, Bieber was reportedly dating Sofia Richie, and he and Baldwin didn't talk for a year and a half. "We went through a long period of time when we weren't friends," she told The Times UK in May 2018, soon after Bieber and Selena Gomez split for good. "We didn't speak for quite some time and there was a lot of weirdness that went on. We've moved past that." Baldwin and Bieber became more-than-friends again in June 2018, and the rest is history.

Soon after breaking off his engagement with Perrie Edwards, Zayn Malik and Gigi Hadid crossed paths for the first time at a Victoria's Secret after-party in November 2015, and like Cardi and Offset, Zigi has had lots of ups and downs. Their first breakup occurred in March 2018, and the two announced the split with cryptic statements on Twitter. Just weeks later, Malik and Hadid were spotted smooching, and fans thought they were back on... until Hadid started dating Tyler Cameron in August 2019. However, her relationship with Cameron was short-lived, and Zigi was a thing once again by late 2019.

Chrissy Teigen and John Legend first met on the set of Legend's music video for "Stereo" in 2006, and not long after they officially became a couple, she joined him on tour. Unfortunately, things didn't exactly go as planned. While on tour, Legend got sick, and he broke up with Teigen — or, at least, he tried to. "He was feeling really bummed and stressed out," she told Cosmopolitan in November 2016. "He was like, 'I can't be in a relationship right now.' That lasted for one day. Literally, a day." Legend later told The Guardian in September 2017 they "were dating again less than half an hour later."

After meeting at a Golden Globes after-party in January 2016, Katy Perry and Orlando Bloom's relationship blossomed, but after a year of dating, reps for the couple confirmed they were "taking respectful, loving space" from each other. That split lasted until August 2017, when the two were spotted at a concert together. During a June 2020 appearance on Q on CBC in June 2020, Perry spoke about how painful the breakup had been. "My career was on this trajectory when it was going up, up, and up, and then I had the smallest shift, not that huge from an outside perspective. But for me, it was seismic," she said of the split. "I had given so much out, and it literally broke me in half."

Hilary Duff and Matthew Koma first met while collaborating on her 2015 album, though they didn't make their debut as a couple until January 2017. Breakup rumors started circulating in March 2017, but by October of that year, Duff confirmed they were giving things another try... again. During an December 2017 appearance on The Talk, Duff joked, "It's going so great. I mean, this is the third time that we've dated..." It's unclear when that second breakup took place, but it is clear these two are going strong.

After Nico Tortorella and Bethany C. Meyers met in college, it took years for them to DTR. In their 2019 memoir Space Between: Explorations of Love, Sex, and Fluidity, Tortorella (who uses non-binary pronouns, as does Meyers) opened up about the time they spent apart and what brought them back together. According to Tortorella, Meyers reached out after they became pregnant by another partner. "It had been years since we were this intimate," Tortorella wrote. "It solidified our forever quality — that no matter what had happened in our separate individual lives, no matter what had transpired in the time lost, no matter how much we did or didn't talk, we showed up. We honored. We celebrated." And eventually, they married.

Chance The Rapper and Kirsten Corley have known each other since they were kids, though they didn't start dating until 2013. Things got complicated in February 2016 — just five months after the couple welcomed their first child together — when Corley filed legal documents asking Chance to pay child support, as they were reportedly no longer living together. The court dispute continued for a year until the two reportedly settled out of court, though it's still unclear what exactly happened. By July 2018, the couple was engaged, and all was well.

Adam Levine and Behati Prinsloo were first introduced in 2012 by a mutual friend when the Maroon 5 frontman was looking for a model who'd be willing to pull off some stunts in a music video. Though Prinsloo didn't end up doing the video, the two started chatting over email and eventually began dating — that is, until Levine began seeing Nina Agdal in May 2013. As Prinsloo explained during a January 2019 Porter interview, "We broke up for two months, realized that it was the worst decision, then got back together, got engaged, and got married. It was a wild ride!"

Though it's unclear how Debby Ryan and Josh Dun first met, it was clear something was going on when they became IG official in September 2013. They made their first red carpet appearance in March 2014, but at some point, the two took a break, as Ryan informed a fan she was "single and not tryna mingle" in March 2015. By June 2018, a sappy IG post confirmed they were back on, and Ryan opened up about their reconciliation during an August 2018 interview with Sydney Morning Herald. "We've evolved and grown so much in our careers, in the relationship, as people since we first met," she said. "It's cool and special to have that support system and we are each other's biggest fans."