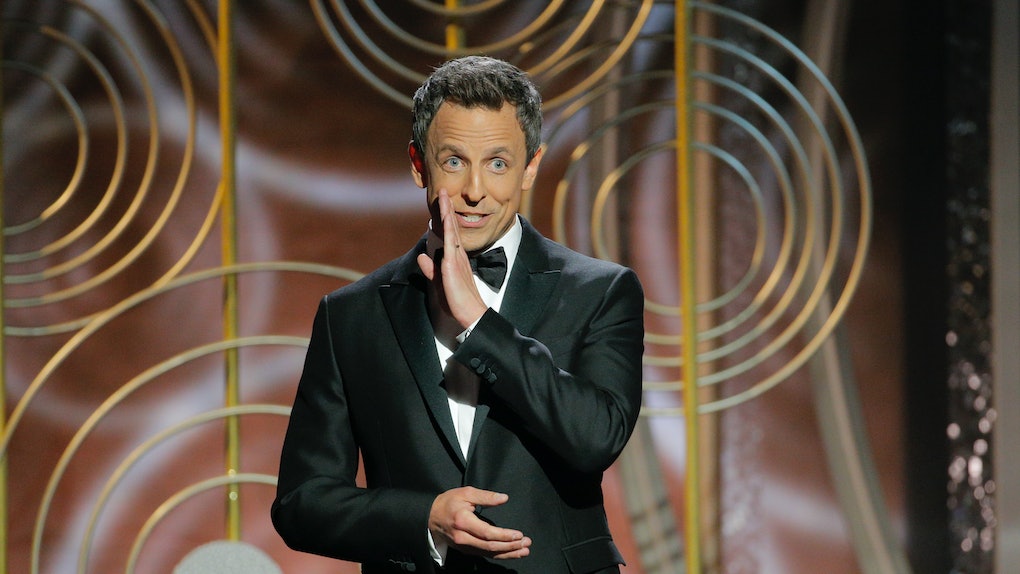 The 2018 Golden Globes were bound to be, well, just a little bit awkward — but also, hopefully, very empowering. Hollywood was shaken to its core this fall with the extensive reporting about alleged decades of sexual harassment from super-producer Harvey Weinstein, who was a titan in the industry. (Weinstein has largely denied allegations of assault and rape and has apologized for bad behavior.) This led to a domino effect of allegations across the film and TV world, creating a reckoning with women demanding better treatment in their work. So it was only fitting that sexual harassment was a major theme throughout the awards show, and the quotes from the Golden Globes about sexual harassment in Hollywood were so moving.

The talk started on the red carpet, where the stars showed up wearing black and Time's Up pins in protest of harassment and sexism. Meanwhile, several celebrities — Emma Watson, Laura Dern, Shailene Woodley, Emma Stone, Amy Poehler, and Michelle Williams — walked the carpet with activists — Marai Larasi, Monica Ramirez, Calina Lawrence, Billie Jean King, Saru Jayaraman, and Tarana Burke. Many women spoke up about the situation — and Debra Messing called out E! for reportedly paying former E! host Catt Sadler less than her male counterpart — but many viewers were frustrated to notice that the carpet hosts were not asking men about it as much as they were asking women.

But once the awards show proper started, at least one man was willing to speak up: Seth Meyers.

Meyers was the host of the Golden Globes, and he knew it was a high-pressure job this year, especially.

"Good evening, ladies and remaining gentlemen," he said to open his monologue at the start of the show. Meyers went on to say,

For the male nominees in the room tonight, this is the first time in three months it won’t be terrifying to hear your name read out loud. ‘Did you hear about Willem Defoe?’ ‘Dear God, no.’ ‘He was nominated.’ ‘Don’t do that!’

Considering what’s going on this year with powerful men and their terrible behavior Hollywood, a lot of people thought it would be more appropriate for a woman to host these awards, and they may be right. But if it’s any consolation, I’m a man with absolutely no power in Hollywood. I’m not even the most powerful Seth in the room tonight.

Meyers also directly referred to Weinstein, calling him "the elephant not in the room." "Don’t worry, he’ll be back in 20 years when he’s the first person booed during the 'In Memoriam' segment," Meyers cracked.

As the show went on, many award winners talked movingly about gender inequality and sexual harassment.

Nicole Kidman was among the first to speak up as she accepted an award for her acting in Big Little Lies.

After speaking to the "power of women" that led to the creation of Big Little Lies, which was led by women both behind and in front of the camera, Kidman also thanked her mother, explaining that she was "an advocate for the women's movement when I was growing up."

It was especially powerful as Kidman's character in Big Little Lies was a survivor of ongoing domestic abuse.

"This character that I played represents something that is the center of our conversation right now: abuse," Kidman said. "I do believe, and I hope, we can elicit change through the stories we tell and how we tell them. Let's keep the conversation going."

Dern talked about her Big Little Lies character, who was dealing with her young daughter being violently bullied at school. She spoke about how girls are taught to be silent in the face of abuse, and how we need to change that within our culture.

I urge all of us to not only support survivors and bystanders who are brave enough to tell their truth, but to promote restorative justice. May we also, please, protect and employee them. May we teach our children that speaking out without fear of retribution is our culture's new north star.

Not to be outdone, Reese Witherspoon spoke up during her speech while accepting an award for the show overall. She called the women who spoke up about abuse "so brave," and said she hopes Big Little Lies and other shows like it help more stories to be told.

"We see you, we hear you, and we will tell your stories," Witherspoon vowed.

Naturally, Oprah Winfrey was there to inspire us all and give us tons of chills.

In accepting the Cecil B. DeMille Award for general greatness, Winfrey declared that the time is up for men taking advantage of their power. She said,

I want all the girls watching here now to know that a new day is on the horizon! And when that new day finally dawns, it will be because of a lot of magnificent women, many of whom are right here in this room tonight, and some pretty phenomenal men fighting to be sure that they are fighting to take us to a time when we will never have to say 'Me too' again.

There were several one-liners dropped about gender inequality in Hollywood as well.

This included Andy Samberg saying, with a shrug, "What are you going to do, it's a weird year," when a presentation joke awkwardly flopped.

Meyers did a little joke reel where he set up a joke, and an actor in the audience dropped the punch line. This included one joke about Call Me By Your Name, which Meyers described as a coming-of-age story with a romance between an older and younger man. Billy Eichner dropped the punch-line: "Said Kevin Spacey, 'You lose me at 'of age.''" (Spacey was accused of targeting underage boys as a man, and he said in a statement that he apologized if those events happened.)

Natalie Portman, too, got in on the fun. While presenting the nominees for Best Director, she said with a smirk, "And here all the all-male nominees." Similarly, Chris Hemsworth and Jessica Chastain joked that they took all the men out of the Best Actress category.

Dern and Kidman's acceptance speeches highlighted something missing from their male co-star's speech — and from many other men's speeches.

Just like on the red carpet, while the female award winners were quick to speak up about sexual harassment, the men were very quiet on it. Instead, they gave very typical acceptance speeches, avoiding even coming close to the topic. The pins are cool, guys, but do better next year.

More like this
These Songs About Friendship Between Women Are Empowering AF
By Sydney N. Sweeney
These BTS Suga Quotes For Instagram Captions Are Pure Poetry
By Brandy Robidoux
Lil Nas X's Quotes About Alienating Straight Fans With "Montero" Are All About Authenticity
By Brandy Robidoux
Stay up to date