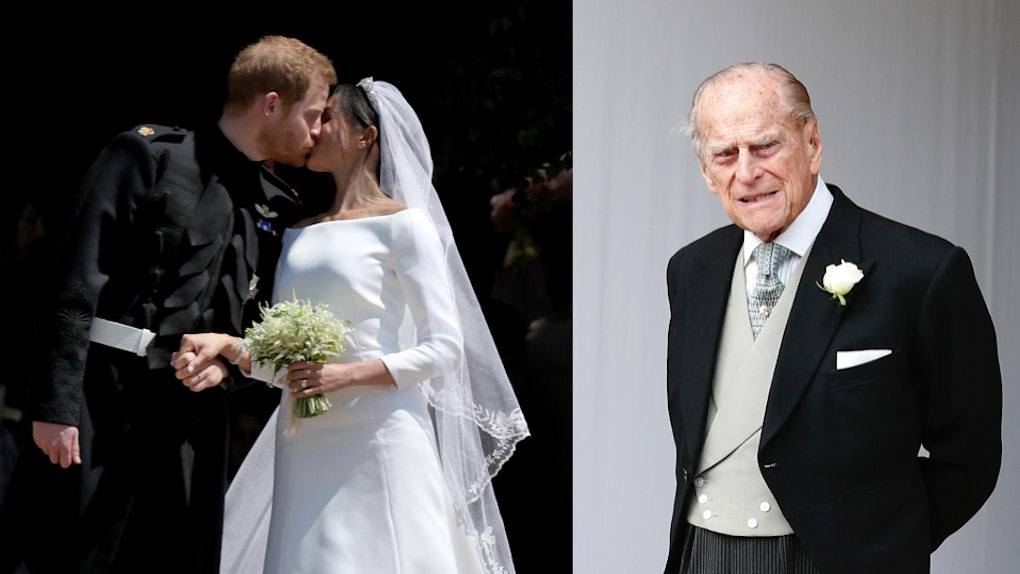 Finding the love of your life is hard enough. And depending on the circumstances, getting your family's wholehearted approval can be even trickier. Prince Philip's reported quote about Prince Harry not marrying Meghan Markle proves exactly how tough it can be to win over your loved ones.

According to a June 16 story from the UK's Sunday Times, quoted by Page Six, Philip reportedly told his grandson, "one steps out with actresses, one doesn't marry them." (A rep for the royal family declined to comment on the remark to Elite Daily.) The Sunday Times claims that Philip made the comment as his grandson's relationship with the Suits actress and philanthropist was growing more serious.

Harry and Meghan were initially introduced through a mutual friend in July 2016, announced their engagement in November 2017, married in May 2018, and welcomed their first child, a son named Archie Harrison Mountbatten-Windsor, on May 6, 2019. So, even if Harry's grandfather wasn't thrilled by their relationship, the reported comment clearly didn't slow the Duke and Duchess of Sussex's roll toward living happily ever after. In the 13 months since their wedding day, the newlyweds conducted a royal tour of Australia, New Zealand, Fiji, and the Kingdom of Tonga, moved into their own home (Frogmore Cottage on the grounds of Windsor Castle, the site of their wedding), and supported causes ranging from mental health to The Invictus Games.

While Philip may have reportedly disapproved of Harry's choice of partner, his wife, Queen Elizabeth II, appears to have been on board. In March 2018, she formally gave consent for Harry to marry Meghan.

She issued a statement that proclaimed:

Whereas Her Majesty in Council was this day pleased, in pursuance of the provisions of an Act entitled Succession to the Crown Act 2013, to declare Her Consent to a Contract of Matrimony between Prince Henry Charles Albert David of Wales, K.C.V.O., and Rachel Meghan Markle, which Consent Her Majesty has caused to be signified under the Great Seal.

Translation? A 1772 law called the Royal Marriages Act dictated that every member of the British royal family had to have their marriage approved by the monarch; if a descendent of the king or queen didn't get consent, the marriage would be considered illegitimate. But in 2013, that law was replaced by the Succession to the Crown Act, which only requires the first six people in line for the throne to need approval before tying the knot. At the time of Harry and Meghan's engagement, Harry was sixth in line, which is why he needed his grandmother's permission.

Prince Charles seems particularly fond of his newest daughter-in-law. He walked her halfway down the aisle at her wedding when her own father, Thomas Markle, wasn't able to attend, reportedly due to heart issues. In a 2018 BBC One documentary called Prince, Son and Heir: Charles at 70, Harry said his father was happy to accompany Meghan. “I asked him to and I think he knew it was coming," Harry recalled in the documentary, "and he immediately said, ‘Yes, of course, I’ll do whatever Meghan needs and I’m here to support you.’"

Charles reportedly even has a unique nickname for Meghan, according to The Daily Mail. A source told the publication he calls her Tungsten, after the "strong and unbending" metal. "Prince Charles admires Meghan for her strength and the backbone she gives Harry, who needs a tungsten-type figure in his life as he can be a bit of a softy," the source reportedly said. "It's become a source of endearment."

That tungsten-style strength will sure come in handy if the reports of Philip's comments are rooted in any truth. But regardless of how Philip feels, it's clear that the royal family as a whole has so much love and support for the Duke and Duchess of Sussex, particularly as they embark on their newest adventure as parents.