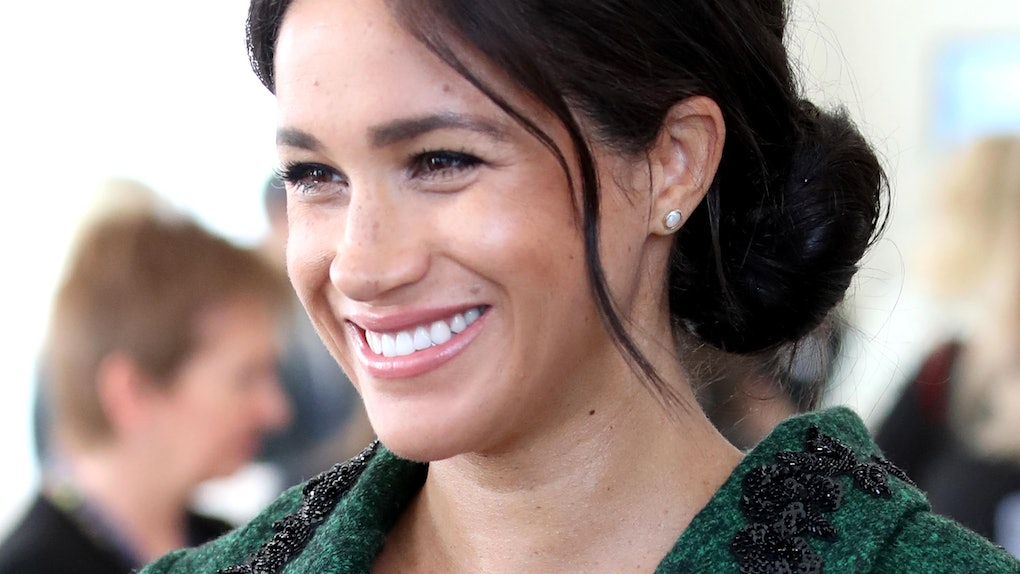 The royal baby is here! Meghan Markle, according to Kensington Palace, gave birth to her and Prince Harry's first child on May 6 — a baby boy. While they kept the name under wraps for a few days, on May 8 Meghan Markle and Prince Harry announced that they had named their baby Archie Harrison Mountbatten-Windsor. How sweet! And also, how fittingly traditional. So what is the meaning of Meghan Markle's baby's name? It's steeped in tradition, just like all of the English royal baby names.

The meaning of the name Archie, according to Babble.com, is "genuine and bold". You hear that? That's the sound my heart melting. Little baby Archie now joins the ranks of his other royal cousins, Prince George, Princess Charlotte, and Prince Louis. According to Town & Country, however, the baby won't automatically get a Prince title like his father, cousins, and uncle. Their last name is Mountbatten-Windsor, just like their father and uncle, but he doesn't automatically carry the title of Prince because his father is not the first in line for the throne. The titles of princess/prince are reserved for the children of the eldest son of the monarch, according to the Letters Patent Queen Elizabeth issued in December 2012.

Also on May 8, the family announced that unlike his cousins, little Archie would not be getting a title. Though he is entitled to use a courtesy title pulled from Prince Harry's Scottish title Earl of Dumbarton, apparently, Meghan and Harry declined. Instead, the royal baby will be simply, "Master Archie."

Kensington Palace announced the arrival of baby Archie on May 6.

The happy statement read, "Her Royal Highness The Duchess of Sussex was safely delivered of a son at 0526hrs. The baby weighs 7lbs 3oz and The Duke of Sussex was present for the birth." His name was announced two days later, on May 8.

The Instagram statement read, "We are pleased to announce that Their Royal Highnesses The Duke and Duchess of Sussex welcomed their firstborn child in the early morning on May 6th, 2019. Their Royal Highnesses’ son weighs 7lbs. 3oz. The Duchess and baby are both healthy and well, and the couple thank members of the public for their shared excitement and support during this very special time in their lives. More details will be shared in the forthcoming days."

People on Twitter are so happy for Meghan and Harry and their new bundle of joy. And the general consensus on the name is that it's cute and very fitting for a royal.

The Duchess of Sussex's pregnancy was originally announced on Oct. 15, 2018.

The tweet from Kensington Palace announcing the happy news said,

Congratulations, Meghan and Harry! You're parents!