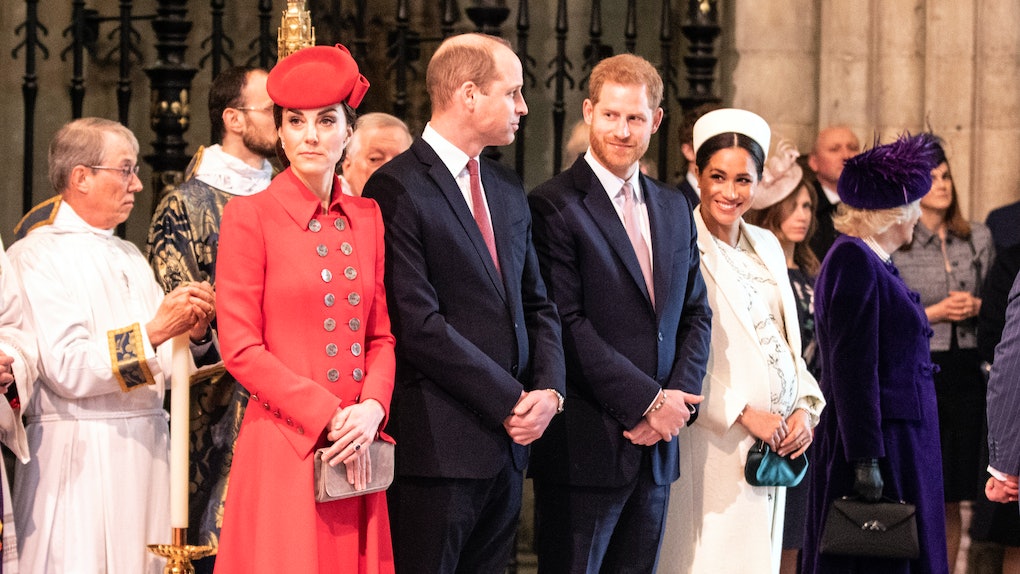 If you're here looking for royal family drama, please move along because I only have wholesome content to report today. William and Kate reportedly visited Meghan and Henry at Frogmore Cottage, the Duke and Duchess of Sussex's new residence, for the first time last week — so anyone who thinks there's anything unsavory going on between the families can just put it to rest. There's truly nothing that screams "everything is normal and fine between us" than one couple visiting another's home.

According to Harper's Bazaar, Megan Markle and Prince Harry recently welcomed Kate Middleton and Prince William into their newly renovated home as the couple prepares for the arrival of a royal baby any day now. Meghan and Harry moved into their Windsor home, called Frogmore Cottage, a few weeks ago to get ready for the baby. After Easter services on Sunday, April 21 at Windsor Castle, Kate Middleton and Prince William reportedly visited Frogmore Cottage, which is also located on the Windsor Castle grounds, for the first time since the renovation. Meghan didn't attend Easter services this year due to the fact that, you know, she's extremely pregnant and might have her baby at any second, so the couples apparently spent the holiday afternoon together, per the publication. Reports of this get-together should help put to rest all those feud rumors.

First, is the rumor that Harry and William are feuding. Elite Daily previously reached out to Kensington Palace for comment on the status of Prince William and Prince Harry's relationship, but they declined to comment. According to various reports, these current rumors date all the way back to older rumors that Markle and Middleton were feuding for an extended period of time. Elite Daily previously reached out on the reported feud, but did not hear back at the time of publication.

Dickie Arbiter, the Queen's former press secretary, told Us Weekly that there was no feud between anyone. Explaining the move and split of the royal households, Arbiter told the mag:

Harry has decided that he wants to set up his own office, which is fair enough. While he was single, he was living in his comfort zone with his brother and his sister-in-law. But now he’s married, he’s creating his own comfort zone, with his wife, and it just makes sense. You can’t have a small staff running the offices of two people. Harry is now moving on and setting up his own office. Nothing unusual in that.

If anything, Kate and William's visit to Frogmore Cottage on Easter just goes to show that things are just fine within the British monarchy. If you were here looking for drama, sorry to disappoint! But if you're on team #RoyalFamilyThriving, you're welcome.

Speaking of the British monarchy, if you're following along you probably know that the royal family is about to increase in size any day now. Back in October 2018, Kensington Palace publicly confirmed that Markle was pregnant, placing her due date in the spring of 2019. Though not a ton of information is known about the baby, plenty of outlets are speculating about the baby's gender, location where the baby will be born, the kind of birth Markle is planning to have, the baby's name, and whether the parents will apply for a dual citizenship with the U.S. and UK for the baby.

Hopefully all the speculation can be put to rest and the world can get some actual information when Markle gives birth soon. For now, it's great that Meghan and Harry have been able to maintain some much-needed privacy and have been to spend time with family in their new residence.