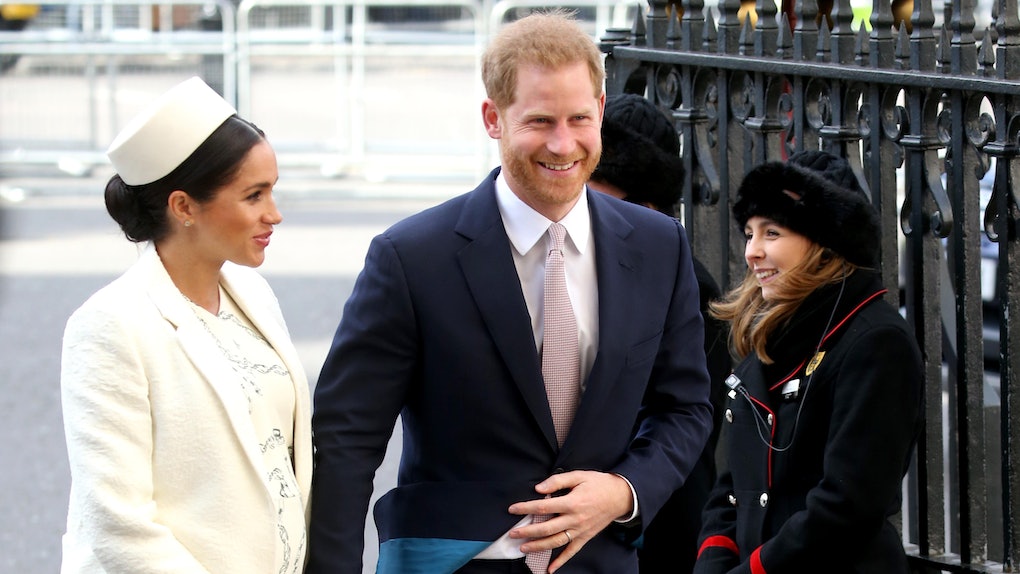 It's a boy! Meghan Markle welcomed a son in the early hours of May 6, and mother and baby are both doing well. We still have to wait a few days before we see the new bundle of joy in photos or hear about a name, but his dad is already gushing about him to the world. Prince Harry's reaction to the birth of his son will give you serious dad vibes, and we can't wait to see the family of three together.

ICYMI (but, TBH, how could you have?), Meghan gave birth to Baby Sussex on Monday, May 6, at 5:26 a.m. in Windsor, England. Several hours after his arrival, the royal family's website confirmed the birth in a statement revealing that Meghan's mother, Doria Ragland, was with the Sussex trio at their home of Frogmore Cottage. Harry and Meghan's staff released a slightly different statement on their Instagram page, writing, "The Duchess and baby are both healthy and well, and the couple thank members of the public for their shared excitement and support during this very special time in their lives. More details will be shared in the forthcoming days."

Given the couple's emphasis on welcoming their child privately, fans weren't expecting to see either of them until they release photos of themselves with their son in a few days. New dad Prince Harry then surprised worldwide followers when he met with press outside the Sussex home to discuss the news. If that video of him with a girl trying to steal his popcorn made your ovaries explode, get ready for his full-on dad mood in this clip.

"I'm very excited to announce that Meghan and myself had a baby boy earlier this morning," Harry told a reporter. "A very healthy boy. Mother and baby are doing incredibly well. It's been the most amazing experience I could ever have possibly imagined. How any woman does what they do is beyond comprehension."

I never knew I needed Prince Harry praising women for experiencing childbirth, but lo and behold, I'm liking this.

In between showing off his dad glow-up, Harry revealed that he and Meghan are still discussing a name for their son. "The baby's a little bit overdue, so we've had a little bit of time to think about it," he said. "That's the next bit... I think we'll be seeing you guys in probably two days' time as planned, as a family, to be able to share it with you guys and so everyone can see the baby."

Mark your calendars for Wednesday, guys! It looks like we're getting a name announcement and family photos to squeal over soon. In the meantime, check out Harry raving about his son's birth even more.

"It was amazing, absolutely incredible," he told press. "As I've said, I'm so incredibly proud of my wife. As every father and parent would ever say, your baby is absolutely amazing, but this little thing is absolutely to die for. So I'm just over the moon."

Awww. Everyone knew Prince Harry would adore being a father, but it turns out that the real thing is even better than we imagined. Congratulations to him and Meghan!