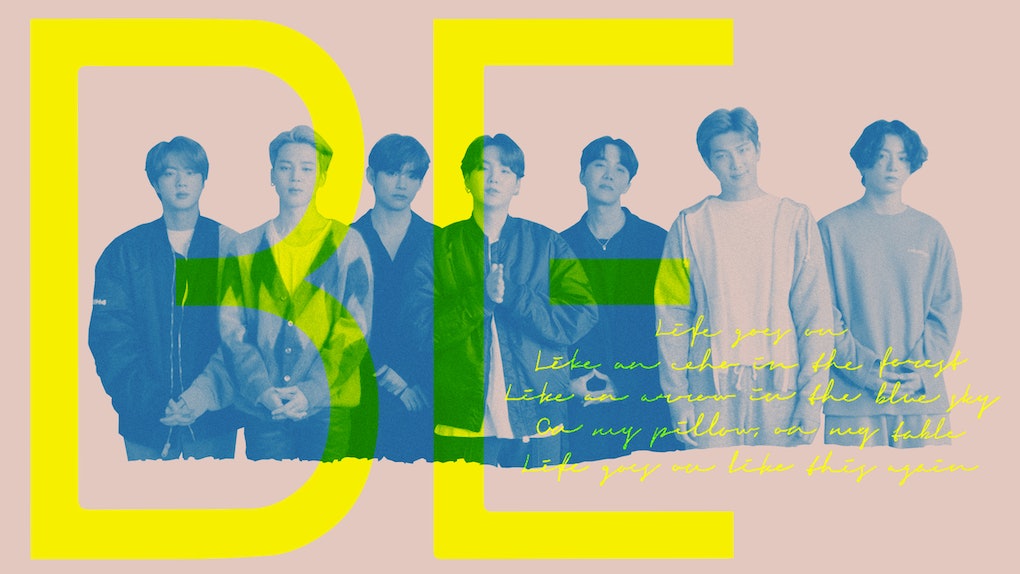 BTS has written so many songs with their fans in mind, like "Magic Shop," "Mikrokosmos," and "We Are Bulletproof: The Eternal," just to name a few. Now, they've added more tracks onto that list because their latest record, BE, which dropped on Nov. 20, is a tribute to everyone who has supported them all these years. BTS' lyrics about ARMY on their BE album are so sweet and serve as another reminder the group doesn't take their fans for granted.

In the months leading up to the project's release, BTS explained they created BE as a way to give ARMYs hope during these difficult and uncertain times due to the coronavirus pandemic. To give fans a taste of what they could expect, the group dropped "Dynamite" on Aug. 21. The single successfully lifted everyone's spirits up, especially with BTS' performances of the song on various award shows and television programs.

ARMYs were happy to see "Dynamite" go No. 1 on the Hot 100, and when they discovered BE would include a skit of BTS' conversation about the achievement, they knew this album was going to be so special. Now that they've listened to the record in full, they're even more emotional after finding out the guys wrote several lyrics about them. Listen to BTS' BE album below.

BTS' lead single off BE, "Life Goes On," is an ode to ARMYs encouraging them to be strong and expressing hope a change will soon come.

In the second verse, RM says:

Then, in the pre-chorus, V, Jungkook, and Jin tell fans they're not alone because they'll get through this situation together with them.

Close your eyes for a moment / Hold my hand / To the future, let's run away

Suga's verse is seemingly about how BTS and ARMYs will stay connected no matter what.

"Fly To My Room" is about the feeling of loneliness one feels while stuck in quarantine. BTS wishes for things to go back to the way they were before the pandemic, singing:

The "everything" BTS may be talking about is their Map of the Soul tour, which was postponed due to the pandemic, forcing them to be apart from ARMYs. V and Jimin express this sudden change in the second verse.

Suga and J-Hope's part also seems to be about missing ARMYs.

Somehow there's no joy, no sadness, no emotion/ It's just me here

The chorus of "Blue and Grey" will hit ARMYs hard because it's about BTS performing in front of no audience.

My hands have reached out countless times / Colorless echo / Oh, this ground feels so heavier / I am singing by myself / I just wanna be happier

The second verse by J-Hope and RM talks about "grey facial expressions," which seem to also hint at looking at an empty arena with no ARMYs in sight.

"Telepathy" is basically BTS' love letter to ARMYs. In the intro, they tell fans:

Every time during the same day / I feel the happiest when I meet you / Every time, even in a different everyday life/ You're the most special person to me

Although BTS and ARMYs can't see each other live in concert, nothing has changed between them.

Even though we're far away now / Our hearts are still the same / Even if you're not by my side, yeah

Meanwhile, in "Dis-ease," BTS sings about how all their 2020 plans were canceled, including their tour and seeing fans all over the world.

Uh, it looks like I lost something / I relieve anxiety with a sip of coffee

"Stay" appears to be about BTS and ARMYs never leaving each other's sides.

Our heart beats are louder than ever/ No matter where we are right now. Together, wherever yeah

Finally, BTS released "Dynamite" in hopes that it will cheer ARMYs up during these difficult times. While no specific lyric seems to be about fans, the whole song was written with ARMYs in mind as a reminder to celebrate the little moments in life.

Based on all these lyrics about fans, BTS and ARMYs' love for each other is the real deal.

More like this
Taylor Swift's 'Fearless (Taylor's Version)' Lyric Changes Are Small, But Meaningful
By Michele Mendez
Demi Lovato & Ariana Grande's "Met Him Last Night" Lyrics Focus On Toxic Love
By Brandy Robidoux
What Do BTS' "Film Out" Lyrics Mean In English? They're About A Past Relationship
By Michele Mendez
Stay up to date