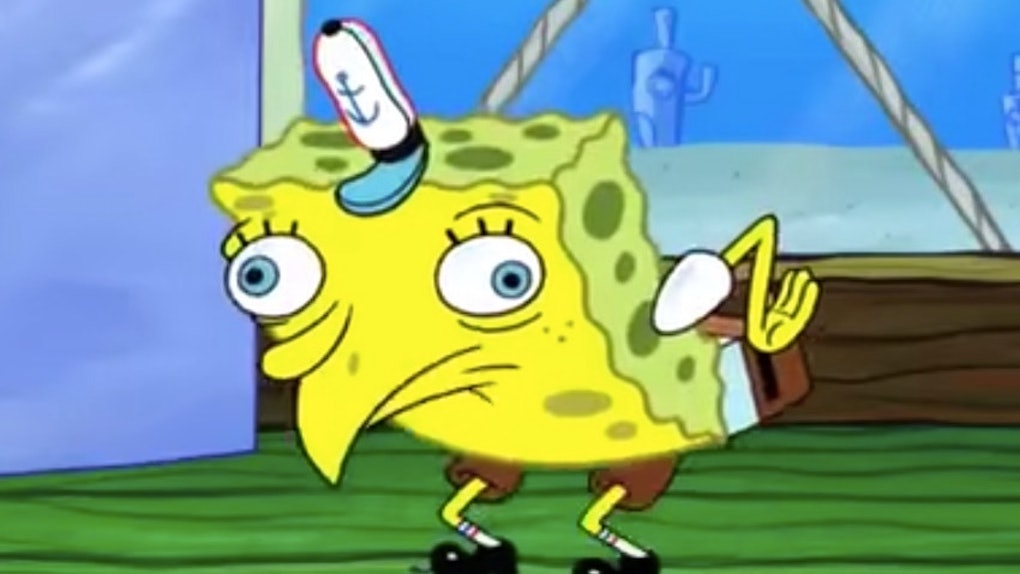 2017 In Memes, Because This Year Was A Wild Ride & You Could Use A Laugh

You guys, we made it. The slog that was the year of 2017 is finally coming to a close. I'm not sure if it's possible, but it truly feels like five years of WTF moments somehow crammed themselves into the past 12 months. The long haul is almost over, though, and 2018 is just around the corner. Before you bid adieu to this past year, take a moment to relive 2017 in memes — because this year was definitely one for the books and you could probably use a laugh.

After a contentious U.S. presidential election in 2016, politics were on everybody's mind. Unfortunately, the political climate felt about as divisive as it could get (at the time), and the mere mention of one political party or another could set off heated debates and yelling matches. As 2017 unfolded, engaging in a conversation involving politics became akin to navigating a minefield.

As Americans rang in 2017 awaiting the inauguration of then-president-elect Donald Trump, the internet gave them something with which to pass the time. Need I remind you of the beautiful gift that was the Obama-Biden memes that flooded your feeds in January 2017?

This meme about the presidential transition is all too accurate. I feel you, Joe, I feel you.

If you've lived through all of 2017 without encountering Salt Bae, who seasons his customers' entrées with flare, then I'm not sure what you were doing. The meme was everywhere, and illustrated people feeling fancy AF.

The video in this meme is actually from 2013, and the man is Drew Scanlon, according to Buzzfeed News. Scanlon's expression came from his work on a web series video about video games. The clip of Scanlon became widely used in memes in February. His bewildered expression was fitting for many a meme — and pretty much for everything that happened in 2017.

This meme took over Twitter in the summer of 2017 after the discovery of this made-for-a-meme stock photo of a man checking out another woman while holding his girlfriend's hand. People began adding different labels to each person in the photo, and soon enough, the memes were revealing what people really want (like dogs, duh).

March 2017 saw the American people looking toward the future. The following meme was posted by a far-right Twitter user (whose account is now suspended) that used the image of a woman wearing a niqab and a man in drag sitting next to each other on the subway with the caption, "This is the future liberals want." Presumably, they viewed this as a negative (looks great to me!). Many others found this to be, in fact, quite a desirable future, and they had other suggestions as well...

Twitter user @darth replied to the original (and offensive) meme with a meme that brought smiles to dog-lovers everywhere. Honestly, if 2018 looks like both of the photos above, that would be splendid.

The image in this meme is from a 2015 UK YouTube series called #HoodDocumentary, and the character is Reece "Roll Safe" Simpson (played by Kayode Ewumi) who is "a hustler with no hustle," according to Fader. It showed up as a meme everywhere in 2017 to illustrate the best way to explain away your terrible decisions. For instance, this past year required a lot of retail therapy.

Mocking SpongeBob is just what it sounds like. Someone repeats what you say verbatim, but they do it in the cadence of your AIM Away Message from 2000. The memes were everywhere, and TBH, I hear the Netflix message that way in my head every the time.

Just as the highly-anticipated iPhone X was released on Nov. 3, 2017, Apple updated to iOS 11.1 and removed the ability to talk about yourself on your iPhone. The "i" glitch that meant when you went to type "i" you would instead see "A" and question mark with a box around it. As soon as people stopped being annoyed AF at the glitch, some pretty great memes came out of it. The Whitney Houston remix is my personal favorite.

This meme gained a lot of popularity after President Trump took office in the beginning of 2017. From Trump instituting a travel ban to championing the GOP tax plan that will give major cuts to the wealthy (and all the crazy in between), many Americans were definitely feeling worse from the wear. They responded by posting images of their fresh, young selves entering 2017 contrasted by beaten-down, wary versions of their current selves. To illustrate it best, they used different images from pop culture (see: the Cynthia doll from Rugrats).

It's been quite a year, to say the least. It wasn't all bad, though. The Women's March took place in January, and with 3.3 million participants, it was called the largest demonstration in U.S. history. Also, you got to experience the first total solar eclipse in 38 years, and the next one won't happen until April 2024.

I'm sure you each had many other personal highlights throughout the year, but if you start to dwell on the negatives, you can always come back to these popular 2017 memes and get your laughs back on track for the new year.