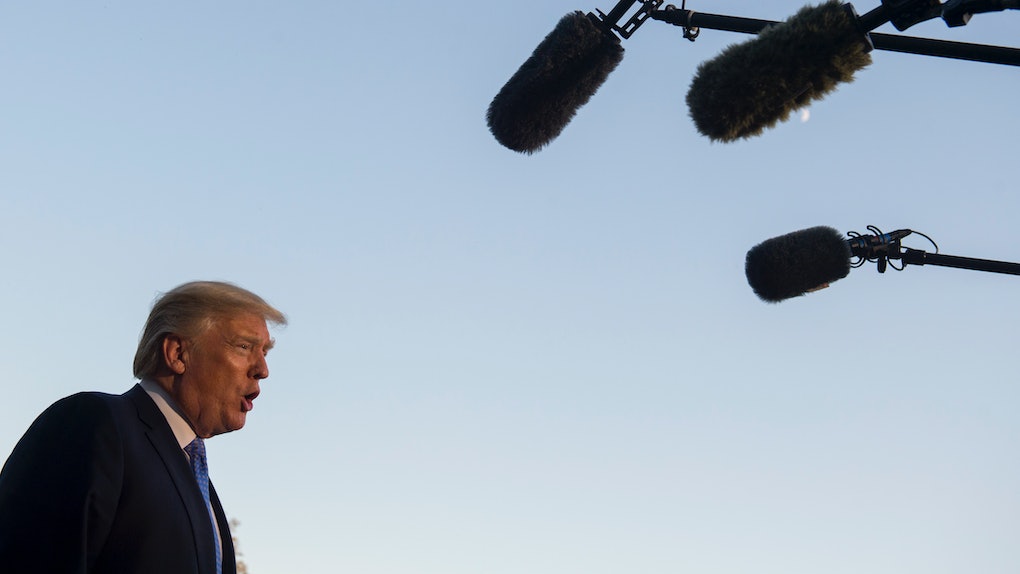 Does Trump's Tax Plan Save Everyone Money? People Are Calling Out Bad Math On It

Donald Trump has been talking taxes for as long as we all can remember, but now his plan appears to be on its way to realization. Since the president unveiled his plan to overhaul the nation's tax code on Sept. 27, the White House has been promoting the plan nonstop. But on social media, people are calling bad math on Trump's tax plan.

On Sunday, White House Press Secretary Sarah Huckabee Sanders tweeted in support of the tax plan, citing the oft-touted figure that average Americans would receive $4,000 as a benefit of the plan. She wrote,

The average American family would get a $4,000 raise under the President’s tax cut plan. So how could any member of Congress be against it?

She also solicited citizens' plans for how they'd spend the hypothetical $4,000 Trump has promised coming to American families.

While $4,000 is the magic number Sanders and Trump have been clinging to in defending the tax plan, it's a bit misleading. Per CNN, the $4,000 figure refers to an average that a person making $50,000 would get over 8 years, and that amount is essentially making up for lost raises that employees haven't been getting when corporations see increased profits.

Multiple Twitter users have been pointing out what they're calling faulty math. One tweet, by Franklin Leonard, the founder of moviemaking social network The Black List, was going viral on Monday. He quoted Sanders' tweet and said,

If I give 10 apples to one person and no apples to nine people, the average person has one apple.

Why are nine people mad at me?

Other users chimed in with their own interpretations of the math.

Congress members have been outspoken about how they assess the tax plan and its implications for middle-class Americans. It's been generally agreed upon by economic experts since Trump unveiled his tax plan back on Sept. 27 that the overhaul would benefit corporations and top-earning individuals the most. It was unclear exactly what the tax code would mean for the average American, and the Senate's plan clarified some of these points.

Per David Cay Johnston, a source interviewed by Democracy Now!, the tax plan, which eliminates the estate tax, would benefit Trump's family by $800 million. Trump has yet to release his own taxes to the public.

According to an assessment by the Tax Policy Center, Trump's tax plan wouldn't benefit average Americans in the way it's been touted. The plan would save the average middle-income citizen $660 annually, the center reports, and one in seven families would see an increase in their taxes to the tune of $1,000 in 2018. Over the next ten years, one in four families would be seeing a tax increase. The plan, it says, primarily benefits the creme de la creme, the top 10 percent of the top 1 percent — a disparity that widens over time.

The day following Trump's tax plan unveiling, the Wall Street Journal reported that the Treasury Department had taken down a paper from 2012 disproving statements by Secretary Steve Mnuchin that workers would benefit most from corporate income tax cuts.

Last week, the Senate narrowly passed a budget resolution that lays the groundwork for moving forward with the tax plan overhaul. The New York Times reports it's unclear what the overhaul will eventually mean for 401(k) plans, the system that allows workers to save for retirement. Republicans are considering legislation that would place caps on individuals' annual contributions, meaning that workers can only put away $2,400 a year, down from $18,000.

But Trump tweeted early Monday morning promising that there would be no contribution caps, further confusing the issue.

Now all eyes are on the House, which, with a strong Republican majority, is expected to pass the budget resolution as well. Then comes the hard part: rewriting the tax code.