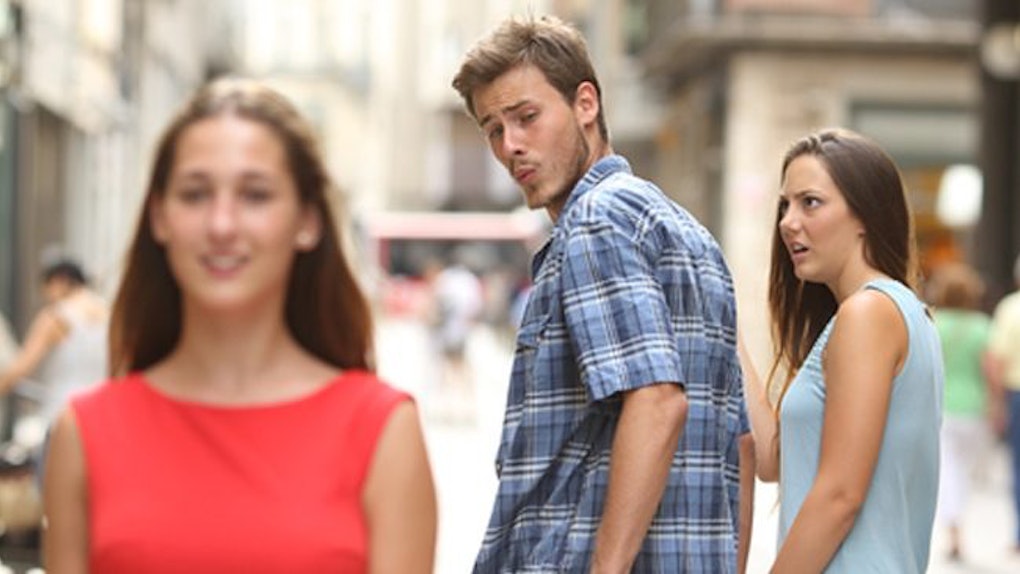 If you've been on Twitter recently, you've probably seen the "disloyal" and "distracted" boyfriend memes circulating. Made using a series of super awkward Shutterstock stock photos — taken by photographer Antonio Guillem — the memes tell a hilarious (albeit kind of sad) relationship tale. In case you missed it, here, let's go through some of the best examples of these viral stock photos turned into memes.

Before we LOL over the internet's witty compilations, we need some backstory. On Shutterstock, Guillem's photos have the following description:

I mean, that description is practically begging to be a meme. Likewise, the photos themselves, when viewed back-to-back, already tell the story Twitter has so beautifully captured and shared.

Traditional stock photos are notorious for their awkward poses, faked expressions, and general not-real-looking nature; however, Guillem's entire "disloyal man" series is too good to ignore.

According to Vox, "Man Looking At Other Woman", as it's called on Know Your Meme, got its start with a tweet from Omar Essam (@n1m161), who used the initial "disloyal man" photo to crack a political joke about millennials. Once people realized there were, indeed, more photos of this bizarre interaction, they added the relationship narrative. And Twitter hasn't been the same since.

"THE CONCLUSION WE'VE ALL BEEN WAITING FOR."

Is it over now?

And another involving ice cream sandwiches.

And another highlighting the realness of a Wikipedia rabbit hole.

And another for all the book worms out there.

One more for a great Happy Hour.

Time to sell? from MemeEconomy

Basically, the "disloyal man" meme has many wonderful uses. But the full story with all the photos (and drama) is particularly entertaining, don't ya think?

Thank you, Antonio Guillem for blessing us with such multi-use photography. I now have the perfect way to express my Pumpkin Spice Latte cravings.