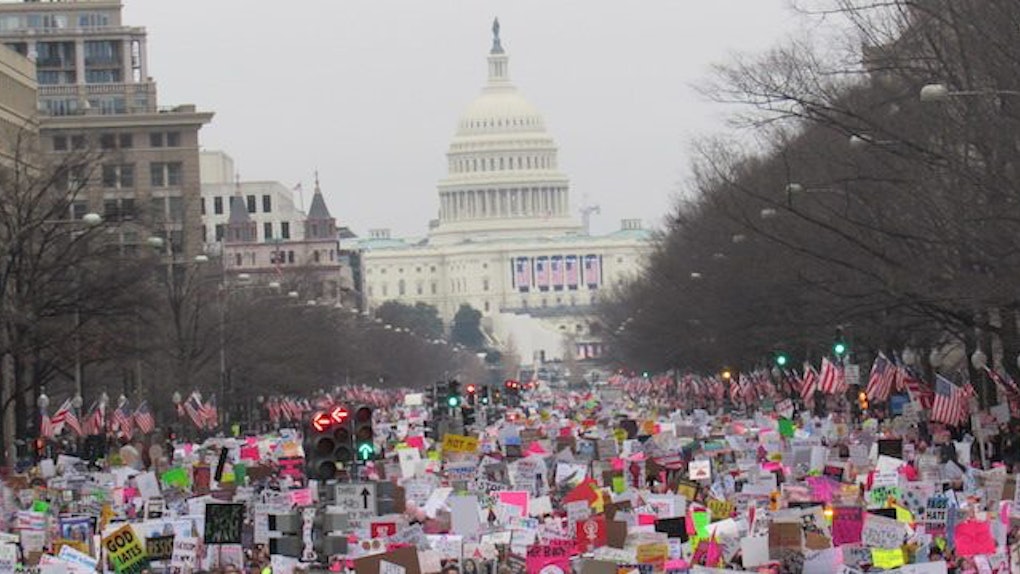 4 Amazing Statistics About The Women's March

But his administration is being criticized for the inaccurate information it's offered on the size of the crowd that attended his inauguration.

Trump is clearly feeling a little insecure about the relatively small number of people who came to the nation's capital to see him sworn in as the 45th president.

Trump's press secretary, Sean Spicer, attacked the media for its coverage of the inauguration, arguing it misrepresented the number of people who attended (it didn't).

Spicer made several false claims during this press conference, including that Trump had “the largest audience to ever witness an inauguration."

Chuck Todd quickly pointed out that there is no such thing as "alternative facts."

Obama's inauguration in 2009 clearly had more people at it than Trump's.

Trump is mobilizing people, just not in the way he wants.

The day after Trump's inauguration, people across the US and around the world marched against Trump, filling the streets of a number of major cities.

Trump is obviously annoyed about this, given that he hates not being number one (and it didn't take very long for him to tweet about it).

The Trump administration is off to a very rough start. This focus on numbers is extremely petty.

But, since Trump and his people insist on it, let's talk about some actual numbers (not alternative facts).

History was made over the course of the weekend, but not in the way President Trump hoped.

Here are four incredible statistics about the Women's March that will drive Trump crazy.

1. At least 3.3 million people participated in the Women's March across the US.

We don't yet have the final numbers for the Women's March, but political scientists believe it may have been the largest demonstration in US history, Vox reports.

Estimates show one out of every 100 Americans participated in the march, which is astonishing.

2. The Women's March on Washington was at least three times bigger than the crowd at Trump's inauguration.

Washington, DC was absolutely flooded with people on January 21 for the Women's March on Washington.

It was truly an incredible day in the nation's capital.

Crowd scientists estimate the Women's March on Washington was roughly three times larger than the number of people who attended Trump's inauguration.

It's estimated somewhere between 500,000 and one million people participated in the march.

Metro had the second busiest day in its history amid the Women's March, recording 1,001,613 station entries on Saturday.

Comparatively (as noted above), there were roughly 570,000 station entries the day of Trump's inauguration.

3. There were zero arrests during the Women's March on Washington, but hundreds on inauguration day.

Over 200 people were arrested on inauguration day in Washington, DC.

Trump's big day was marred by clashes between police and protesters, and several businesses were damaged.

But the day of the Women's March on Washington saw nothing but peace and love: Zero people were arrested in spite of the large size of the crowd.

4. People marched against Trump on all seven continents. Nasty women rule the world.

People across the world marched against Trump and in solidarity with women and America.

In fact, there were marches on all seven continents -- including Antarctica.

He can either face the music, or continue to live in a fantasy world based on "alternative facts."