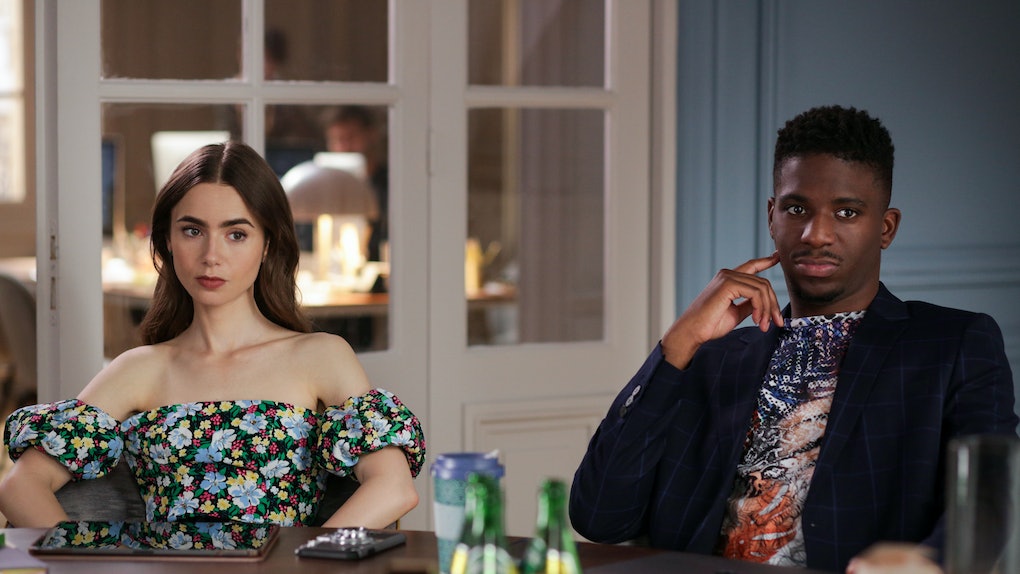 10 Shows Like 'Emily In Paris,' Because You Can't Play It On Repeat Forever

Netflix's hit for the fall of 2020 is the surprisingly easy, breezy Emily in Paris. A coming-of-age dramedy starring Lily Collins, the series follows the titular Emily as she relocates from Chicago to Paris, supposedly to bring an American point of view to an outdated French marketing firm. But instead, she winds up learning a lot about French culture and shedding her Midwestern innocence. But Emily in Paris isn't the only show dedicated to telling the story of women coming into competitive industries. These shows like Emily in Paris are great follow-ups for those looking for more.

And then there's her actual job, the impetus for Emily being in Paris in the first place. Emily's career takes off — as does, confusingly, her Instagram presence — forcing her to balance a more traditional career path in marketing with the influencer brand world of the 21st century. It's a lot of fun, but it's also a lot of drama. In short, any show that takes its place in your watchlist needs to bring a lot to the table. Here are a few good contenders:

Before Emily in Paris, creator Darren Star was famous for several shows starring teen-and-20-something-aged characters. But the best known was his take on four single gals in their 30s in New York, with HBO's mega-hit Sex & The City, based on Candace Bushnell's book of the same name. There's a reason everyone compares EIP to SATC, and fans who haven't seen it should check it out.

Of course, any show about 30-something-year-old characters leaves room for a prequel. This AnnaSophia Robb-led series took its cues from the original Bushnell material, just 10 years earlier. Even though it only lasted one season, it's still fun.

For those who want more of the Star-type shows, the best bet is to go back to the show that initially put him on the map, Beverly Hills, 90210. The series ran for 10 years and kicked off the entire nighttime soap phase focused on the young and fabulous living the high life in glamorous locales.

A 20-something soap from STARZ, Sweetbitter differs from Emily in Paris in that it's in NYC instead of Europe and the restaurant industry instead of marketing. But otherwise, it hits all the same themes of a fast-paced, high-stress industry while living an extraordinary life in the fast lane.

Star's follow up to 90210 was Melrose Place. Unlike 90210, which was set in high school (albeit starring actors in their 20s), Melrose was firmly rooted in the post-college crowd. Watching it, you can see all the same themes present in Emily in Paris.

Freeform's The Bold Type is another variation on the "living in a glamorous city and pursuing a high-profile career" premise. Inspired by the life of former Cosmopolitan editor-in-chief Joanna Coles, this is a different angle on many of the same themes covered in Emily in Paris: work, love, sex, and — of course — social media.

Darren Star's most recent hit before Emily in Paris is TVLand's Younger. Starring Sutton Foster as a 40-something mistaken for a 20-something, it's a dive into the high-powered world of publishing. For Emily in Paris fans, it's got all the soapy drama and romance you could want.

One of the things Emily in Paris has in spades is a certain 20-something naïveté that prestige TV shows drifted away from in the last decade. For those looking for that sort of "party today/forget tomorrow" attitude, you would do well to head back to The O.C.

If The OC is a bit too 90210, check out the other major teen soap series from the mid-aughts, Gossip Girl. One of The CW's most successful teen dramas to date, it has all the fashionable beauty of Emily in Paris, with a whole lot of extra claws for drama.

Speaking of The CW, it also launched a fashion-and-marketing-centric show in the past year. Katy Keene, a spinoff of Riverdale, was a one-season-and-done show for the network, but it's got all the same vibes, plus over-the-top drama, that Emily in Paris fans are looking for.

But when all else fails, Emily in Paris is on Netflix for all your rewatching pleasures.