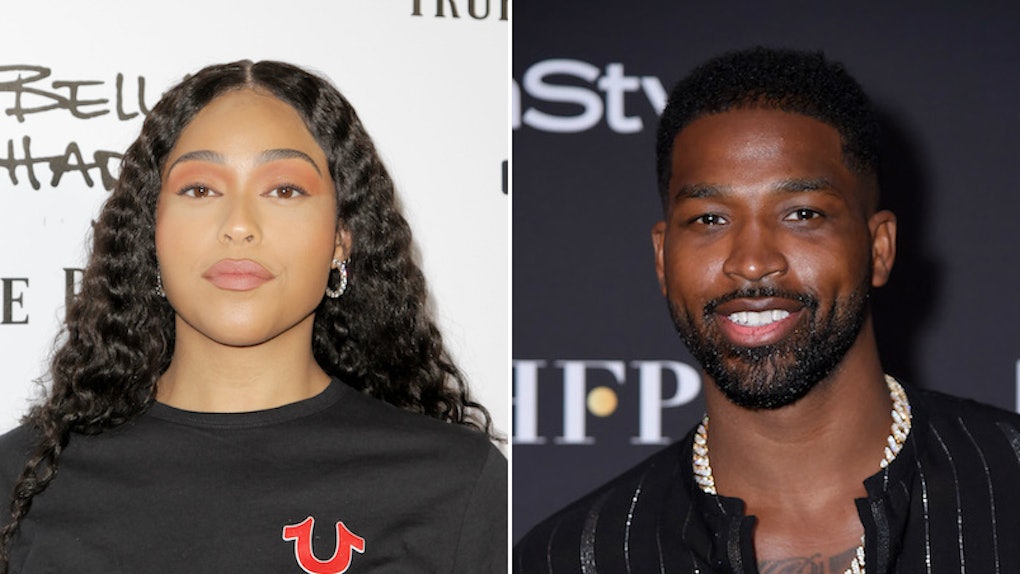 Will The Jordyn Woods & Tristan Thompson Scandal Be On 'KUWTK'? They're Reportedly Filming

I don't want to sound like I take pleasure in other people's drama, but also, isn't that kind of what reality TV is here for? Keeping Up With The Kardashians is America's greatest pastime and best guilty pleasure. My husband and I have tried putting our finger on what is so damn compelling about this family, and we think it's a combination of watching people with that kind of fame and money live alongside the human's natural inclination to engage in conflict. You better believe I'm asking: will the Jordyn Woods and Tristan Thompson scandal be on KUWTK? Based on reports, it sounds like it's a strong maybe.

In the past, the Kardashians have incorporated a healthy mix of filming major family moments and keeping some things private. For example, Kylie Jenner's pregnancy was kept completely off cameras. On the flip side, Kim ended up talking with producers about her traumatic Paris robbery in 2016. Most of the time, fans will know what's going on already without the show spoon-feeding them the specifics. (Think when Kim got the phone call about Kanye West's reported hospitalization or all of the secrecy surrounding Khloé's former marriage to Lamar Odom.) In both of those circumstances, fans already knew what was happening, but the show only gave us tidbits.

In the case of Jordyn Woods and Tristan Thompson's cheating rumors scandal, sources told US Weekly that there's a chance it might make it to air. Elite Daily reached out to both Thompson and Woods' teams for comment on the cheating rumors but did not hear back by the time of publication.

Apparently, due to the KUWTK's shooting schedule, cameras are reportedly rolling as we speak on all the dramz. "Because Keeping Up With the Kardashians is currently in production, cameras are capturing the situations as it unfolds,” a source explained. However, they added, “It’s unclear what they’ll actually end up using.” Elite Daily reached out to the Kardashians' team for confirmation on the report, but did not hear back by the time of publication.

Here's what we do know, if it's true Khloé broke things off with Thompson the moment she found out about the rumor, then that will have to be explained somehow, some way. Thompson and Kardashian share daughter True, who arrived just days after it was revealed Thompson cheated on Khloé with multiple women back in April 2018. Since then, Khloé has seemed to be stuck in limbo, grappling with trying to work things out with Thompson for the betterment of their family or calling things off completely. Elite Daily reached out to Kardashian and Thompson's teams for comment on their reported breakup, but did not hear back by the time of publication.

The first time Thompson was caught cheating, that aftermath did end up playing out on the show. Fans watched as sisters Kim and Kourtney confronted Thompson in the delivery room just moments after True arrived. There was a series of following/unfollowing stuff that went down on Instagram. Today, most members of the family have unfollowed both Thompson and Woods.

On March 1, Woods will be going an interview with Jada Pinkett Smith on her talk show Red Table Talk. Perhaps fans will learn more about the probability of all of this going down in the upcoming season of KUWTK then. (Fingers crossed!)