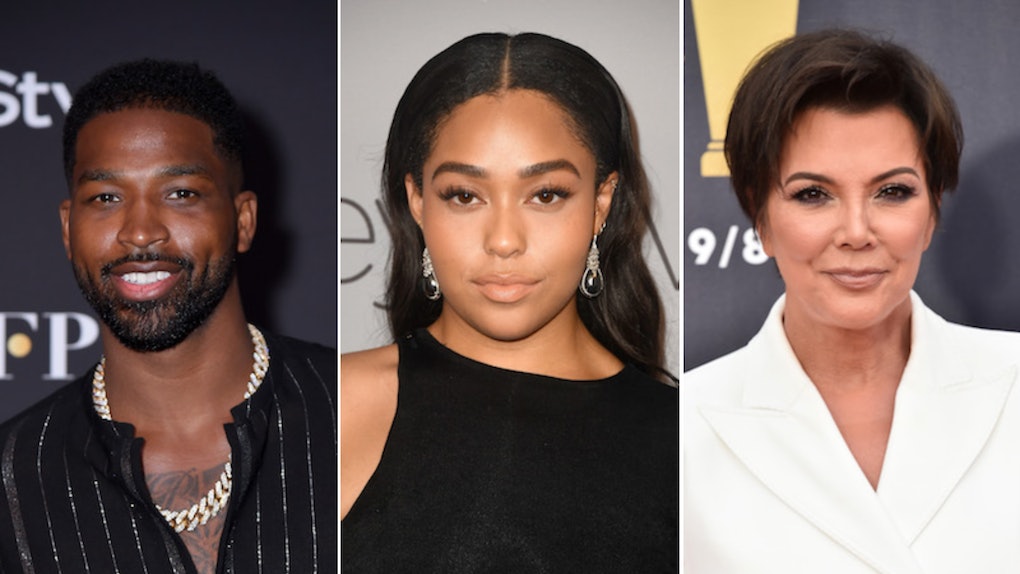 I've obviously just woken up in the Twilight zone, so please excuse me if it takes me a minute to adjust. Reports are saying Khloé Kardashian's boyfriend Tristan Thompson cheated on her again, but this time, it was reportedly with Kylie Jenner's best friend Jordyn Woods. While I'm full-on spinning out over here, the Kardashian's reaction to Tristan and Jordyn Woods' cheating rumors was reportedly pretty bad, which throws raging gasoline on this already totally disorienting fire. Elite Daily has reached out to Kardashian, Thompson, and Woods' teams for comment on the cheating reports, but did not hear back by the time of publication.

OK. So, you guys remember that Thompson reportedly cheated on Khloé with multiple women during her pregnancy with their baby True. All of this came out in the press literal days before Khloé went into labor. Despite the public outcry (and the conflicted feelings within her family), Khloé made the decision to stick by Thompson and try to make it work. It's obviously been a less than ideal situation, but fans slowly but surely warmed up to the idea that Thompson might not be going anywhere.

TMZ dropped reports claiming Thompson flew to Los Angeles so they could be together on Valentine's Day. However, according to TMZ's sources, Thompson's trip took a turn when he attended a party that Woods was reportedly at, too, on Sunday, Feb. 17. There, the two were reportedly spotted flirting while getting nice and cozy, and even reportedly made out, like, in front of people. After that, the report says Woods returned to Thompson's house where she stayed until the wee hours of the morning. Kardashian reportedly found out about it on Monday, Feb. 18, and reportedly broke up with Thompson ASAP as a result.

As for Khloé's family, it sounds like both Thompson and Woods better brace themselves. According to a source who spoke with People magazine, "The whole family is furious." The insider added they all feel "blindsided" and are "beyond angry and disgusted" by Woods' reported betrayal. Kylie is reportedly left in the middle and doesn't know what to do. Sources told E! News while the "whole family is writing Jordyn off," Kylie "is very torn on how to handle the situation."

Elite Daily also reached out to the Kardashians' team for further comment on their reported response but did not hear back by the time of publication.

I have a lot of theories. Like, a lot. But, I can't really settle into any particular mindset without a comment from Woods. Thompson reportedly posted a tweet that said "FAKE NEWS" following the wave of reports, but it has since been deleted.

Other than that, no one has gone on the record about the situation.

Khloé did leave a telling comment on one Instagram account who reported the rumor, though. Hollywood Unlocked's CEO, Jason Lee, posted a video reporting the news and said Thompson "ain't sh*t." In a radical move, Khloé posted a bunch of shouting emojis in the comments. Her bestie Malika Haqq followed up by writing, "STRONG FACTS." Both comments seem to suggest they believe the rumors are true.

To make things murkier, reports are also suggesting Thompson made sure to confiscate the phones of everyone who was in attendance at the party. Not a great look, Tristan.