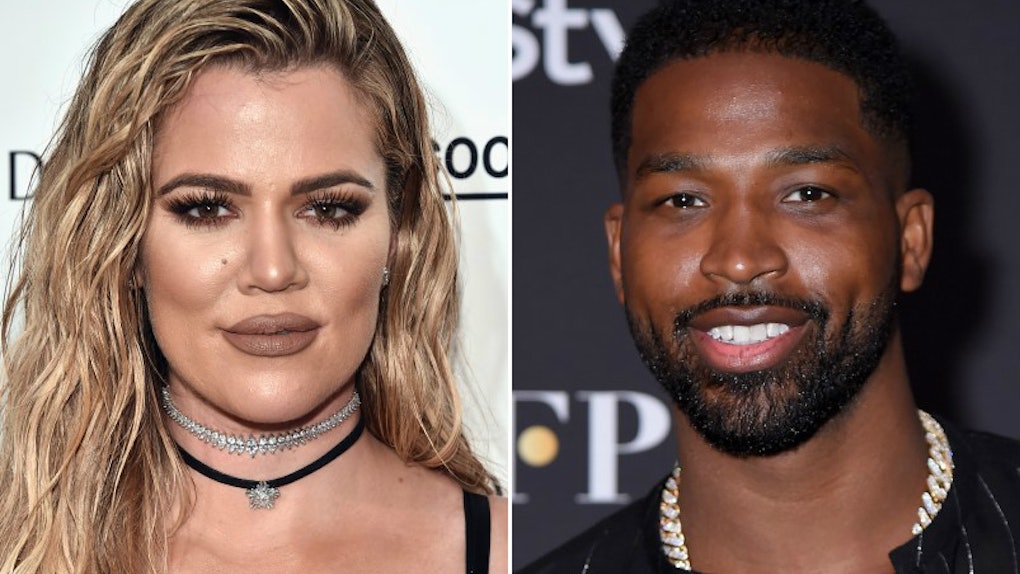 There’s a lot going on in Khloé Kardashian’s world right now. On Tuesday, Feb. 19, news broke that Kardashian had reportedly split with Tristan Thompson. But as if that wasn’t enough, there have also been rumors swirling that Thompson cheated on Kardashian with Kylie Jenner’s best friend Jordyn Woods. Elite Daily reached out to Kardashian, Thompson, and Woods' teams for comment on the cheating rumors, but did not hear back by the time of publication. Apparently, Kardashian has some thoughts about this whole thing, but she’s not exactly willing to speak them out loud just yet. Khloé Kardashian’s reaction to rumors Tristan Thompson cheated with Jordyn Woods will have you deciphering emojis.

According to an Us Weekly report about the breakup, Woods and Thompson were reportedly seen at a house party making out and this reportedly caused Kardashian to end the relationship when she got word of the reported infidelity. According to E!, Thompson Reportedly denied the reports in a now-deleted tweet that simply said, "FAKE NEWS."

Sources claim that Kardashian and the rest of her family are in shock over the reports.

“Khloé loved Jordyn before this. This is completely shocking to Khloé’s family,” a source told Us Weekly. Elite Daily reached out to Kardashian's team for comment on the report, but did not hear back by the time of publication.

Another source revealed that Kardashian is “devastated” by the news. They also explained that all this is “out of character for Jordyn and no one expected this to happen.” So, it sounds like everything that’s unfolded recently was totally out of left field.

After the cheating reports broke, Kardashian reacted to a Hollywood Unlocked Instagram post in which its CEO, Jason Lee, went into detail about the reports surrounding her, Thompson, and Woods. According to Lee, one of his writers attended Thompson's house party, where Thompson reportedly confiscated everyone in attendance's phones. He claims the writer saw Thompson and Woods "all over each other, and, it wasn’t just ‘friendly.’ They couldn’t keep their hands off of each other.”

Kardashian responded to the post with several shouting emojis. Her best friend, Malika Haqq, also commented, writing, "STRONG FACTS." Their comments seemingly signal that that believe the rumors are true and that they're seconding Lee's opinion that Thompson "ain't sh*t."

You can see the clarification from Hollywood Unlocked and Kardashian’s response to it down below:

So, I guess that’s some food for thought, huh? This isn't the first time Thompson has been accused of stepping out on Kardashian. Back in April 2018, just days before Kardashian gave birth to her and Thompson’s daughter True, the Daily Mail published video that seemed to show Thompson cheating on Kardashian.

Since then, the relationship has been rocky, but Kardashian has been, by all accounts, very dedicated to making it work for the sake of True. In a Nov. 7 report from People magazine, a source close to the couple revealed that Kardashian was trying her best to keep the relationship going.

“On the outside, she acts all tough, but it still gets to her. But what it comes down to is that Khloé wants True to grow up in a family with both parents,” the source said. “She wants True to spend as much time with her dad as possible. She believes that True needs a mom and dad in her life.”

So, I guess that explains why Kardashian stayed in the relationship, but with these recent developments, it's not clear if that will continue.